Attention, Legal Scholars: Is This Constitutional?

In my recent post on creeping fundamentalism in Israel, I included a picture but didn’t explain why. I wanted to talk about it some more, because it seems to me that what it depicts is a possible constitutional violation, and I was hoping I could get opinions from people better versed in constitutional law than I am. 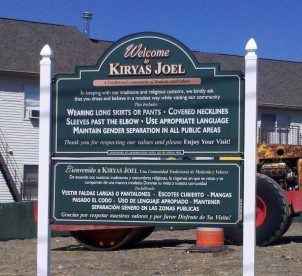 This was taken in upstate New York, near where I used to live. The sign stands at the entrance to Kiryas Joel, a village founded by ultra-Orthodox Hasidic Jews in the 1970s. For years, the village has been clashing with the surrounding towns on one issue after another: KJ’s rapid population growth and attempts to annex surrounding land; the high proportion of residents on welfare; their tendency to vote as a bloc; their refusal to put their children on a school bus if a woman is driving (yes, really), and worse. One case, in which the state effectively created a separate school district just for the village, went to the Supreme Court, which ruled against it.

And now, there’s this sign. I saw it while I was visiting family a few weeks ago and took this photo with my phone.

So, my question is this: Is it constitutional to put a sign like this on public land? (I’m not positive whether the land under the sign is privately owned, but it’s just off to the side of a public road – and it certainly appears to be speaking on behalf of the village itself.) Can any community really tell visitors how to dress or request that they “maintain gender separation in all public areas”?

Obviously, this ridiculous demand doesn’t and couldn’t have the force of law behind it. But is it legal even to ask? You’ll notice that the sign makes this request “in keeping with our traditions and religious customs”, which is basically an admission that there’s no secular purpose for it, that it’s being requested to placate the beliefs of a religious sect. How could a sign like that not transgress the separation of church and state?

September 12, 2010
The Language of God: Rusty Containers
Next Post