One-Half of One Cent 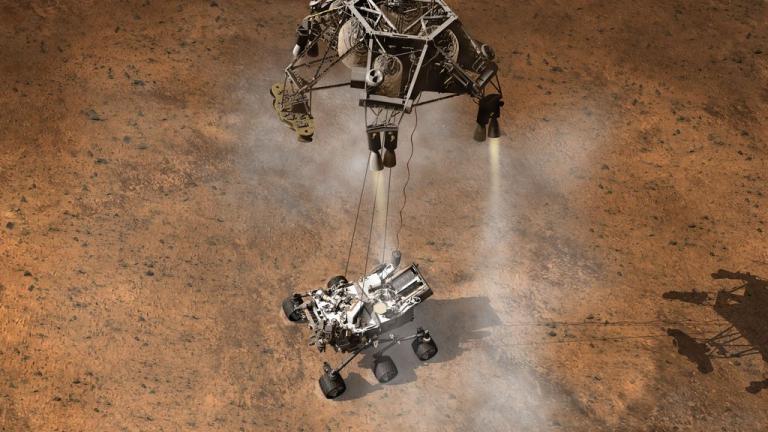 As I’m writing this post, NASA’s latest Mars mission – the Mars Science Laboratory, also known as Curiosity – is just hours away from its destination. By the time you read this, we’ll know if it touched down safely on the surface of the red planet.

Curiosity is a robot rover about the size of an SUV, much larger than previous Mars rovers, and carries more scientific equipment. That makes it too big and too heavy to drop to the surface and bounce to a stop protected by airbags, the way that its precursors Spirit and Opportunity were. Instead, NASA’s engineers have designed a complex, multi-stage landing scheme: first, Curiosity’s heat-shielded capsule, traveling at 13,000 mph, will slow to Mach 2 by aerobraking in the Martian atmosphere. While still traveling at supersonic velocity, it will deploy a gigantic parachute to slow down further. Finally, just above the planet’s surface, the capsule will fire retrorockets to hover in place and lower Curiosity down to the ground on a cable.

Since Mars is too far from Earth for NASA to control the mission in real-time, all of this will have to be coordinated by Curiosity’s autonomous software. By the time the engineers receive any signal, the landing will either have succeeded or crashed spectacularly. This is the most technically ambitious scheme ever contrived for landing on the surface of another planet.

How much money was spent for this daring and ambitious mission? The total cost of Curiosity is $2.5 billion, while NASA’s overall budget is about $18 billion. This sounds like a lot, but actually it’s about one-half of one percent of the entire federal budget. To put it another way, as I once heard Neil deGrasse Tyson do in a talk: for every dollar you pay in federal taxes, slightly more than half a penny goes to NASA.

And this half a penny from each of us has brought an incredible wealth of knowledge about our solar system, the origins of our world and our place in the universe. It’s brought us not just Curiosity and the other Mars missions, but a whole fleet of spacecraft flying out from the Earth like seeds from a puffball: the New Horizons spacecraft on its way to Pluto, the Juno probe traveling to Jupiter, the MESSENGER craft orbiting Mercury, Cassini in orbit around Saturn, Dawn exploring the asteroids, and even the Voyagers, which are still transmitting data from the edge of the solar system. All this and much more was ours for one-half of one cent.

Where does the lion’s share of our taxes go? As Paul Krugman puts it, the U.S. government is basically an insurance company with an army: Social Security, Medicare, Medicaid, and the military make up the large majority of federal discretionary spending. Everything else we normally think of as “government” – education, law enforcement, national parks, roads and bridges, unemployment insurance, food stamps, farm subsidies, foreign aid, art and science funding, international diplomacy – is a relative minority of the budget. (See here for a more detailed breakdown.)

Just imagine what we could do if we were willing to devote more money to pure scientific exploration. Imagine if, for example, we reduced the U.S. military budget (which is roughly equal to the rest of the world’s military spending combined) and used the peacetime surplus to promote understanding of the universe. We wouldn’t even have to put aerospace workers out of a job – their role could just be transferred from building weapons to building machines for us to explore the cosmos.

We could build and launch a fleet of Hubble telescopes. We could redouble the hunt for extrasolar planets that might support life. We could return to the moon, or we could seriously discuss the possibility of sending human beings to Mars, either to visit to establish a colony. We could finally settle the question of whether there’s any life on Mars and Venus, or anywhere else in the solar system. (Curiosity is designed to look for signs of past environments conducive to life, not for life per se.)

Just as with the discovery of the Higgs boson, our exploration of the cosmos shows what humanity at its best is capable of, and we should be both exalted and ashamed by that comparison. We squander so many lives and resources fighting over ancient religions and national ideologies, but even the comparative pittance we devote to science gives us such a vaster benefit. The stars above us ought to serve as a lesson that the things we have in common are so much more important than the trivialities we fight over – if only we’d look up.

Image: Concept art of Curiosity being lowered to the Martian surface by the capsule’s “sky crane,” via NASA

August 8, 2012 Boycott the Boy Scouts
Recent Comments
0 | Leave a Comment
"they avowed their certainty that Jesus would bring her back to life:Despite this not being ..."
Bob Seidensticker The Strange Sad Story of Olive ..."
"...currently every single link in the "Trending at Patheos Nonreligious" is to a "I'm moving ..."
OverlappingMagisteria Announcing: OnlySky
"I've already signed up on Jonathan Pearce's site. Looking forward to the new digs."
ORAXX Announcing: OnlySky
"Interesting. Although if Andrew Hall is coming along, I hope the new site will make ..."
bificommander Announcing: OnlySky
Browse Our Archives
get the latest updates from
Daylight Atheism
and the Patheos
Nonreligious
Channel
POPULAR AT PATHEOS Nonreligious
1