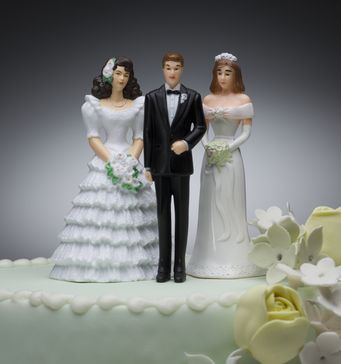 [Since the Supreme Court struck down part of DOMA this week, anti-gay Christian groups have been trying to start a trend on Twitter, under the hashtag “#1m1w“, to promote the “one man-one woman” view of marriage that the Bible allegedly teaches. With that in mind, it’s probably a good time to repost this essay from 2008 about the biblical endorsements of polygamy, to remind the religious right about these verses they inexplicably seem to keep forgetting.]

In recent years, anti-gay bigots operating under the guise of “defending traditional marriage” have made many statements like this one:

“Since the dawn of mankind, the sacred bond of marriage has been correctly defined as a union between one woman and one man.

…Our views on marriage are shaped not only by America’s laws, but by God’s laws. It is part of the shared heritage of the civilized world.”

Pat Boone is wrong on both counts, even by his own standards. What the religious right would like very much for us all to forget is that marriage has not been “defined as a union between one woman and one man” since “the dawn of mankind”. On the contrary, the very written records that Boone and others hail as “God’s laws” show that quite different standards have often been in vogue. To see just what I mean, consider the following little-known Bible verses – the ones which show that, in Old Testament times, polygamy was not just accepted but common.

One of the Bible’s earliest polygamists was the Israelite patriarch Jacob. When Jacob lusted after Rachel, the daughter of the wealthy landowner Laban, Laban pulled a switcheroo and sent his other daughter, Leah, to the bridal bed instead. When Jacob discovered that he had been tricked, he didn’t bemoan the fact that his wife was not the woman he wanted. Nor did he seek a divorce. Nope, he bargained with Laban and ended up marrying both his daughters!

“And Jacob did so, and fulfilled her week: and he gave him Rachel his daughter to wife also.”

Ultimately, Jacob ended up with four wives/concubines – not just Leah and Rachel but their handmaids Bilhah and Zilpah. Jacob was not condemned by God for this arrangement, and in fact the twelve children he had by his multiple wives ended up becoming the progenitors of the twelve tribes of Israel.

Jacob was just one of many polygamists in the Bible. Some others included Gideon (Judges 8:30), Elkanah, father of the prophet Samuel (1 Samuel 1:2), and kings such as Abijah (2 Chronicles 13:21), Rehoboam (2 Chronicles 11:21), and Jehoiada (2 Chronicles 24:3). Most famously, Solomon himself had “seven hundred wives… and three hundred concubines” (2 Kings 11:3). None of these royal polygamists were chastised or punished by God for this – except for Solomon, but even here the exception proves the rule. According to the Bible, Solomon’s sin was not that he married many wives, but that he married foreign wives who turned him away from worshipping Yahweh (11:4).

Was polygamy just a Hebrew tribal custom, disliked but tolerated by God? Hardly: the Torah itself, God’s law book, endorses polygamy by giving rules on when and how a man was allowed to take more than one wife and how the rules of inheritance worked in this situation.

“If he take him another wife; her food, her raiment, and her duty of marriage, shall he not diminish.”

Like many big men in primitive tribal societies, the biblical kings and patriarchs took multiple wives as status symbols, a way of showing off their wealth and power. Naturally, the women were treated as property and expected to be subservient to this arrangement. If Yahweh had problems with this arrangement, he never said so; like many fictional characters, he evidently shared the moral outlook of his creators.

By the New Testament, things seem to have changed, though verses commanding that bishops could only marry one wife (1 Timothy 3:2) suggest that the custom still lingered. And even in the New Testament, the polygamists of old times were never explicitly condemned. On the contrary, polygamists like Gideon were proclaimed to be heroes of faith (Hebrews 11:32).

Biblical polygamy undercuts the anti-gay bigots by showing that the definition of marriage has evolved through history and is still doing so. Most of this change has been for the better, making marriage an ever-closer approximation to the ideal of a joining between consenting equals, rather than a transfer of female property from father to husband, as it once was. Tragically, even today there are some sects that keep alive the abuses of patriarchy and polygamy, perpetuating the same cruel, unjust treatment of women that was the custom in biblical days. Like the opponents of gay marriage, their addiction to unjust and irrational dogma continues to cause harm to real people in the name of faith.