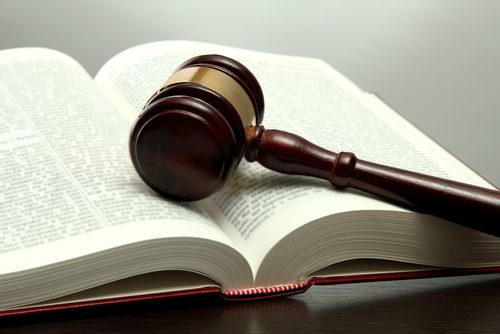 The next chapter opens in Colorado, where Dagny is personally supervising the construction of the Rio Norte Line in the shadow of Ellis Wyatt’s oil derricks. As we found out earlier, her best contractor, McNamara, mysteriously closed his company and vanished, so she’s being forced to rely on a replacement contractor named Ben Nealy. (We’re told he has “a soft, sullen face” and skin with “the tinge of butter” [p.158], so you can guess whether he’s competent or not.)

She looked at the spikes in the rail at her feet. They meant the night when she had heard that Summit Casting of Illinois, the only company willing to make spikes of Rearden Metal, had gone bankrupt, with half of her order undelivered. She had flown to Chicago, that night, she had got three lawyers, a judge and a state legislator out of bed, she had bribed two of them and threatened the others, she had obtained a paper that was an emergency permit of a legality no one would ever be able to untangle, she had had the padlocked doors of the Summit Casting plant unlocked and a random, half-dressed crew working at the smelters before the windows had turned gray with daylight. [p.155]

So, here’s a question. The company that was making her railroad spikes went bankrupt, so she flew to Chicago in the middle of the night and bribed a judge and a state legislator to do… what, exactly?

I mean, sure, evil socialists shut down businesses for no reason because they hate success, blah blah blah. If it were some kind of random, inexplicable government directive closing down a healthy company, which is the kind of thing that happens in Randworld, then I can see how Dagny’s threatening and bribing lawmakers might help.

But bankruptcy is a normal part of the business life cycle. Even in a capitalist economy completely free of rules and regulations, it’s the kind of thing that will happen sometimes. Yes, this was the only company that could make the spikes she needed to complete the railroad line that the future of her company depends on, but so what? As Rand’s protagonists constantly remind us, just because you need something doesn’t mean you’re entitled to have it. So how did Dagny circumvent the operation of supply and demand? What did that emergency permit allow her to do?

There’s only two scenarios that make any sense here. Either Dagny bribed the judge to force Summit’s owners to keep the company open against their will, losing money all the while; or else she bribed the judge to allow her to seize Summit’s factory and equipment and run them as if they were her own property. Either way, how is this not a gross violation of Objectivism’s cast-iron capitalist code?

I’ve mentioned that Rand’s protagonists are consistently depicted as perfect and infallible, never budging an inch from their principles regardless of pressure or temptation. This scene might be read as a contradiction of that, except that I don’t think Rand herself thought of it as such, probably because she never fleshed out the details in her head to a sufficient level of clarity to see the problem.

But what she does make clear, yet again, is that in pursuit of profit, her heroes are entitled to do absolutely anything they want. They can offer bribes; they can make threats; they can commit actual violence; they can break any rule or law that’s standing in their way. As long as their goal is to make money, we’re meant to view this conduct as not just acceptable, but noble and praiseworthy.

Unfortunately, there’s no shortage of businesses in the real world that feel the same way. That’s why the U.S. government passed the Foreign Corrupt Practices Act, a law meant to curb the problem of rampant corporate bribe-giving around the world by making it illegal for American companies to bribe foreign officials. (The U.K. has a corresponding Bribery Act.) This law was spurred by scandals in the 1970s, such as when it was revealed that the aerospace company Lockheed had been bribing government officials in Europe and Japan to favor its company’s products in purchase orders.

This kind of thing isn’t confined to history – the list of companies that have been prosecuted under the FCPA is staggeringly long. Most recently, we’ve heard about an explosive scandal in which Wal-Mart allegedly bribed Mexican government officials on a vast scale to obtain construction permits much faster than its rivals, and stifled an internal investigation when a whistleblower came forward.

In one meeting where the bribery case was discussed, H. Lee Scott Jr., then Wal-Mart’s chief executive, rebuked internal investigators for being overly aggressive. Days later, records show, Wal-Mart’s top lawyer arranged to ship the internal investigators’ files on the case to Mexico City. Primary responsibility for the investigation was then given to the general counsel of Wal-Mart de Mexico — a remarkable choice since the same general counsel was alleged to have authorized bribes.

Just imagine. If a prosecutor accused Taggart Transcontinental of bribing a judge, would it be right for Jim to put Dagny Taggart in charge of the internal investigation?

Obviously, there are good reasons for bribery to be illegal. By seducing decision-makers with the promise of personal gain, bribes undermine legitimate competition, making companies “win” not on the basis of delivering a superior product but merely on the basis of offering the biggest kickbacks. In the same way, bribery promotes corruption and undermines good governance, by creating an incentive to officials to line their pockets rather than to do their jobs. The corrosive effects of bribery can even create the kind of bullying, imperious, overbearing government that Rand rails against so often. (After all, didn’t Dagny effectively just teach a judge and a legislator that they can and should demand payola in exchange for special favors?) But in Rand’s world, all these considerations are brushed aside. Her heroes can do anything and still be morally guiltless, and the only evil she perceives is when the government prohibits businessmen from doing something they want to do.