This week, the U.S. government shut down for the first time in 17 years, thanks to intransigent House Republicans who refused to pass a budget unless it included provisions to gut or delay the Affordable Care Act. Ironically, this is the same day that the new health insurance exchanges opened for business, since they’re funded by mandatory spending that’s not part of the budget process.

The threat of a government shutdown was one of the last cards played by a political party that’s tried absolutely everything in their power to obstruct Obamacare. They originally tried to block it in the Senate with a filibuster, but a supermajority voted to proceed to an up-or-down vote. Not a single Republican in Congress voted for it, but it passed in spite of them. They took their case to the Supreme Court, which upheld it. They ran the last presidential election as a referendum on repealing it, and lost decisively.

As the law takes effect, red states have refused to help set up the exchanges where people can buy insurance, and some have passed nuisance regulations to obstruct the “navigators” who help people understand the new market. Going even further into the theater of the absurd, deep-pocketed groups like the Koch brothers and the Heritage Foundation are running an advertising blitz trying to persuade people not to sign up for the insurance they’re now able to purchase. (One ad implied that buying subsidized health insurance through an exchange is like being raped by the government. This, from the party of mandatory medically unnecessary transvaginal ultrasounds.)

And now we’re in the midst of of a government shutdown. The Republicans have lost at every possible step of the normal political process – losing in Congress, losing in the courts, losing in the popular vote – but rather than accept defeat, they’re trying to make the country ungovernable if their demands aren’t met. This is pure blackmail, no different than any other ransom demand from a hostage taker.

There’s only one possible reason they’re so absolutist in their resistance to Obamacare: not because they think it’s going to fail, but because they believe it’s going to succeed. If they really believed that the law would be a huge failure, they could just sit back, wait for it to collapse under its own unpopularity, and then gloat and say “we told you so”. The fact that they’re fighting so tenaciously implies that they’re worried people are going to like it, and they know that if it’s a success, their original opposition will haunt them. They chose to redouble their opposition, trying to prevent voters from getting a chance to make up their own minds about it.

The GOP doesn’t even have the thin excuse of having an alternative to propose, because Obamacare is the alternative. Its basic structure was originally a conservative idea, conceived of by groups like the Heritage Foundation and proposed by a Republican Congress in the 1990s as their alternative to Hillary Clinton’s health-care plan. As we liberals never tire of pointing out, it’s also essentially identical to the plan enacted in Massachusetts by Mitt Romney. But rather than declare victory because the Democrats passed what was originally a conservative plan – which, truthfully, they would’ve had every right to do – they’ve become fanatical opponents of their own idea, a bizarre result of the GOP’s steady rightward slide and its rigid determination to deny a Democratic president any major domestic achievement.

It’s hard to see where this is going to end. Most of the madness is coming from Republicans who represent deep-red, heavily gerrymandered districts, drawn so that it’s almost impossible for them to lose except to a challenger who’s even more conservative. It’s possible that the blowback of a government shutdown will hurt them, but I don’t think it’s likely. We’ve already seen that Republicans can cast votes that kick their own constituents in the teeth and pay no penalty, just as long as they make the right noises about culture-war issues. In the same way, their desire to make Obama fail is so strong that they’re willing to wreck the country in the bargain, and deny millions of people access to medical care they’ve long lacked. What else can we call this, other than profoundly evil?

September 30, 2013
When an Atheist Falls From Grace: On Teresa MacBain
Next Post 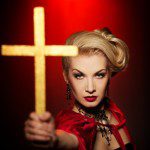 October 4, 2013 Repost: The Power of Christ Compels You
Recent Comments
0 | Leave a Comment
"More or less Marvin Harris's explanation in Cows, Pigs, War, Witches."
TBP100 The Fountainhead: Wool and Linen
"Thank you very much! It's an honor to be mentioned in the same sentence as ..."
Adam Lee Commonwealth, III.XVII: Project Chicxulub
"The end of an era. Well, here's hoping for a succesfull new site."
bificommander There’s a Change Coming…
"Yes, it should! I need to correct that."
Adam Lee Commonwealth, III.XVII: Project Chicxulub
Browse Our Archives
get the latest from
Nonreligious
Sign up for our newsletter
POPULAR AT PATHEOS Nonreligious
1