With the John Galt Line almost ready for its maiden voyage, Dagny invites reporters to her office for a big press conference:

“Now I must tell you about the opening of the John Galt Line,” said Dagny. “The first train will depart from the station of Taggart Transcontinental in Cheyenne, Wyoming, at four P.M. on July twenty-second. It will be a freight special, consisting of eighty cars… It will run non-stop to Wyatt Junction, Colorado, traveling at an average speed of one hundred miles per hour. I beg your pardon?” she asked, hearing the long, low sound of a whistle.

“What did you say, Miss Taggart?”

“I said, one hundred miles per hour – grades, curves and all.”

“But shouldn’t you cut the speed below normal rather than… Miss Taggart, don’t you have any consideration whatever for public opinion?”

“But I do. If it weren’t for public opinion, an average speed of sixty-five miles per hour would have been quite sufficient.” [p.221]

And it’s not just over grades and curves, either – a later line confirms that Dagny’s what-could-possibly-go-wrong plan includes driving the train at this tremendous speed through several populated areas, basically for reasons of spite. This was accomplished by bribing and threatening mayors, police and government regulators, which, as we’ve seen, is entirely permissible in Rand’s system of morality:

Eddie Willers… stood on the platform, surrounded by Taggart executives, division heads, civic leaders, and the various local officials who had been outargued, bribed or threatened to obtain permits to run a train through town zones at a hundred miles an hour. [p.222]

This plan raises the very pertinent question of safety, and Rand doesn’t ignore that. The topic is brought up at Dagny’s press conference by one of the reporters, who’s helpfully described as ugly so we know to disregard his concern.

A man with a mouth shaped as a permanent sneer asked, “Well, what I want to know, as Bertram Scudder stated, is what protection do we have against your Line being no good?”

This basically sums up Rand’s attitude toward safety, which is “Caveat emptor”. If you don’t trust a business not to blow you up, poison you, or give you cancer, then don’t buy their product, end of story.

Except that that’s not the end of the story, because when something goes wrong badly enough, it can be a danger to innocent bystanders, too. Remember, Dagny has just said she’s going to run a freight train at a hundred miles per hour through the middle of several towns! If there’s an accident, it’s not just the people riding on it who could be hurt.

Now we know that nothing will go wrong, because Rand’s fictional heroes have plot armor which ensures their every decision, no matter how ill-advised, will turn out for the best. But let’s talk about what can happen in reality to businessmen who make risky, dangerous decisions.

In July 2013, a freight train operated by the Montreal, Maine and Atlantic Railway, carrying 72 carloads of crude oil from North Dakota’s Bakken Formation, set out from Montreal to a refinery in Brownville Junction, Maine. The entire train had only one crew member, an engineer. Around 11 PM, after his day’s shift had ended, he stopped several miles outside a Quebec town called Lac-Mégantic. He parked the train on the main line and caught a taxi into town to get a hotel room for the night.

Sometime during the night, the brakes failed and the unattended train began to roll. The railroad where it was parked was on a downward grade, so it steadily gathered speed. By the time the runaway train entered the downtown of Lac-Mégantic, it was moving at around 65 MPH.

By the time the train approached the main switch in downtown, witnesses said, it was going so fast that the crossing signals did not even have time to come on…. The infernal noise and the sparks shooting from its wheels were all the warning people in the street needed to run for their lives. (source)

Where the rail crossed Frontenac Street, the town’s main road, it had a curve that limits the top speed of a train to 10 MPH. When the train hit that curve, it derailed and the oil tanker cars ruptured and exploded.

Witnesses described a wall of fire a hundred feet high, an earthquake-like explosion that could be felt more than a mile away. More than thirty buildings, about half the downtown area of Lac-Mégantic, were destroyed. At least 42 people were killed, and thousands more had to be evacuated. The Lac-Mégantic catastrophe ranks as one of the worst railroad disasters in Canadian history.

Legal liability is still being fought out, but one cause being cited is that the train used DOT-111A tanker cars, which had previously been criticized for a tendency to rupture in accidents, and a proposal to require upgrades or replacements was predictably fought by industry representatives who said it would be too expensive. But remember, if you’re worried about a railroad’s safety record, just don’t ride on it!

We could also bring up the 1984 Bhopal disaster, at a Union Carbide pesticide plant that leaked a cloud of toxic gas, killing over 2,000 people and possibly more than 15,000. As with the Lac-Mégantic disaster, corporate negligence and inadequate or broken safety systems were blamed for contributing to the catastrophe. (You may remember that Mother Teresa commented on the disaster; her sole advice was that we should “forgive” the plant owners.)

Just as there’s no crime in Randworld, except for government bureaucrats who want to deprive honest businessmen of the products of their labor, there’s also no danger from corporate negligence. The only disasters that happen (like the train accident later in the book) are caused by political pressure, never by businesses making bad decisions or cutting corners in the name of profit.

If you want a less one-sided and more realistic view, Jason Wexler has written a short satirical fiction, Dagny Is Wrong After All, that shows how Rand’s heroes’ risky decisions might play out in real life. Be warned, it’s quite dark! 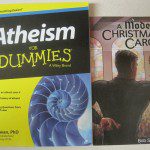 December 3, 2013 December 2013 Book Reviews
Recent Comments
0 | Leave a Comment
Browse Our Archives
get the latest from
Daylight Atheism
Sign up for our newsletter
POPULAR AT PATHEOS Nonreligious
1