Atlas Shrugged: The Price of Progress 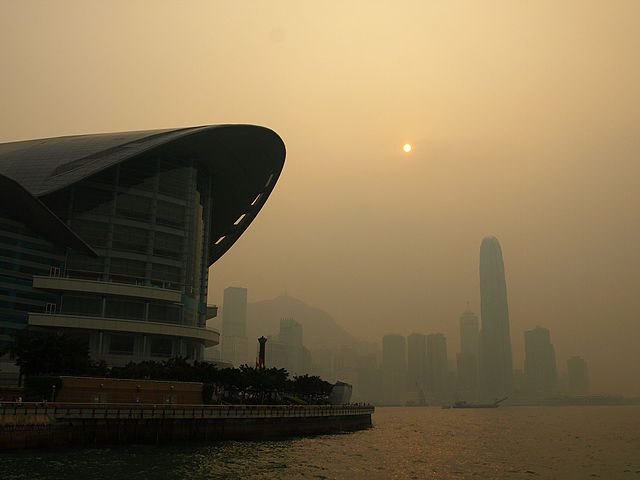 As I’ve mentioned before, even though Atlas Shrugged is intended to be a complete guide to Ayn Rand’s economic and political philosophy, there are some fundamental aspects of an economy that she never addresses or makes only the vaguest of passing allusions to. I’m going to linger on the scene we discussed last time, because it has one of those fleeting mentions that’s of enormous importance.

Mr. Mowen looked at the skyline, at the belts, the wheels, the smoke – the smoke that settled heavily, peacefully across the evening air, stretching in a long haze all the way to the city of New York somewhere beyond the sunset – and he felt reassured by the thought of New York in its ring of sacred fires, the ring of smokestacks, gas tanks, cranes and high tension lines. [p.255]

Remember, this is in Connecticut. Even if it’s right on the state line, say near Greenwich, a plume of coal smoke that stretches all the way to New York City must be about twenty miles long at a minimum, and likely much longer.

Some people might find this thought alarming, but Rand clearly finds it romantic, even beautiful. Just look at her word choices: peaceful, reassuring, “sacred”. To her mind, it seems, smoke from burning coal and other forms of pollution are the visible evidence of capitalism at work and nothing more than that.

The reality is that coal is one of the dirtiest power sources there is. Nearly all coal deposits contain impurities like sulfur dioxide, which rises into the atmosphere when the coal is burned and reacts with water to form sulfuric acid, falling again in the form of acid rain that poisons wetlands and kills vegetation. Most coal also contains mercury, which is released into the environment by combustion and accumulates up the food chain (this is why pregnant women are advised not to eat too much tuna fish). And burning even the purest coal emits huge quantities of particulate matter – soot – which escapes into the atmosphere, forming that “haze” Rand talks about. But we get a lot more out of it than scenic sunsets: soot in the air causes asthma and all kinds of respiratory ailments, even heart disease.

And then there’s the problem of what’s left after coal is burned: fly ash, which contains a wide variety of heavy metals. One of the worst environmental disasters in recent U.S. history happened in 2008 in Kingston, Tennessee, when a containment pond ruptured and disgorged over a billion gallons of ash slurry, a hundred times the volume of the Exxon Valdez spill, destroying homes and choking waterways with toxic sludge.

But the U.S., which has had decades of environmental oversight, is at best a mild example of how dangerous pollution can be. To see the true extent of the problem, look at a developing country with heavy industry and light regulation, like China. In Beijing, the smog has gotten so bad it’s been described as “like standing downwind from a forest fire“, and the U.S. embassy has embarrassed and angered the Chinese government by posting, on its Twitter account, accurate measurements of airborne particulates. It’s been estimated that as many as 400,000 Chinese people die prematurely each year from illnesses stemming from air pollution.

Nor is this just a problem in big cities. In the Chinese countryside, where heavy industrial plants are next door to rural farm communities, millions of acres of land are too contaminated to grow food. Hunan Province, China’s rice bowl, has been rocked by fears of “cadmium rice“, which is every bit as toxic as it sounds. (See also.)

Rand’s philosophy, as we’ve seen, is that if you don’t trust a business, just don’t buy their products. But that advice is no help when a company produces pollution that poisons you whether you do business with them or not.

It’s not that there are no technological fixes for any of these problems. It’s possible to install scrubbers and other safety measures that cut down the pollution a power plant emits. But in a Rand-style libertarian world, what incentive would there be to do that? After all, installing those safety measures inevitably costs money, which forces companies to raise the prices they charge their customers. This means that in true tragedy-of-the-commons fashion, socially responsible businesses will always be undercut by ones that aren’t so conscientious. (Granted, it’s probably bad business to poison your customers, but what if the power you generate is being bought by cities hundreds of miles away?)

As long as you rely on individual rational actors making decisions in their own self-interest, there’s no good way to solve this problem. The only way to prevent it is to introduce a government which can enact laws mandating that all businesses take steps to reduce the amount of pollution they emit, or otherwise clean up after themselves. It’s because of laws like the Clean Water Act that the Hudson River is no longer iridescent and filled with chemical foam, and the Cuyahoga River no longer catches fire.

But this solution was, of course, bitterly opposed by Ayn Rand. According to Jennifer Burns’ biography Goddess of the Market, Rand reviled the environmental movement as “the Anti-Industrial Revolution” and claimed that “it is technology and progress that the nature-lovers are out to destroy”. She insisted that pollution was “a scientific, technological problem – not a political one – and it can be solved only by technology”. The most reasonable reading of this is that in Rand’s ideal world, only the rich, who could afford hermetically sealed houses with water filters and air purifiers, would have the luxury of clean air and water. And as for the poor? Let them breathe smog!