Riding a Dinosaur Off Into the Sunset 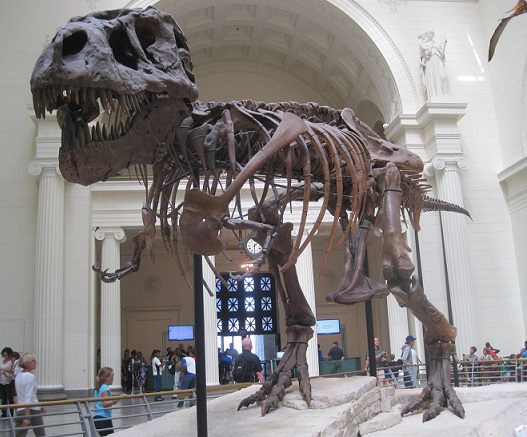 It’s conventional wisdom that when you’ve got to make an announcement but don’t want people to pay too much attention, you release it on a Friday afternoon. And when you’ve got some news that you really want to bury, you release it on Christmas Day. That’s just what the Republican party did last month, with this quiet announcement that the party establishment, in tandem with the Chamber of Commerce, is launching a $50 million political offensive – not against Democrats, but against other Republicans. In the words of strategist Scott Reed:

Our No. 1 focus is to make sure, when it comes to the Senate, that we have no loser candidates… That will be our mantra: No fools on our ticket.

He’s clearly thinking of “losers” like Ken Cuccinelli, Richard Mourdock, Todd Akin, and many others who made the fatal mistake of saying out loud what all Republican politicians believe. In fact, the Republicans would control the Senate now, if they hadn’t squandered so many pickup opportunities in the last two cycles by nominating incompetents. Electoral defeat, like hanging, concentrates the mind wonderfully.

I’ve written about how the Republicans are locked in an ideological downward spiral, clinging more and more tightly to a slice of white religious men as that demographic becomes a smaller and smaller part of the country as a whole. Clearly there are at least some conservatives who see the same trend and are trying to pull out of it, by purging the party of extremist religious zealots and replacing them with candidates who present a more moderate image. (Whether these candidates actually are more moderate, or just better at seeming that way, is another question entirely.)

But the problem they’re certain to face is that the party rank-and-file aren’t going to cooperate. In fact, they’re pulling stubbornly in the other direction, if we can judge by a Pew poll from December which found that the Republican Party is becoming even more creationist:

Two things to notice here: first, an absolute majority of Republicans now reject evolution; second, this wasn’t the case as recently as four or five years ago. Judging by a Gallup poll from June 2012 that reported similar results, it seems as though this shift must have happened within just a two- or three-year period – an incredibly short window to realign the ideology of a major political party.

It’s not the case that Americans in general are becoming more creationist. According to Pew, the percentage of Americans who say that human beings have evolved is about 60%, and that number hasn’t budged. Rather, what we’re seeing is an ideological purification. Moderate, pro-science Republicans are either quitting the party or being driven out, becoming independents or Democrats. This leaves behind a hard core of religious fundamentalists – especially white evangelicals, now more than ever the backbone of the GOP – who are aggressively, fervently anti-science, the kind of people who pay money to see Ken Ham’s Creation Museum and its Flintstones-esque dioramas that show Adam and Eve frolicking in the Garden of Eden with dinosaurs.

That’s why I don’t expect that $50 million to make much of a long-term difference. It doesn’t matter how much you spend if your audience isn’t willing to be persuaded, and increasingly, it seems that the face of the party is people like Robert Knight, a pundit who’s just thrilled by these survey results. Rather than seeing it as evidence of the widening chasm between the Republican base and the rest of the country, he cheers the GOP on and argues that they should be even more creationist to guarantee electoral success. If the logic here escapes you (“1. More Republicans Believe in Creationism; 2. ???; 3: Huge Conservative Victory!”), well, then you’re probably the kind of pedantic rationalist who insists on knowing how two of every species could fit on a single wooden boat.

Image: Sue the tyrannosaur, on display at the Field Museum in Chicago. Photo by the author.