A Lesson in the Premature Counting of Chickens

A Lesson in the Premature Counting of Chickens March 27, 2014 Adam Lee

Several months ago, I reported on an article by Dr. Karen Stollznow that laid out her experience of sexism within the skeptical community, alleging years of on-the-job sexual harassment by a colleague. Soon after her article was published, CFI’s Benjamin Radford was accused, though not by Stollznow, of being that colleague.

I’d heard rumblings that Radford was threatening to sue Stollznow for libel, but those were just rumors until a few days ago. The first I heard of this was over the weekend, when my blog got several comment submissions from misogynist bottom-feeders who gleefully announced that Stollznow had retracted her claims and confessed them to be lies, and demanded I take down my post as well. Here are those comments:

Think you might want to update this now, Adam? Maybe even apologize? 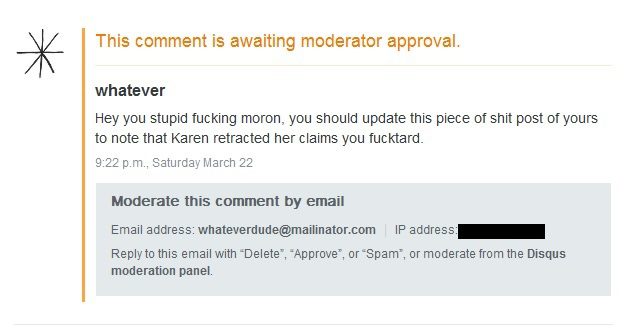 Hey you stupid fucking moron, you should update this piece of shit post of yours to note that Karen retracted her claims you fucktard. 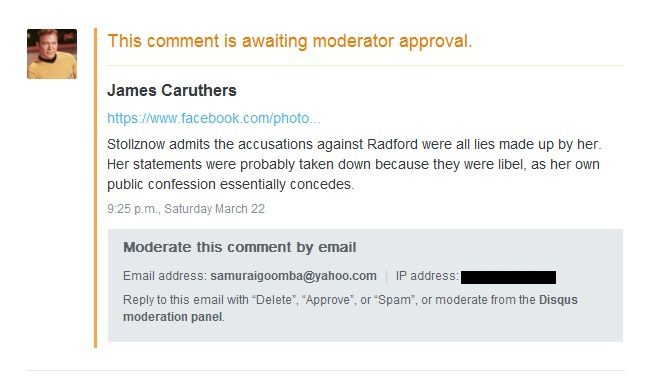 Stollznow admits the accusations against Radford were all lies made up by her. Her statements were probably taken down because they were libel, as her own public confession essentially concedes.

As proof of this, they linked to a document posted on Facebook, by Radford, which purported to be a full retraction. (That document has since been taken down, for reasons that will become obvious, but here’s a screen capture of it. See also this detailed timeline of public events by Lousy Canuck.)

The problem, as several people pointed out at the time, was that this document wasn’t signed or notarized – it was a text file, nothing more – and for several days Stollznow herself conspicuously failed to confirm its authenticity. Last night, she broke her silence on Twitter and flatly denied that she had written it or agreed to it:

A Twitter post by her husband stated that the document Radford posted was an altered version of something they had been negotiating:

I wrote a joint statement, they morphed it into an apology, said that I worked on it with them, and claimed that @karenstollznow agreed.

Now, it seems to me that if I were publishing highly damaging and reputation-harming (as the comments reposted in this article attest) documents in someone else’s name without their agreement, I might be the one in danger of a defamation suit. But of course, I’m not a lawyer.

It’s still possible that there will be some kind of negotiated settlement in this case. I’m told that the cost of mounting even a bare-minimum defense against a libel suit, however unjustified, can easily run to tens of thousands of dollars.

But as it stands, this document isn’t that settlement, and the misogynist skeptics leaped on it only because it confirmed what they wanted to hear. They’re disturbingly eager to blindly assume that any accusation of sexist or harassing behavior must be a lie, and to reflexively take the side of anyone so accused. A more genuinely skeptical attitude would have served them well in saving them from embarrassment. The lesson here is: Before you take a victory lap, you’d be well advised to make sure your shoelaces are tied, lest you trip and fall on your face.

IMPORTANT UPDATE: Karen Stollznow is going to fight, and she’s opened a legal defense fund to defray the costs. If, like me, you’re sick and tired of harassers trying to camouflage themselves among our community, please give and help her out! I for one intend to donate generously.

FURTHER UPDATE: The response from the secular community is astounding! In less than 12 hours, Karen Stollznow’s initial goal of $30,000 was met and exceeded. If this becomes a prolonged court battle, it’s possible her legal fees will exceed even this amount, so if you still want to donate and haven’t yet, please do. Send the harassers and their apologists the strongest possible message that we want nothing to do with them!

March 26, 2014
What Is #UpForDebate in the Secular Community?
Next Post

March 28, 2014 Atlas Shrugged: Vice-President of Exposition
Recent Comments
0 | Leave a Comment
Browse Our Archives
get the latest updates from
Daylight Atheism
and the Patheos
Nonreligious
Channel
POPULAR AT PATHEOS Nonreligious
1