History Repeats Itself Yet Again

Last week, Arizona’s governor Jan Brewer vetoed the revolting right-to-discriminate bill passed by her state’s legislature. Like the similar bill that collapsed in Kansas, this one moved rapidly at first but then stalled when it gained national attention. As Brewer dithered, both Mitt Romney and the state’s Republican senators John McCain and Jeff Flake urged her to veto it. Even three Republican legislators who voted for the bill publicly changed their minds about it.

It’s possible that that we’ve found the anti-gay bill too extreme even for Republicans – that the historical parallels were too obvious for them to deny – but I think it more likely that Brewer’s veto was a political calculation in response to the onslaught of bad publicity and threats to boycott the state. But even if this is true – especially if it’s true – it’s a sign that we’re approaching a tipping point in America. Despite the anger and vituperation of their base, Republican politicians now see anti-gay bigotry as a losing proposition. This finger-to-the-wind strategizing has no doubt been bolstered by an unbroken string of recent court victories in states as conservative as Kentucky, Texas, Virginia and Oklahoma.

But the news isn’t all good for human rights. In Uganda, President Yoweri Museveni has signed the brutal anti-gay bill that was backed by American evangelicals and has been a political football for years. (The final version doesn’t include the death penalty that was in earlier drafts, but it does mandate life sentences in some cases.) In response, several nations and the World Bank cut off aid to the impoverished country. But that’s not to say Museveni has lost all his friends:

Catholic bishops have united with the Protestant, Orthodox and Pentecostal Churches’ leaders, as well as the Muslims, to say the law will promote morality in the country. Days before Mr Museveni signed the bill, Archbishop Cyprian Kitizo of Kampala Archdiocese, together with other Christian leaders under the Interreligious Council of Uganda, said the law will help end recruitment, funding and promotion of homosexuality in the country.

This story is further evidence that as the mainstream becomes more tolerant, the religious leaders who promote bigotry are hardening their positions and retreating to the remaining places where they still hold sway. Sensing that their power is slipping, they’re becoming louder and shriller in a bid to reassert the moral authority they once enjoyed. But in the developed world, they’re having the opposite effect, according to an article by the Public Religion Research Institute which found that religious intolerance is driving more and more Americans, especially the Millennial generation, away from religion:

It’s remarkable how we’re witnessing history repeat itself with only slight changes. The same “religious liberty” arguments being used to defend anti-gay bigotry were once used to defend racist bigotry, as pointed out by an excellent article from Think Progress:

After the Supreme Court ordered public schools integrated in Brown v. Board of Education, many segregationists cited their own faith as justification for official racism. Ross Barnett won Mississippi’s governorship in a landslide in 1960 after claiming that “the good Lord was the original segregationist.” Senator Harry Byrd of Virginia relied on passages from Genesis, Leviticus and Matthew when he spoke out against the civil rights law banning employment discrimination and whites-only lunch counters on the Senate floor.

If past experience is any guide, once we’ve broken the back of homophobia just as the civil rights movement broke the back of racism, religious fundamentalists will try to redraw history and pretend they were on the right side all along. Fortunately, the historical record is even more ample this time around – and the banner of bigotry, which is still being waved high in places like Uganda, will serve as an embarrassing testament to religion’s usefulness in sanctifying the worst parts of human nature. 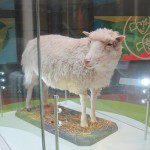 March 5, 2014 On the Morality of: De-Extinction
Recent Comments
0 | Leave a Comment
"they avowed their certainty that Jesus would bring her back to life:Despite this not being ..."
Bob Seidensticker The Strange Sad Story of Olive ..."
"...currently every single link in the "Trending at Patheos Nonreligious" is to a "I'm moving ..."
OverlappingMagisteria Announcing: OnlySky
"I've already signed up on Jonathan Pearce's site. Looking forward to the new digs."
ORAXX Announcing: OnlySky
"Interesting. Although if Andrew Hall is coming along, I hope the new site will make ..."
bificommander Announcing: OnlySky
Browse Our Archives
get the latest updates from
Daylight Atheism
and the Patheos
Nonreligious
Channel
POPULAR AT PATHEOS Nonreligious
1