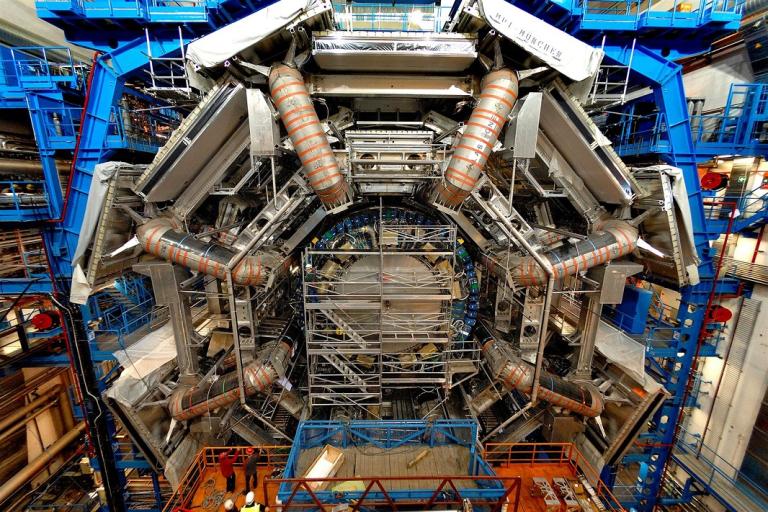 Last weekend I saw Particle Fever, a movie about the Large Hadron Collider and the scientists who built it in their quest to resolve one of the greatest outstanding mysteries in physics. It’s easily among the most enthralling science documentaries I’ve ever seen, so if you get the chance, see it!

The LHC was built to fill in the last missing piece of the Standard Model, the wildly successful theory that’s guided particle physicists for decades, but that fails to explain why some subatomic particles have mass. In 1964, British physicist Peter Higgs theorized the existence of an invisible field that fills space like molasses and exerts a drag on particles passing through it, which is what we perceive as mass. The Higgs boson is the smallest unit of this field, and finding it at last was the purpose of the LHC.

Built beneath CERN in Geneva, the LHC is a vast (27 kilometers!) ring lined with superconducting magnets that accelerate two beams of protons to 99.999…% of the speed of light, steering them to collide at four points around the ring where four gigantic detectors, ATLAS, CMS, LHCb and ALICE, record the results. With higher energies than any other particle accelerator on the planet, it can recreate conditions that prevailed just after the Big Bang, probing physics at scales we’ve never been able to attain before.

The LHC itself is a thing of beauty, the biggest and most complex machine ever built by human beings. (The ATLAS detector alone is a five-story behemoth of hand-soldered electronics.) Running it takes the combined effort of over 10,000 scientists from a hundred countries, including – as one interviewee points out – scientists from countries that are mortal enemies, like India and Pakistan, or Israel and Iran, but here collaborating peacefully in the cause of pure science.

The film focuses on a few main characters divided among two main camps, the theorists and the experimentalists. Among the former are the laid-back David Kaplan and the intense Nima Arkani-Hamed from the Institute for Advanced Study in Princeton (who cheerfully play ping-pong while debating the nature of the universe, in one of the best scenes), while the experimentalists are represented by Monica Dunford, an endearingly geeky American postdoc, and Fabiola Gianotti, the head of the team overseeing the ATLAS detector. (Among its many virtues, the film is attentive to the contributions of women in a male-dominated field; it even passes the Bechdel test.)

It also chronicles the stumbles along the way, like the crackpot lawsuits which sought to shut down the collider lest it produce a black hole that would swallow the Earth. More seriously, there was a disastrous setback just a few days after the LHC was first switched on: a tank of liquid helium ruptured and damaged one of its giant superconducting magnets, requiring months of arduous repairs.

Rare for a science documentary, the film injects a real, heart-in-your-throat suspense into these proceedings, especially near the end as the Higgs hunt approaches fruition. When the filmmakers interview elderly scientists who’ve spent decades developing the theories that could finally be tested at the LHC, it’s not hard to grasp what’s at stake.

Among other questions the collider was built to explore is why the universe’s physical constants, like the strength of gravity, have the values they do. One group of physicists favors a theory called supersymmetry, a mathematically elegant way of uniting the fundamental particles with heavier “superpartners” that have yet to be seen. Other physicists favor multiverse theories, in which our universe is part of a much vaster supercosmos that gives rise to baby universes like bubbles in foam, all of them varying randomly from each other. Under this theory, the physical constants we observe are just the values that happened to prevail in our region of space.

As it turns out, the mass of the Higgs boson can decide between these possibilities. A lighter Higgs, around 115 gigaelectronvolts, would favor supersymmetric theories; a heavier Higgs, around 140 GeV, is associated with theories that include a multiverse. I knew the Higgs had been found but didn’t remember its mass, so I was genuinely on the edge of my seat as we see the giant press conference where the LHC’s findings were announced. I won’t give any spoilers; but when we see Peter Higgs sitting in the audience, listening to proof of the idea he proposed 50 years ago and removing his glasses to wipe away a tear, it was impossible not to get choked up.

Despite its esoteric subject, Particle Fever is clear and accessible throughout. The graphics and animations are wonderful: a physicist walks across a field, with equations swirling around his head, and the world falls away around him into the vast void of space. Another brings her hands sharply together to show how the collider works, and we see two sketched blueprints of automobiles colliding, sending gears and wheels spraying outward. It conveys, probably better than any other documentary I’ve seen, the thrill of discovery and the elegance and beauty of physical law that inspires people to dedicate their lives to science. And it gives me hope that the human species is still capable of a feat like this, that so many people and nations could come together to build a vast experiment like the LHC, purely for the sake of knowledge.

Image: The ATLAS detector of the LHC, via CERN