Atlas Shrugged: All There in the Manual

Atlas Shrugged: All There in the Manual April 4, 2014 Adam Lee

These past few weeks, we’ve been discussing why the first Atlas Shrugged movie flopped so badly at the box office. I’ve argued that it failed to appeal to hardcore Objectivists, at least in part, because its script disastrously depicts its capitalist heroes and socialist villains as normal human beings, rather than the incorruptible superhumans and leering vampires Rand envisioned.

The other half of the question is why it failed to draw a wider general audience. Surely there are people out there who aren’t familiar with Ayn Rand, who didn’t come for the rah-rah capitalism speeches and take-that-you-dirty-hippies philosophizing, who would just have appreciated the movie as an entertaining story without realizing it’s supposed to be a parable of ultimate good versus evil. What kept them away?

My answer to this is that, if you want to attract the general public, you have to tell a good story, one with well-drawn and believable characters and a plot that follows naturally from their choices. This movie… doesn’t do that. Its creators were so intent on cramming in so much exposition about interstate shipping regulations and the personal biographies of disappearing businessmen that most of the important characterization beats are lost.

The clearest example is the movie’s treatment of Hank Rearden the steel magnate. As we learn from the book, Hank despises his wife and family, speaks to them only through clenched teeth, and has to be guilt-tripped into attending a party for his own wedding anniversary. Rand asserts that he’s fully justified in this, because he’s one of the productive elite and his family members are all worthless parasites who don’t deserve life.

But none of this makes it into the movie. For instance, the film version of the anniversary party looks like a perfectly enjoyable, fancy black-tie ball, with lots of expensive food, booze and music, and Hank just looks like an inexplicably standoffish jerk (which he is, but we’re not supposed to think that):

Even more unintentionally hilarious is this sex scene between Hank and his wife. The novel asserts that it’s Lillian’s fault that his love life at home is boring and passionless, but you’d never take that away from the movie. Just watch and cringe, and be incredulous that this man is supposed to be the one we sympathize with:

If Lillian doesn’t like having sex with him, no wonder! He’s terrible at it. He cares absolutely nothing for her pleasure or satisfaction. (Can we get Dan Savage to give this man some advice?) This is also true of book-Hank, for that matter, but the movie accomplishes the amazing feat of painting him as even less likable.

Without the novel’s copious omniscient narration to explain why its protagonists are in the right despite all appearances, a naive viewer will wonder why the movie is focusing on these rude, unlikeable people as protagonists. Plenty of successful TV shows and movies are about antiheroes – but they’re good antiheroes with complex characterizations that keep you guessing or a backstory that conspires to make you feel sympathy for them. These characters don’t have either of those things.

There are also a few places where the filmmakers did something even more poorly-advised, namely trying to improve on the book. This is clearest in the scene where Dagny and Hank find the magic motor in the ruins of Starnesville. No doubt deciding that “atmospheric static electricity” sounded a little too archaic, the filmmakers tried to come up with a new explanation of how it works, and ended up with a word salad that sounds like Star Trek technobabble, only without the plausibility:

Also, it reverses the polarity of the neutron flow.

By producing an imperfect adaptation of the book, the filmmakers turned off the most devoted Rand followers. By writing a script that makes no sense if you haven’t read the book, they turned off everyone else. This is the same problem that confronts any film adaptation of a popular novel, but it applies with a vengeance in this case, where the finished product was bound to be judged for both its entertainment value and its adherence to the ideological party line. In trying to satisfy both groups, inevitably, they ended up pleasing neither. 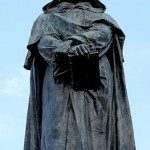 April 4, 2014 Friday Night Music: Fitz & the Tantrums
Recent Comments
0 | Leave a Comment
Browse Our Archives
get the latest from
Nonreligious
Sign up for our newsletter
POPULAR AT PATHEOS Nonreligious
1