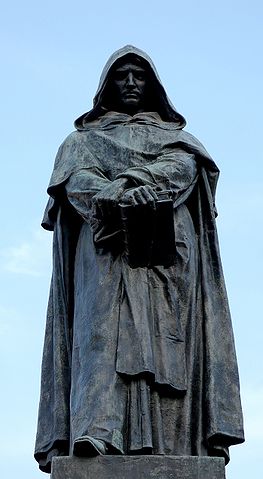 I’m greatly enjoying the new Cosmos, but there are those who are none too pleased by it. Some of the critics are too laughable to take seriously, like the creationists who’re whining about not getting equal time. Then there are the ones who represent an allegedly more sophisticated theology, like this post by Andrew Sullivan, in which he straightfacedly asserts that Carl Sagan and Neil deGrasse Tyson’s popularization efforts are giving science a bad name. Why? His complaint stems largely from the first episode, which retells the infamous episode of Giordano Bruno. As is his style, Sullivan writes little himself, drawing mainly from other people’s quotations:

The segment previewed above is on the 16th century priest and philosopher Giordano Bruno, which includes deGrasse Tyson intoning that the Roman Catholic Church sought to “investigate and torment anyone who voiced views that differed from theirs”. Really?

Yes, really. That’s what that thing called the Inquisition was all about.

It wasn’t just Bruno who was targeted, of course. Although he and Galileo were the most historically notable subjects of church persecution, there are whole lists of others. As Andrew Sullivan no doubt knows quite well, the Catholic church had an entire Index of Forbidden Books, containing a wide variety of works by some of the era’s great scientists, philosophers and poets. The Vatican also sought to require all books to get a certification from a church censor that they contained nothing unorthodox before they were allowed to be printed.

[quote from David Sessions]
Bruno’s conflict with the Catholic Church was theological, not scientific, even if it did involve his wild — and occasionally correct — guesses about the universe.

It’s true that Bruno’s conflict with the church was fundamentally theological, not scientific, and that his belief in an infinity of populated worlds stemmed from his mystical, pantheist views, not evidence. (The first episode of Cosmos made this perfectly clear.) So what? Are we supposed to conclude that burning someone at the stake for their religious views is more acceptable than burning them at the stake for their scientific theories?

The obvious rejoinder is that when other people, such as Galileo, made claims that were rooted in scientific evidence and not heretical metaphysics, the church persecuted them just as viciously. In all likelihood, the only reason Galileo escaped Bruno’s fate is that he recanted under pressure and Bruno wouldn’t.

[quote from David Sessions]
The church didn’t even have a position on whether the Earth orbited the sun, and didn’t bring it up at Bruno’s trial.

The list of charges against Bruno included his belief in the plurality of worlds, according to the historian Luigi Firpo. As far as the church “not having a position” on the heliocentric solar system, its persecution of Galileo, as well as its placing Copernicus’ De Revolutionibus Orbium Coelestium and Kepler’s Epitome astronomiae Copernicianae on the forbidden-books list argues rather strongly for the opposite.

While the early-modern religious persecution certainly can’t be denied, Bruno was killed because he flamboyantly denied basic tenets of the Catholic faith, not because religious authorities were out to suppress all “freedom of thought.”

I’ve read that sentence at least a dozen times trying to figure out what its author thought the distinction between these two things is. I still don’t see it. If a church tortures and kills people who deny the tenets of its faith, I’m pretty sure that counts as religious authorities being out to suppress freedom of thought.

Cosmos‘ point in telling this story isn’t that Bruno was a martyr to science. The point is that the church sought to control people’s imaginations, to dictate which thoughts were mandatory and which forbidden, and that this violent repression stifled all kinds of contrary and creative ideas, including scientific research that ran counter to orthodoxy. I agree that the show turns history into parables, which is the only realistic way of presenting it in a 45-minute television show, and that some details are inevitably lost or glossed over in the process. But no matter. As with the Bruno story, the parts that most enrage religious apologists aren’t the things it gets wrong, but the things it gets right.

[quote from Walter Percy]
…it is no coincidence that science sprang, not from Ionian metaphysics, not from the Brahmin-Buddhist-Taoist East, not from the Egyptian-Mayan astrological South, but from the heart of the Christian West, that although Galileo fell out with the Church, he would hardly have taken so much trouble studying Jupiter and dropping objects from towers if the reality and value and order of things had not first been conferred by belief in the Incarnation.

And here we come to the heart of the matter. Cosmos isn’t explicitly atheist, but it also doesn’t bend over backwards to flatter religion. When the church persecuted freethinkers, when religion was a barrier to inquiry, when superstition held back humanity’s development, it says so. And that’s what’s gotten Sullivan so incensed.

The idea that science could only have arisen in a European, Christian context is as ludicrous as it is offensive. Every human culture of any significant complexity has shown glimmerings of advanced knowledge. And that’s just as we should expect, since we all live in the same world. All the truths we possess are out there, waiting to be discovered by anyone with a quick and curious mind.

The Muslims, despite their lack of “belief in the Incarnation”, achieved great things in science and mathematics while Europe was mired in the Dark Ages. Centuries before the spread of Christianity, the pagan Greeks studied nature and constructed clockwork devices of astonishing sophistication. Ancient Indian societies laid the foundations of modern mathematics and dreamed of an immense and inconceivably ancient cosmos. China invented the compass, gunpowder, the abacus and the printing press a thousand years before the West. American civilizations like the Maya were skilled astronomers. And we’re only just beginning to unearth the lost cosmopolitan empires of Africa.

The only difference is that in all these other societies, the sparks of inquiry died out, either internally from the persecution of orthodoxy, or externally as civilizations collapsed from war or upheaval. Europe happened to be the first place where those sparks caught hold and flared into a lasting flame (thanks in part to the fortuitous rediscovery of Greek and Roman philosophy). If it had happened in another culture, no doubt it would have been through a different path of contingency. But I’m certainly not going to claim, as Sullivan does, that Europe was the only place where it could have happened. That arrogant, self-congratulatory mythology is ridiculous in light of the manifest fact that now, hundreds of years later, the church’s apologists are seeking to claim credit for an outcome that, at the time, the church fought with all its power to prevent.