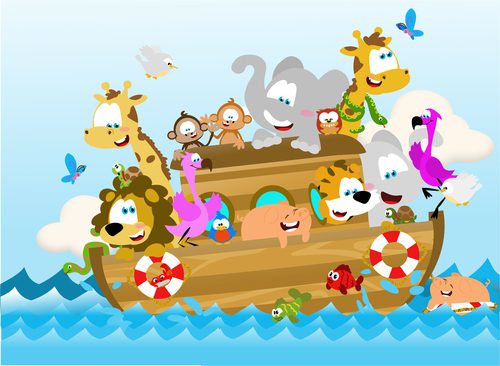 In 2009, I wrote “The Twisted Moral of Passover“, about how this major Jewish holiday is really a celebration of genocide: the mass killing of the Egyptian children that preceded the Israelites’ deliverance from slavery. (The very name of the holiday refers to how the Israelite slaves supposedly marked their doors with blood so that the divine executioner would see it and pass over their houses.)

Even if there isn’t any archaeological evidence for this event, or for the Egyptian captivity in general (which there isn’t), it doesn’t take away the disturbing message. The slaughter of the innocent is being treated as something to commemorate, an event for which Jewish people should feel pride and gratitude. As I said at the time:

Let us not forget, ancient Egypt was not a democracy! Regardless of their feelings on the matter, the Egyptian people had no say in whether the Israelites were set free. The only person who had the power to make that decision was the pharaoh. What purpose did it serve for God to torment and massacre his subjects? Truth, why not just kill the pharaoh and ensure that the next person to come to the throne was more sympathetic to the Israelites’ plight?

Well, this week it’s Passover again, and I assume that’s how a Jewish believer found my post. He left an irritated comment accusing me of not understanding what the holiday is about:

We Jews must NOT gloat over the downfall of our enemy, even if such a downfall was eminently deserved. When God metes out justice to the wicked, we should find it unsettling. God’s power has been unleashed in this world; am I so deserving that it will not be directed at me?

The commentator Rabbeinu Yonah adds that there is a certain sense of elation we may feel. God’s honor has been restored. Wickedness does not last forever. God ultimately sees to it that His enemies are punished. If He does so in this world, just a small amount of His glory has been revealed to mankind. And for that, we may rejoice.

We may NOT, however, rejoice over the suffering itself our enemy endures. It may be necessary and it may be 100% right, but it is NOT a source of joy.

But the suffering of the Egyptians, as I’ve already discussed, was neither necessary nor right. It was a collective punishment, born from the ancient mindset that people bear responsibility for the deeds of others in their family, tribe or nation, and can rightfully be punished for things they didn’t do and couldn’t control. Were the firstborn Egyptian infants and children really “God’s enemies”? Does it “reveal God’s glory” for them to be slaughtered? This believer’s reply steps carefully around these questions.

The Talmud states that when the Egyptians were drowning in the sea, the angels wanted to sing their daily song of praise to God, and God quieted them: “The creations of My hands are drowning in the sea, and you are singing song?!” (Megillah 10b). One of the most wicked and immoral nations history has produced was at last experiencing its morally inevitable fate, yet God Himself experienced no pleasure in the process.

Yet at the same time the angels were silenced, Moses and Miriam led the Jewish nation in the Song of the Sea.

Were we so much better? If the angels could not sing, how could we?

This is an excellent example of how religion bends, unwillingly, to moral progress. Most religious texts were written in ancient eras when immoral practices like slavery, genocide and absolute monarchy were the norm. Modern apologists recognize the evil parts of their sacred text, but their faith prevents them from either outright rejecting or altering it. Their solution, beloved of comic book authors and soap opera writers everywhere, is the retcon: introducing new facts and assumptions that weren’t originally in evidence and that retroactively change the meaning of what we read.

In the original text of the Bible, the waters of the sea crash in and drown the Egyptians, and the Israelites witness this and sing a hymn of joy and gratitude (which, by the way, is still part of daily Jewish prayers). The clear message is that God did something good by annihilating the Egyptian army. The modern retcon is that the Israelites were wrong to sing their happiness, and that God himself remained silent (presumably rather than saying something like, “Boy, what a great thing that was that I just did!”) because he didn’t approve of his own action.

Here’s a question: If God didn’t want to kill the Egyptians, why didn’t he just, you know, not kill them? Why not just put a forcefield between them and the Israelites? Why not just close the sea before they entered it? The “regrettable necessity” defense doesn’t hold any water (much less a sea’s worth of water) when dealing with an omnipotent being.

I’ve previously dubbed this trend “the march of progress”: the way that moral progress overtakes religion, in spite of the furious rearguard defenses by fundamentalists, and the way that later believers then claim credit for that moral advance as if it had been their idea all along. It’s happened many times, and this is another example of it.

It’s undoubtedly a good thing that decent people now recognize the evil of genocide, Jewish and gentile alike. But you’d never have gotten that idea if you were going solely by the Bible, which depicts God as committing so many mass killings he practically runs out of ideas for how to do them. Indeed, there are still people who take these bloody passages at face value. All the clever reinterpretations in the world can’t paper over the true, disturbing message of a text like this, which will always bleed through in the end.

Image: Planetary genocide turned into a fun cartoon for children, via Shutterstock