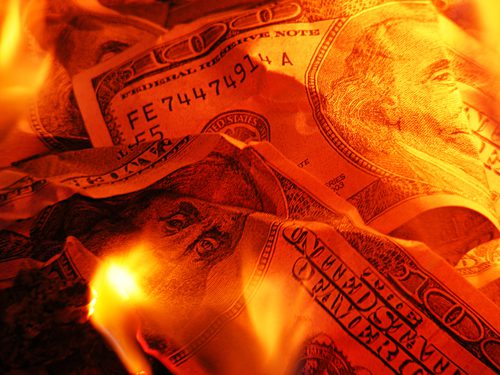 After Francisco’s big speech comes to an end, a suitably impressed Hank Rearden comes over to talk to him:

“Before I met you, I used to wonder how you could waste a fortune such as yours. Now it’s worse, because I can’t despise you as I did, as I’d like to, yet the question is much more terrible: How can you waste a mind such as yours?”

Francisco parries that he doesn’t think he is wasting it. Rearden asks Francisco why he doesn’t practice what he preaches, considering that he’s getting rich by means of unjust laws that have choked off his competition:

“Did you think that it was I who wheedled those directives out of the robber-planners?”

…”I’d hate to admit how much I want to believe you – but there’s no way for you to prove it now.”

“No? I’ll prove it to you within the next fifteen minutes.”

Francisco goes on to explain that most of the looters have invested their ill-gotten gains in d’Anconia Copper, “an old, invulnerable company”, which they presumed to be a safe investment. But, he says gleefully, it’s not as safe as they think:

Francisco laughed suddenly. “…But accidents do happen in the world – you know what they say, man is only a helpless plaything at the mercy of nature’s disasters. For instance, there was a fire at the d’Anconia ore docks in Valparaiso tomorrow morning, a fire that razed them to the ground along with half of the port structures. What time is it, Mr. Rearden? Oh, did I mix my tenses?”

Francisco says that, when the disaster hits, his stockholders will find many other things wrong with the company: exhausted mines that were still being worked for no good reason, books that had been altered to hide losses. And as the crowning blow, he says, there will be a rock slide that will bury the richest deposits of copper “under tons of mountain where a Sebastian d’Anconia would not be able to reclaim them in less than three years, and a People’s State will never reclaim them at all.” In the resulting stock crash, he chortles, most of the looters’ wealth will be wiped out, and no one will ever prove there was anything more than ordinary incompetence at work.

Then, raising his voice, Francisco said suddenly, in the gay, loose, piercing tone of a man of complete irresponsibility, “You won’t grant me that loan, Mr. Rearden? It puts me on a terrible spot. I must get the money – I must raise it tonight – I must raise it before the Stock Exchange opens in the morning, because otherwise—”

He did not have to continue, because the little man with the mustache was clutching at his arm.

…”Is there something wrong, Señor d’Anconia? I mean, on… on the Stock Exchange?”

Francisco jerked his finger to his lips, with a frightened glance.

The man was shaking. “Something’s… wrong?”

“You don’t happen to own any d’Anconia Copper stock, do you?”

The man nodded, unable to speak. “Oh my, that’s too bad! Well, listen, I’ll tell you, if you give me your word of honor that you won’t repeat it to anyone. You don’t want to start a panic.”

“Word of honor…” gasped the man.

“What you’d better do is run to your stockbroker and sell as fast as you can – because things haven’t been going too well for d’Anconia Copper, I’m trying to raise some money, but if I don’t succeed, you’ll be lucky if you’ll have ten cents on your dollar tomorrow morning – oh my! I forgot that you can’t reach your stockbroker before tomorrow morning – well, it’s too bad, but—”

The man was running across the room, pushing people out of his way, like a torpedo shot into the crowd.

As Francisco intended, the bad news gets out almost immediately, and Jim Taggart’s wedding party dissolves into a panic. People go running for the exits, pushing and shoving and climbing over each other in an attempt to be the first one to sell their stock.

Taggart ran toward the main exit… Cherryl, her wedding veil coiling like a crystal cloud upon the air, as she ran after him, caught Taggart at the door. “Jim, what’s the matter?” He pushed her aside and she fell against the stomach of Paul Larkin, as Taggart rushed out.

After a falling-out like that, you’d think the honeymoon would be over, but this inexplicably seems to have no effect on their relationship. As we find out in later chapters, Cherryl is still devoted to Jim and thinks he’s a brave hero. Perhaps this stems from Rand’s belief that good capitalist men are permitted to hit, shove and otherwise abuse women. If Cherryl holds to this view, as all of Rand’s other female characters do, then presumably Jim treating her this way would be a sign of his virtue.

It’s worth noting that what Francisco is doing constitutes outright fraud, yet Rand never treats it as anything other than wholly justified. Basically, he’s running a larger version of a pump-and-dump stock scam, where swindlers buy up a cheap stock, artificially inflate its price through deception, then sell their holdings, take the money and run before their cheat is discovered. The only difference is that Francisco is seeking to wipe out others’ wealth, not to personally profit; but if you rob a house, it doesn’t get you off the hook for burglary if you burn the stolen goods rather than fence them.

This is further evidence of Rand’s highly selective, “everything is allowable if the good guys do it” moral code. We’ve already seen that she viewed Francisco as justified in building shoddy, death-trap homes on the grounds that only bad people would be living there when they came crashing down. Now we’ve learned that, as far she’s concerned, it’s also OK for him to intentionally defraud his own investors, sabotaging his company and lying about it, if he doesn’t want to make money for them.

It’s hard to imagine that even someone as devoted to laissez-faire capitalism as Ayn Rand could be this committed to the principle of caveat emptor. Even in the ultimate Objectivist utopia, shouldn’t fraud still be a crime? Or are we to believe that the businesses you invest in are allowed to secretly try to destroy you if, in their sole judgment, you don’t live up to the moral standard they expect from their customers?