On the Morality of: Self-Plagiarism

In my last link roundup, I mentioned a damning story that leveled charges of rampant plagiarism against Chris Hedges, a left-wing writer who really loathes New Atheism. According to the story, which was published in the New Republic after other progressive outlets declined to run it, Hedges has lifted ideas, sentences and whole passages without attribution from many other people’s work, from fellow reporters at Harper’s to Naomi Klein, Neil Postman and Ernest Hemingway (!!).

Even though I’d probably agree with Hedges on most issues, I admit to feeling some schadenfreude about this. His ridiculously vitriolic and sloppily self-contradictory attacks on New Atheism had already convinced me that he wasn’t a thinker worth taking seriously. Then, the other day, I saw a new Gawker article that additionally charges Hedges with being a “habitual self-plagiarist”, reusing sentences, passages and larger chunks of text in his published work throughout the years.

I’m loath to sound like I’m defending Hedges, so let me make it clear that I’m not doing that. Plagiarism per se is a serious moral transgression, and the charges that Hedges cribbed from other writers seems well-substantiated to me, based on the evidence presented. But I have my doubts about whether this new charge is properly placed in the same category.

I think the concept of “self-plagiarism” is a contradiction in terms. Plagiarism is immoral because it’s a form of theft, appropriating other people’s work for your own benefit while denying them the credit they deserve. But, by definition, you can’t steal from yourself.

If I do the work of digging up a juicy fact, inventing a clever bon mot or assembling a well-honed argument, isn’t it legitimate to reuse it in different contexts? Most professional writers publish in more than one outlet, and it seems egotistical to assume that once you’ve said something once, everyone who needs to hear it will have heard it. I don’t think it’s wrong to repeat yourself if there’s a point you want to strongly emphasize or to disseminate as widely as possible. (Is a professional speaker engaging in self-plagiarism if they give the same speech multiple times?)

Likewise, if you write a short essay, it doesn’t seem wrong to me to expand on it or incorporate it into a longer piece, marshaling additional evidence to support your thesis or weaving it into a broader argument. (Full disclosure: I did just this in my book Daylight Atheism; several of the chapters are expanded versions of some of my favorite posts and essays.)

Now, obviously, this has limits. If you sign an agreement with a magazine or a web journal that calls for original work, it would of course be wrong to submit the same piece to two different outlets and expect to be paid for it twice. If you grant exclusive publication rights for an original piece, you also shouldn’t republish large chunks of it elsewhere. But I don’t think it’s wrong to reuse words, phrases or ideas from one outlet to the next. Granted, there’s a Ship of Theseus problem here – how much material can be recycled or repurposed from past work before the piece as a whole is no longer “original”? – which I don’t propose a definitive answer to.

The other criticism one could make, which I think has more validity, is that habitually repeating yourself makes your writing unoriginal and uninteresting – and if you repeat the same arguments in response to every critic, people will be justified in suspecting that no critical thinking or fair consideration went into them. But I don’t believe it’s justified to equate this to plagiarism, a much more serious ethical lapse. 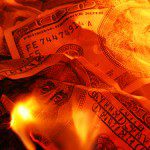 June 20, 2014 Atlas Shrugged: Pump and Dump
Recent Comments
0 | Leave a Comment
Browse Our Archives
get the latest from
Daylight Atheism
Sign up for our newsletter
POPULAR AT PATHEOS Nonreligious
1