Let’s Not Be Uncivil Here

Can’t we have a calm, reasoned, civil discussion about whether I should stop punching you or not?

I mean, sure, I may currently be sitting on your chest aiming one punishing blow after another into your head, neck and shoulders. I’m willing to grant that reasonable people may differ about the ethics of this behavior. But the important thing is that we work it out politely. Why are you being so hostile? I’m inviting you to join me in a serious, sustained dialogue about the continuance of said punching, the better to reach a democratic and philosophical consensus. If you reject that offer, clearly it’s because you’re an ideologue who rejects the very concept of truth.

While this may resonate with some other headlines you’ve seen lately, I was contemplating it specifically in reference to this article by Catholic philosophy professor R.J. Snell. Snell is quite upset with Josh Barro, a gay conservative who supports same-sex marriage, and who said that anti-LGBT attitudes should be “stamp[ed] out”. To illustrate what he thinks of this idea, Snell’s article includes the following no-kidding graphic: 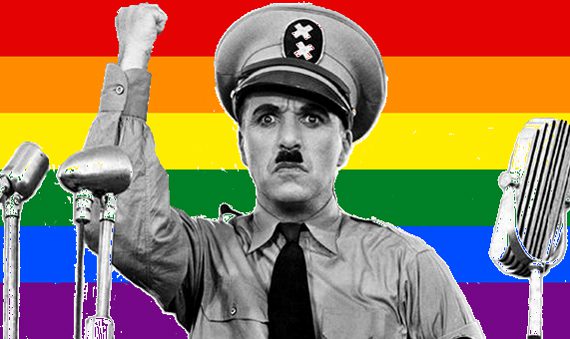 Because calling for an end to prejudice and discrimination, you see, makes you just like Hitler (who was famous for his advocacy of gay rights). That’s pretty much the high point of Snell’s article, but there are a few others:

At one point, Barro claims that [Ryan T.] Anderson [anti-gay author of What is Marriage?]’s views are simply unacceptable, the sort, apparently, needing to be ruthlessly stamped out, asking “why would you expect me to be civil toward you? You devote your life to promoting anti-gay public policies.” To this Anderson replies, quite civilly, “I think even in the midst of disagreement we should treat all people with respect. Apparently you don’t.”

See, the important thing is that Ryan T. Anderson is respectfully claiming that LGBT people should be denied adoption rights, inheritance rights, hospital visitation rights, the right to confer citizenship on your partner, and many more. Why do people have to get so mad about that? Why can’t they engage in a peaceful and civil debate with someone who wants to treat them as second-class citizens?

The fallacy of this is the same as my punching example: you can’t promote policies that actively harm other people and expect them to meet you in a spirit of dispassionate reason. Civility is a luxury that’s affordable by those who can debate the abstract merits of an idea in the knowledge that they won’t be affected either way. The powerful have always demanded that the powerless be respectful of their oppressors, and while LGBT people are no longer so powerless as they once were, anti-gay bigotry is still a very real and dangerous force.

One gets the sense that Barro interprets every attempt to make an argument against him as proof that the other side is benighted and wicked, as if reasonability renders a position illegitimate. Worse: that to offer reasons in favor of such an obviously oppressive position renders the person illegitimate, not just the position.

…According to Voegelin, such breakdowns of reason are relatively recent phenomena, the product of ideological thinking which emerged after roughly 1500 AD.

Yes! You see, “ideology” only emerged around 1500 AD. Before that, all people in the Western world reached truth through dispassionate philosophical persuasion. There certainly wasn’t, for example, some kind of powerful inquisitorial body which dictated that all people believe certain things under threat of torture. The medieval world’s tolerance for open debate and free inquiry is a well-known fact.

The other interesting thing is where Snell chooses to draw the line. What happened after 1500 AD that a Catholic philosopher would regard as the beginning of our forsaking the search for truth and descending into a dark age of ideology? Hmm, I wonder…

No wonder, then, that ideologues were behind so much of the great moral horrors of political violence of the twentieth century, for they used a boot rather than a syllogism to convince.

You heard that right: Christianity conquered the Western world through syllogisms. Granted, they may have included premises such as “All men are mortal” and “Mortal men who don’t convert to our brand of Christianity are going to be set on fire by this torch I’m holding right here,” but they were still syllogisms! In the ancient world, you see, they took deductive logic seriously.

The irony is that the rational debate Snell claims to want has already happened. The advocates of LGBT rights are winning – not by force, but by recalling past civil-rights movements and pointing out relevant similarities between anti-gay bigotry and other bigotries that are no longer publicly accepted. These arguments have repeatedly carried the day both in the courts and on the field of public opinion. It’s only now, when they’re losing, that the defenders of prejudice want to claim the debate was rigged against them all along.

August 18, 2014
New on the Guardian: Real Religious Persecution
Next Post 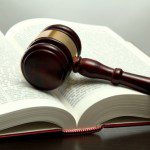 August 22, 2014 Atlas Shrugged: Pound the Table
Recent Comments
27 Comments | Leave a Comment
Browse Our Archives
get the latest from
Nonreligious
Sign up for our newsletter
POPULAR AT PATHEOS Nonreligious
1