The Fallout in Ferguson 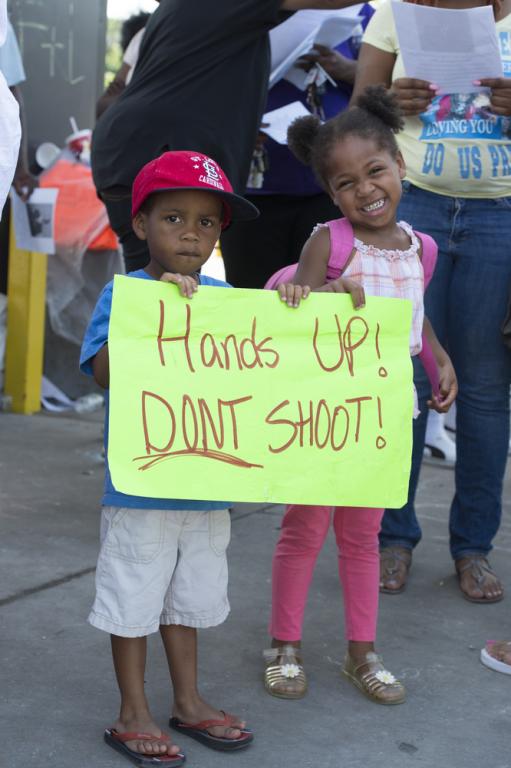 I’ve been gripped by the stories and images coming out of Ferguson, Missouri since last week. This suburb of St. Louis has been wracked with unrest since Michael Brown, an 18-year-old African-American teenager, was shot to death on a city street by a police officer – while he was standing with his hands raised in surrender, according to three eyewitnesses. The killing has stirred up the community to righteous fury, and the police have harshly cracked down on the ensuing protests.

In many ways, Ferguson is like a water droplet reflecting the world: a microcosm of American society and its unhealed racial wounds. What happened here could have happened almost anywhere.

The ebb and flow of American migration isn’t random. It’s strongly influenced by a desire to maintain de facto racial segregation, even decades after Jim Crow. Ferguson tells this tale in miniature: it was once majority-white (75% in 1990), part of a decades-long trend of whites moving out to the suburbs to get away from urban areas where black people lived in large numbers. But within the last twenty years, this trend has reversed, and Ferguson is now two-thirds black. Yet its police force and political leadership are overwhelmingly white, a legacy of its former demography. By many reports, only 3 of its 53 officers are black.

This chasm between the police and the people inevitably results in racially biased law enforcement. Statistics show, in Ferguson as in many other places, that black people are more likely to be stopped, searched, arrested and imprisoned, even though they commit crimes at rates no higher than other ethnicities. Racial prejudice means that black people tend to be perceived as more threatening and more prone to criminality, resulting in police officers who aggressively target them for street stops and other harassment, and are quick to reach for their guns at the slightest sign of resistance. (By contrast, white men who flout the law and point weapons at federal officers are treated with respect and deference.)

All these problems are further exacerbated by the militarization of the police, fueled by a bloated defense budget and a Pentagon that hands out military-surplus equipment like candy (the so-called 1033 program). This has resulted in police departments in small towns across the country stocked with armored vehicles, assault rifles and other tactical gear that’s grossly disproportionate to any remotely plausible threat. Whether it’s justified by the largely imaginary specter of terrorism, or the tough-on-crime, war-on-drugs mindset (itself concocted as an excuse for enforcing a racial caste system), the result is the same: when they’re armed to the teeth with military gear, it fuels the mindset of the police as an occupying force and encourages them to view the public as the enemy.

The warrior-cop mentality was on vivid display in Ferguson, where peaceful protest was met with an astonishingly brutal response. First we saw police pointing heavy weapons at marchers and journalists, in a blunt attempt at intimidation. When the police made their move, it looked like an invading army assaulting enemy lines: flooding the streets with tear gas and concussion grenades, shooting demonstrators with a fusillade of rubber and wooden bullets, and arresting journalists for no reason. The ugly images were reminiscent of the Edmund Pettus Bridge, like a scene out of a different era of American history brought to life.

This heavy-handedness looks even worse in light of their utter lack of concern for public perception or accountability. For days, the Ferguson police chief refused to release the name of the officer who shot Brown, claiming it was a matter of his safety (as if the heavily armed and militarized police we’ve seen couldn’t protect one of their own). Though the officer was finally identified – after intense public pressure – as Darren Wilson, they still haven’t released other basic information, like the text of the incident report or how many shots were fired.

What they have released are video stills of a man, whom they say was Brown, allegedly shoplifting from a convenience store earlier that day. Numerous people have questioned what these stills represent or whether the person depicted is Brown, but even if they’re what the police say they are, the penalty for shoplifting isn’t summary execution by a police officer’s gun. And the chief has admitted that the officer who shot Brown had no reason to suspect that he was involved in any crime, making the release of the video nothing but a blatant attempt to blacken his character. It’s the “anything we think you did retroactively justifies your murder” response. This is a police force so arrogantly certain they’re unaccountable that, on another occasion, they wrongly arrested an innocent man, beat him badly, and then charged him with destruction of property for bleeding on their uniforms.

But the root of the problem doesn’t lie with the Ferguson police, or at least not solely. From Michael Brown to Eric Garner to Trayvon Martin to John Crawford – and many more names could be added to that sad roll call – the ultimate problem is that we live in a society that treats people as dangerous and disposable solely because of the color of their skin. That kind of bigotry isn’t a dead letter; it’s alive and well and causing harm today. What’s happening in Ferguson isn’t an atheist issue or a religious issue, but a human issue that should concern all of us who care about justice in this world.

The Front Lines of Ferguson, by Rembert Browne

Is this how a dystopia starts?, by Carl Franzen

August 18, 2014 New on the Guardian: Real Religious Persecution
Recent Comments
65 Comments | Leave a Comment
"More or less Marvin Harris's explanation in Cows, Pigs, War, Witches."
TBP100 The Fountainhead: Wool and Linen
"Thank you very much! It's an honor to be mentioned in the same sentence as ..."
Adam Lee Commonwealth, III.XVII: Project Chicxulub
"The end of an era. Well, here's hoping for a succesfull new site."
bificommander There’s a Change Coming…
"Yes, it should! I need to correct that."
Adam Lee Commonwealth, III.XVII: Project Chicxulub
Browse Our Archives
get the latest from
Nonreligious
Sign up for our newsletter
POPULAR AT PATHEOS Nonreligious
1