(Editor’s Note: This review was solicited and is written in accordance with this site’s policy for such reviews.)

Summary: A dense philosophical-historical synthesis that rewards the diligent reader by opening up a new window on the beliefs of America’s founders.

Matthew Stewart’s book Nature’s God: The Heretical Origins of the American Republic, like Susan Jacoby’s Freethinkers or Jennifer Michael Hecht’s Doubt: A History, plumbs the freethinking ideals that played an outsize role in the founding of the United States. But while those books cast a broader sweep, this one zooms in on a very specific question: what philosophical principles were our founders guided by, and where did they get those principles from? (If you’re not familiar with Matthew Stewart, you may recognize his wife: Katherine Stewart, author of The Good News Club. Yes, they’re a family of writers! In the interests of full disclosure, I’m a friend of Katherine’s and she invited me to review the book.)

Stewart’s thesis is that America owes its existence and its national character to the ideals of deism, the so-called “natural religion” that counted many of the founders as adherents. Most atheists and secularists have heard of deism before, but you may have conceived of it as “basically like Christianity, except God doesn’t answer prayers”. I admit, that’s how I thought of it before I started this book.

But Stewart makes a compelling case that deism is no shabby knockoff of Christianity. It’s an independent and proud philosophical tradition in its own right, one that springs from a distinct stream of thought dating back to Epicurus, Lucretius and the ancient pagan atomists.

Atomist philosophy was lost after the fall of Rome, but rediscovered by the Renaissance book-hunters who birthed the Enlightenment (the story told in The Swerve, but Stewart also recaps it well). He makes a persuasive case that many of Europe’s most important thinkers – John Locke, Thomas Hobbes, Benedict Spinoza, Alexander Pope, Giordano Bruno and Galileo, among others – were influenced in one way or another by Epicureanism. Some of them, the most avowedly radical, were open about this; others took care to cloak their true sympathies in language that superficially resembled contemporary pieties, lest they be suspected of heresy. But all of them, he argues, furnished ideas that greatly influenced America’s founders and became the philosophical foundation for the Declaration of Independence and the Constitution.

Stewart traces the evidence through the centuries, showing how Epicurean language and ideas made their way into Enlightenment philosophy, and from there to American statesmen like Jefferson, Franklin, Adams and Madison. But where this book stands out is its meticulous examination of two other revolutionaries, both of whom are of lesser stature but equal importance.

One is Ethan Allen, the buckskin-clad Vermont mountain man and revolutionary firebrand. Although he’s known best for his capture of Fort Ticonderoga, Allen strove to cultivate a reputation as a thinker. His crowning effort was a book, Reason the Only Oracle of Man, which fiercely attacked Christianity and advanced deist ideas (anticipating Thomas Paine’s similar, but later, Age of Reason). Though Allen claimed to be self-taught, to be promoting nothing but principles of reason that he figured out himself in a backwoods shack, his work has clear and demonstrable similarities to other advocates of Epicureanism, showing that deist thinking was pervasive even on the rural American frontier.

The other is a figure who’s mostly forgotten, but deserves much wider acclaim: Dr. Thomas Young, one of the earliest, fiercest and most radical American patriots. The Boston Tea Party was his idea; he helped to found early revolutionary groups like the Albany Sons of Liberty and the Boston Committee of Correspondence; and he engineered a coup that tipped Pennsylvania into joining the independence movement, and then helped write its trailblazing state constitution. He died early, in 1777, while serving with the Continental Army, which probably has something to do with why he’s little remembered.

But another part of the reason is that Young, like Allen and Paine, was as radical in his religion as he was in his politics. He was regularly accused of being an “infidel”, a charge which he scarcely bothered to deny. Stewart marshals evidence to show that he’s the likely author of an anonymous tract, Sermon on Natural Religion, which ferociously attacked the divine inspiration of the Bible and other Christian ideas. And, like Paine, he was swept under the rug by subsequent generations who cherished the notion that America was established by men who professed a more conventional faith.

Tying all these historical threads together, Stewart makes the case that deism was humanity’s first attempt at a rational religion, in the sense of a religion that rests only on premises which are claimed to be demonstrable by reason. Following in the footsteps of Epicurus, it postulates an orderly and comprehensible universe, self-contained and self-sufficient, infinite and eternal, without center or edge, producing life endlessly in a constant flux of forms.

But more radical still were deism’s theological claims. Deist thinkers postulated that God isn’t an object in the world, but the fundamental principle of order that underlies existence. In short, they believed that what we call “God” is simply the sum total of the laws of nature – a position that we’d now refer to as pantheism – and that religious devotion consists solely of furthering our understanding of the world through science. This variety of religion allows for no miracles, postulates no individual afterlife of reward or punishment, and imposes no duty on humanity except striving to live virtuously. In short, and as Stewart doesn’t shy from pointing out, the philosophy that inspired America’s founders was in all practical respects indistinguishable from atheism. 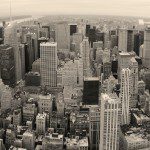 September 12, 2014 Atlas Shrugged: Homo Economicus
Recent Comments
12 Comments | Leave a Comment
"they avowed their certainty that Jesus would bring her back to life:Despite this not being ..."
Bob Seidensticker The Strange Sad Story of Olive ..."
"...currently every single link in the "Trending at Patheos Nonreligious" is to a "I'm moving ..."
OverlappingMagisteria Announcing: OnlySky
"I've already signed up on Jonathan Pearce's site. Looking forward to the new digs."
ORAXX Announcing: OnlySky
"Interesting. Although if Andrew Hall is coming along, I hope the new site will make ..."
bificommander Announcing: OnlySky
Browse Our Archives
get the latest updates from
Daylight Atheism
and the Patheos
Nonreligious
Channel
POPULAR AT PATHEOS Nonreligious
1