As I’ve mentioned previously, Jerry Coyne of Why Evolution Is True wrote a post this weekend in which he let it be known that he was very upset with me and my article in the Guardian on Richard Dawkins. Well, you’ll never guess who showed up to post this unbelievable comment: 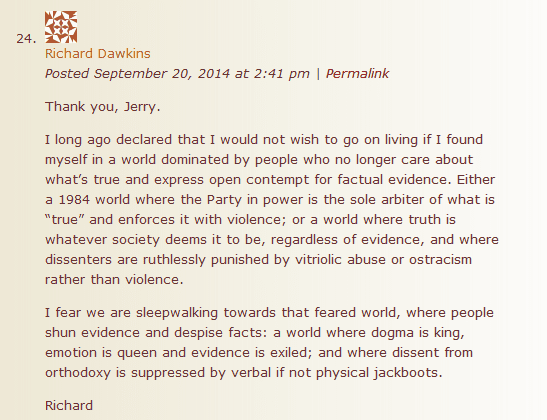 I long ago declared that I would not wish to go on living if I found myself in a world dominated by people who no longer care about what’s true and express open contempt for factual evidence. Either a 1984 world where the Party in power is the sole arbiter of what is “true” and enforces it with violence; or a world where truth is whatever society deems it to be, regardless of evidence, and where dissenters are ruthlessly punished by vitriolic abuse or ostracism rather than violence.

I fear we are sleepwalking towards that feared world, where people shun evidence and despise facts: a world where dogma is king, emotion is queen and evidence is exiled; and where dissent from orthodoxy is suppressed by verbal if not physical jackboots.

I don’t have any way to prove this is really Dawkins, but I know that Coyne moderates the comments on his own site. Presumably, he would have taken this one down if he had reason to believe it was an impersonator.

So: I think Richard Dawkins needs to be reminded of some facts that seem to have slipped his mind. Dawkins is an international best-selling author, science popularizer, and professor emeritus at Oxford. His net worth, apparently, is somewhere in the neighborhood of $130 million, and he’s married to an actress who used to be on Doctor Who. He’s gotten more awards and honors than either of us can count, and I’m pretty sure he can command a speaking fee for a single appearance that’s more than what I make in a year.

I, on the other hand, am an atheist blogger who writes articles. When people say things I disagree with, sometimes I write articles criticizing them.

Yet he seems to be the one who’s afraid of me. And not just afraid, either: he writes as if I’m personally responsible for bringing about these coming thousand years of darkness, where hooded inquisitors will roam the land putting heretics to the torch and all dissent will be crushed under “verbal if not physical jackboots”. (Yes, the most evil weapon ever: jackboots made of words!)

I’m not Lex Luthor, okay? I don’t have a volcano lair or a giant laser on the moon. Even if I wanted my own army of ruthless and sinister secret police, I couldn’t begin to pay their salaries. (Dawkins probably could – again, net worth around $130 million.)

The level of self-pity in Dawkins’ comment defies parody. The man has literally built a career out of wielding a sharp scalpel of criticism against the religious. Yet when some insignificant blogger tells him that he said something sexist, he instantly goes into a frenzy of woe-is-me breast-beating, lamenting that this can only mean we’re on the verge of a dystopian age where “people shun evidence and despise facts” and where “dogma is king [and] emotion is queen” (and please, please don’t overlook the gendered assumption built into that statement). Because, of course, the only conceivable reason anyone might ever criticize Richard Dawkins is that they hate evidence and facts.

Atheists are routinely accused by the religious of wanting to create a dictatorship, institute thought police, stamp out dissent, etc., etc. Dawkins ought to have first-hand experience of what a sorry attempt at calumny this is. But, again, without a trace or a gleam of irony, he’s turned around and recycled that ridiculous argument so often used against him in a bid to suppress criticism from fellow atheists. It didn’t work then, and it won’t work now.

Quite honestly, I’m embarrassed on Dawkins’ behalf. Is this what he considers a proportionate response to criticism? Does he think this gnashing of teeth and rending of garments makes him look like the reasonable one? My article certainly isn’t the first criticism he’s ever received and I greatly doubt it’s the harshest. If he’s going to fly off the handle like this, the least he can do is show a little perspective and respond with more understanding and compassion when people are targeted by actual harassment and threats.