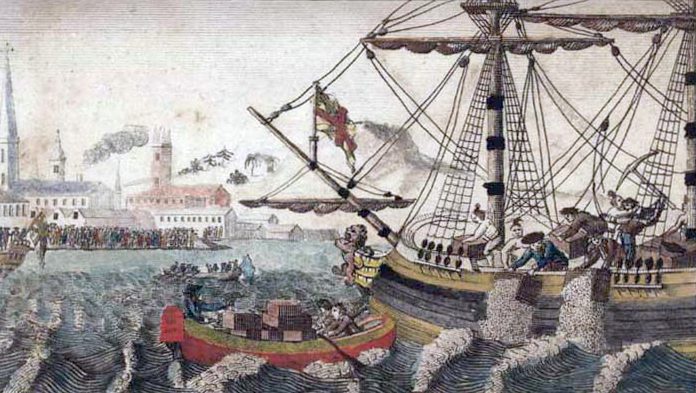 When someone pops up out of nowhere on a lonely road late at night to hand you a bar of gold, it probably wouldn’t be your first impulse to wonder how they determined how much gold to give you. But Hank Rearden is curious, and Ragnar Danneskjold has an answer for that, too:

“If men refuse to pay the debt they owe you, this is the manner in which they will pay for it. But there is one part of the debt which is computed and on record. That is the part which I have made it my purpose to collect and return to you.”

“Your income tax for the last twelve years.”

“You intend to refund that?”

Rearden burst out laughing; he laughed like a young boy, in simple amusement, in enjoyment of the incredible. “Good God! You’re a policeman and a collector of Internal Revenue, too?”

Ayn Rand wasn’t an anarchist. She believed there was a role for government to play in providing a police force to protect citizens from crime, courts to enforce contracts, and a military to defend against outside threats. (Danneskjold himself mentioned this as one of the proper functions of the state.)

But if there’s anything that Rand insisted upon, it’s that everything worthwhile has a price tag. If you want to have a police or military, you have to pay for their training, their equipment, their salaries, their barracks. Police need evidence laboratories; troops need bases and armories. Assuming they catch criminals, you’ll need prisons for the convicted (even if they’re private prisons, that just means the state is paying private companies to administer the prison on their behalf). And if you expect your soldiers to fight and be wounded, shouldn’t you also have doctors and medical facilities for them?

To have courts, you need bailiffs, stenographers, legal clerks, courthouses and records offices, for a start. Then multiply all this by however many levels of appeals courts you have. And, of course, if you have laws, you’ll need some sort of lawmaking body to pass them and set the penalties for breaking them. Those lawmakers, too, will need offices, salaries and staffers to do research.

In short, even Ayn Rand’s “minimal” government requires a whole complex infrastructure of trained professionals. That doesn’t come cheap, even if you assume that crime will be much lower in an Objectivist utopia due to the prosperity-generating magic of the free market (and in reality, highly unequal societies have higher, not lower, crime rates).

So how do you pay for all this? As we’ve just seen, Rand doesn’t believe in income tax. Actually, that’s putting it mildly: she’s so violently opposed to income tax that she considers it legitimate to wage a campaign of terrorism and piracy against the government to steal back enough money to repay it in full. (In his wedding speech in an earlier chapter, Francisco d’Anconia called taxes “protection money” and tax collectors “gangsters”, a clear declaration of belief in their illegitimacy.)

You might suggest that sales tax, rather than income tax, could be the means of funding an Objectivist government. But in fact, Rand seems to be against taxation, period. She strongly implies that it should be possible to live without paying taxes at all – as in this line of dialogue where Danneskjold tells Rearden that taxes shouldn’t be thought of as an inevitable necessity:

“Are you thinking that death and taxes are our only certainty, Mr. Rearden? Well, there’s nothing I can do about the first, but if I lift the burden of the second, men might learn to see the connection between the two and what a longer, happier life they have the power to achieve. They might learn to hold, not death and taxes, but life and production as their two absolutes and as the base of their moral code.”

As with private ownership of weapons, this was one of the subjects that Rand usually dismissed with a handwave. (“She didn’t propose any one definite means of replacing taxation”, according to one of her acolytes.)

But on one occasion, she did address it, in an essay titled “Government Financing in a Free Society”. In it, she argued that in her ideal society, government financing would be purely voluntary – that people would just give money to the state to underwrite these functions, out of the benevolence of their hearts:

In a fully free society, taxation — or, to be exact, payment for governmental services — would be voluntary. Since the proper services of a government — the police, the armed forces, the law courts — are demonstrably needed by individual citizens and affect their interests directly, the citizens would (and should) be willing to pay for such services, as they pay for insurance. (source)

There’s a massive irony here. For all the flaws in Rand’s own philosophy, she understood perfectly well why communism doesn’t work: namely, it suffers from a severe tragedy-of-the-commons problem. It’s untenable to pay everyone the same regardless of how productive they are, because free riders who contribute nothing will exploit the system to the point of collapse. There’s a scene in a later chapter that makes this logic explicit.

And yet, she proposed an ideology that suffers from exactly the same problem! If the government is funded by voluntary donations, there’s a selfish incentive for people to use its services without paying their fair share for its upkeep. Just as with communism, the inevitable appearance of free riders would drain the state and ensure its downfall. (That’s not even to mention the problem of wealthy people who could control the justice system by threatening to stop donating if they don’t get the results they want.)

In this chapter, Rand addresses the same issue obliquely, by having Rearden bring up the obvious point that Danneskjold is endangering his own life for what appears to be the sake of charity:

Rearden smiled contemptuously. “Aren’t you one of those damn altruists who spends his time on a non-profit venture and risks his life merely to serve others?”

“No, Mr. Rearden. I am investing my time in my own future. When we are free and have to start rebuilding from out of the ruins, I want to see the world reborn as fast as possible. If there is, then, some working capital in the right hands — in the hands of our best, our most productive men — it will save years for the rest of us and, incidentally, centuries for the history of the country.”

First: Rand seems to take it for granted that when the looters’ system collapses and the surviving capitalists emerge into the ruins of industrial society, the first thing they’ll need is money. What on earth for?

In that postapocalyptic future, where just a few thousand capitalists are left to roam a depopulated earth, there’ll be vast amounts of unclaimed land and salvageable technology free for the taking. What would they need to buy, and from who? Even in the best case, they’d all be living at a basic subsistence level for a very long time. There’ll be nothing to invest in and nothing to do with “working capital”.

Second: Rand was clearly oblivious to the huge hole this blows in her self-interest scheme. She always maintained that it’s morally wrong to spend your own money or risk your own life in the name of generosity or service to others. Instead, she asserted that you should selfishly pursue your own desires at all times and above all else. But if the goal I choose is “wanting to build the best society possible”, then I can act in exactly the way she says I shouldn’t, even while being “selfish”. If selfishness can stretch far enough to accommodate what Danneskjold is doing, then the term is meaningless.

In the end, their conversation is curtailed when a police car pulls up alongside them. The officer behind the wheel recognizes Hank Rearden, says they’re looking for a notorious criminal known to be at large in the countryside, and asks if he’s seen him. In a snap decision, Rearden says he hasn’t and shields Danneskjold by telling the police that the pirate is his bodyguard. The police accept this and drive off:

“You haven’t told a lie,” said Ragnar Danneskjold. “Your bodyguard — that’s what I am and what I’ll deserve to be, in many more ways than you can know at present. Thanks, Mr. Rearden, and so long — we’ll meet again much sooner than I had hoped.”

He was gone before Rearden could answer. He vanished beyond the stone fence, as abruptly and soundlessly as he had come. When Rearden turned to look through the farm field, there was no trace of him and no sign of movement anywhere in the darkness.

Danneskjold will be back later, as you can probably guess. But what I’m excited about is that the upcoming scene is the most infamous one in this entire book. Stay tuned, as I delve into it beginning next week!

December 1, 2014 Meet the American Religious Right Figures Thrilled by Russia's Brutal Anti-Gay Laws
Recent Comments
0 | Leave a Comment
Browse Our Archives
get the latest from
Daylight Atheism
Sign up for our newsletter
POPULAR AT PATHEOS Nonreligious
1