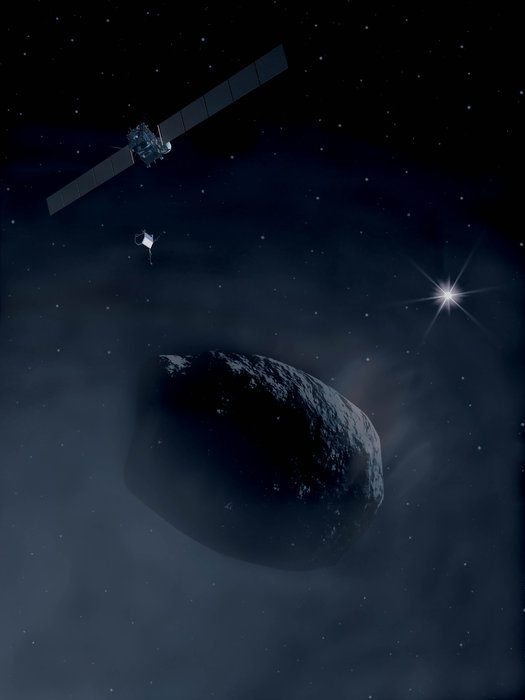 The last few weeks have offered atheists and progressives ample reason to feel discouraged. Down on Earth, anti-rational fundamentalism runs riot, and angry, reactionary conservatism seems stronger than ever. But in spite of all this, in spite of the many obstacles that encircle us and limit us, humanity is accomplishing great things among the stars.

The latest of our successful cosmic explorers is the Rosetta spacecraft, a mission of the European Space Agency. Launched in 2004 (!), Rosetta has been on a long and looping odyssey through the inner solar system ever since, swinging past Earth no fewer than three times as it chased its ultimate objective: the comet 67P/Churyumov-Gerasimenko, a two-lobed snowball the mass of a mountain hurtling through space. Earlier this year, Rosetta made that rendezvous, becoming the first human-built craft to orbit a comet and sending back gorgeous, detailed pictures of the icy nucleus from up close (check out this fantastic image of how big the comet is in comparison to Los Angeles). These observations, scientists hope, will help answer the questions of whether Earth’s water and even its organic molecules were delivered by comets in the early solar system.

Last week, the ESA kicked off the second and even more ambitious phase of the mission. The Rosetta craft carried a smaller robotic lander, named Philae, which it released. The plan was for Philae to drift down to the comet under the pull of its (very weak) gravity, and upon landing, fire two harpoons into the comet’s rocky, uneven surface to anchor itself in place. As with the spectacularly complex Mars Curiosity skycrane, Rosetta was too far from Earth mission control (500 million kilometers, about 30 light-minutes) to control this maneuver in real time, so it was all up to the lander’s automated systems.

As human beings watched with heart in throat, Philae made its descent. At first, it seemed all had gone according to plan, but then there was some bad news: Philae had landed, but the harpoons failed to fire, and it bounced twice before coming to rest. Even that would have been fine, except that it ended up in the deep shadow of a cliff, where its solar panels wouldn’t function and it could only transmit for the brief life of its onboard batteries. Even so, Philae heroically managed to send back data from each of its scientific instruments before it ran out of power and had to shut down.

This is a setback, but it isn’t the end of the mission. Rosetta is still in orbit and can continue making observations. What’s more, comet 67P is falling toward the Sun, and it’s possible that by the time of its closest approach next August, Philae will be receiving enough solar energy to reawaken. And even if it doesn’t, the mission has once again raised our gaze to the sky and expanded our conception of what human beings can accomplish. Like all our robotic ambassadors, it shows that we’re capable of great deeds in the service of pure science.

There’s one unfortunate coda that’s also part of this story. On the morning of the Philae landing, the Rosetta project’s lead scientist, Matt Taylor, gave a live press conference while wearing a shirt festooned with pictures of semi-naked women. Evidently, neither he nor anyone else on his team saw any problem with this before it was pointed out to them.

Like many scientific fields, astronomy suffers from a chronic problem of underrepresentation and exclusion of women, and this is a perfect illustration of why. It’s a highly visible example of the kind of constant microaggressions that make women feel unwelcome and unwanted in a male-dominated field. As Greta Christina said:

To Taylor’s credit, he later apologized. But even after he did, you’ll never guess who just had to weigh in on the situation. And if you guessed Richard Dawkins, give yourself a star.

While the controversy was raging, Dawkins issued a pompous, mansplaining tweet, calling women who said that the shirt made them feel unwelcome or unwanted “idiots”, and condescendingly decreeing that “true feminism” has more important things to worry about (Dear Muslima, anyone?). In what’s becoming a pattern for him, he later deleted the tweet after sharp criticism from scientists like Carolyn Porco, but continues to stubbornly insist that he was right.

I’m no longer surprised to see this kind of aggressively ignorant sexism from Dawkins. At this point, he’s established that he wishes to be known first and foremost for bull-headed and callous remarks like these, and I’ve ceased to expect anything better from him. Nor am I surprised that the internet’s misogynist brigade has been snarling abuse and threats against women who criticized the shirt. But I’m pleased to hear that as a result of this fracas, you may soon be able to buy a shirt with a much more fitting depiction of the role of women in science:

there, I fixed it pic.twitter.com/Z3gZQGh4GE