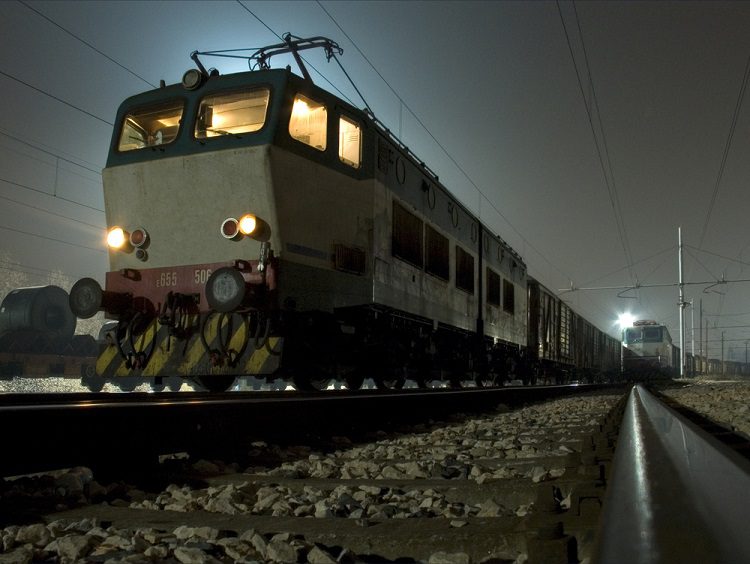 In the previous installment, I wrote that we were approaching the most infamous scene in Atlas Shrugged. The scene that ends this chapter, more than any other, lays bare what Rand thinks of people who don’t subscribe to her philosophy – and what she believes should happen to them because of it.

But I’m getting ahead of myself. First, the setting: we’re in the wilderness of Colorado, late at night, on a Taggart Transcontinental train that’s climbing a steep and narrow pass through the Rocky Mountains. And now, our dramatis personae:

Kip Chalmers swore as the train lurched and spilled his cocktail over the table top. He slumped forward, his elbow in the puddle, and said:

“God damn these railroads! What’s the matter with their track? You’d think with all the money they’ve got they’d disgorge a little, so we wouldn’t have to bump like farmers on a hay cart!”

…Kip Chalmers had curly blond hair and a shapeless mouth. He came from a semi-wealthy, semi-distinguished family, but he sneered at wealth and distinction in a manner which implied that only a top rank aristocrat could permit himself such a degree of cynical indifference. He had graduated from a college which specialized in breeding that kind of aristocracy. The college had taught him that the purpose of ideas is to fool those who are stupid enough to think.

Chalmers is running for a congressional seat in California, “though he knew nothing about that state except the movie industry and the beach clubs” (so, um, they still have elections in Randworld, even though the Constitution has been revoked and every law is now made by a few guys in a room in Washington, D.C.?).

He has a campaign rally the next day, and he’s just realized that the train is running so late, he’s in danger of missing it. What’s more, these aren’t show elections, as you’d expect in a dictatorship. Chalmers is genuinely worried that he’ll lose if he can’t get to the rally in time, which would mean the end of his political career.

As we saw earlier, Rand is largely contemptuous of the college-educated, and this passage is another example. And while she doesn’t dwell on it, it seems that she’s equally contemptuous of democracy. The strange implication here is that, even as the country is disintegrating, there’s still no real opposition to speak of. The socialist politicians who’ve ruined the economy, and even stripped people’s personal freedom to choose where they work, don’t seem to have suffered any blowback. There’s no serious throw-the-bums-out movement; the citizens are content to keep voting for those who make their lives miserable. (Presumably, the only people who know how to vote correctly are the super-capitalists, which is why they deserve to be in charge of everything even if they’re a tiny minority.)

Lester Tuck, his campaign manager, was a small, aging man with a face that looked as if it had once been punched in and had never rebounded. He was an attorney who, some generations earlier, would have represented shoplifters and people who stage accidents on the premises of rich corporations; now he found that he could do better by representing men like Kip Chalmers.

This description recalls the famous McDonald’s coffee case, in which a woman named Stella Liebeck sued when she was burned by hot drive-thru coffee that spilled in her lap. The lawsuit was widely ridiculed and treated as a poster child for frivolous litigation, but the facts show it had more merit than the media acknowledged.

Prior to the lawsuit, McDonald’s had a policy of serving coffee at around 190 degrees, hot enough to cause severe and near-instantaneous burns. (Liebeck suffered third-degree burns over 6% of her body and required skin grafts.) That isn’t a hazard you might reasonably expect from a cup of coffee. More importantly, McDonald’s knew its coffee was dangerously hot. Before the lawsuit, it had been quietly paying off a string of people who’d been burned in similar accidents. When a company is selling products that harm people and knows it, a civil suit is the appropriate response.

Laura Bradford was Chalmers’ current mistress… She was a movie actress who had forced her way from competent featured player to incompetent star, not by means of sleeping with studio executives, but by taking the long-distance short cut of sleeping with bureaucrats. She talked economics, instead of glamor, for press interviews, in the belligerently righteous style of a third-rate tabloid; her economics consisted of the assertion that “we’ve got to help the poor.”

The starlet who gets plum roles by sleeping with studio executives is a well-known sexist cliche. But here we have a variant: a woman who becomes a movie star by sleeping with government bureaucrats. In Randworld, this is normal and plausible.

Gilbert Keith-Worthing was Chalmers’ guest, for no reason that either of them could discover. He was a British novelist of world fame, who had been popular thirty years ago; since then, nobody bothered to read what he wrote, but everybody accepted him as a walking classic.

This is obviously a bad argument, since there are degrees of freedom, and we can reasonably conclude that more freedom is better than less even if absolute freedom is impossible. But Rand doesn’t seem to notice that her political philosophy relies on this very same bad argument.

What good does it do a person to be “free” (in Rand’s preferred, purely economic sense) if they’re cold, hungry, homeless, or sick with a disease they can’t afford to treat? Is that a state that anyone would rationally desire to be in? If not, why would we want to construct a society that, through lack of a safety net, routinely permits this to happen?

This harks back to the difference between negative and positive liberty, a distinction that libertarians consistently overlook. It does me no good to be free from state coercion if I can’t achieve what I desire.

Kip Chalmers sat staring at his glass. “I’m going to have the government seize all the railroads,” he said, his voice low.

“Really,” said Gilbert Keith-Worthing, “I don’t see why you haven’t done it long ago. This is the only country on earth backward enough to permit private ownership of railroads.”

“Well, we’re catching up with you,” said Kip Chalmers.

“Your country is so incredibly naive. It’s such an anachronism. All that talk about liberty and human rights — I haven’t heard it since the days of my great-grandfather. It’s nothing but a verbal luxury of the rich. After all, it doesn’t make any difference to the poor whether their livelihood is at the mercy of an industrialist or of a bureaucrat.”

Since this is a villainous looter and we’re meant to reject everything he says as false, the implied conclusion that the poor should care whether their livelihood comes from government or from private industry. And I agree – except that I’d draw the opposite conclusion Rand probably would. After all, in a democracy, the poor have some say in how they’re governed; under the thumb of a private power like a landowner, they have essentially none.

As the train rattles and sways through the mountains, one of Chalmers’ companions nervously asks if their railroads are safe. Chalmers snaps, “We’ve got so many rules, regulations and controls that those bastards wouldn’t dare not to be safe!” And, as if on cue:

The jolt felt as if the air within the car smashed them forward while the floor stopped under their feet. Kip Chalmers was flung down to the carpet, Gilbert Keith-Worthing was thrown across the table top, the lights were blasted out.

No one is seriously hurt, but the passengers are in hysterics. Chalmers staggers to his feet and stumbles out of the car, where he finds the conductor going down the line with a flashlight:

“Split rail,” the conductor answered impassively. “The engine went off the track.”

The engine that was pulling them is beyond repair. The engineer goes to call for help on an emergency phone, and is able to get in touch with the night dispatcher, who sends an ancient locomotive to pull the wounded train to the nearest station.

But there’s a looming problem. Between them and San Francisco is the Taggart Tunnel, an eight-mile railroad tunnel cut through the Rocky Mountains by Nat Taggart’s grandson. Because the tunnel is so long, only a diesel engine can make it through safely; the smoke from a coal-burning locomotive would build up and suffocate the train’s passengers. Of course, due to the deterioration of the railroad, there’s no spare diesel engine available. When the conductor explains all this, Kip Chalmers isn’t happy:

“Damn your tunnel!” he screamed. “Do you think I’m going to let you hold me up because of some miserable tunnel? Do you want to wreck vital national plans on account of a tunnel? Tell your engineer that I must be in San Francisco by evening and that he’s got to get me there!”

You can probably guess what’s about to happen. But either way, the story continues next week, so stay tuned!