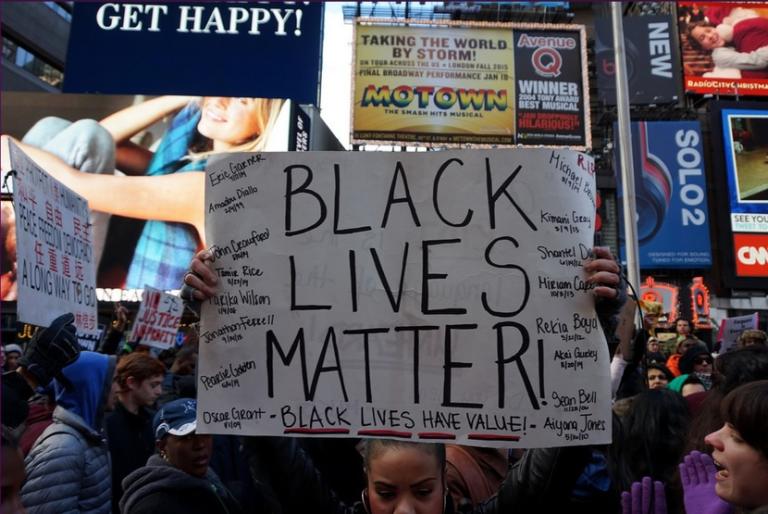 Just a few days after the non-indictment of Officer Darren Wilson unleashed fury in Ferguson, there’s been another civil rights outrage in a nation that’s weary of them. This time, it was the police killing of Eric Garner, a black man in Staten Island, allegedly for selling loose cigarettes on the sidewalk.

The circumstances of this are even less debatable than the Michael Brown shooting, since the entire encounter was captured on video. Garner wasn’t violent; all he did was argue with the police about being arrested. For this, he was tackled to the ground and choked to death by police officers who ignored his pleading that he couldn’t breathe. Yet once again, a grand jury refused to return an indictment; and while we don’t know for certain, this looks like another rigged, one-sided trial masquerading as a grand jury, since yet again the officer who used the forbidden chokehold on Garner was invited to testify in his own defense.

The past few days have seen massive demonstrations in New York City in response, including a march across the Brooklyn Bridge, a “die-in” in Grand Central Terminal, and a protest of the Christmas tree lighting in Rockefeller Center. Protesters have shut down streets, bridges and parks in solidarity in Chicago, Boston, Atlanta, Los Angeles, Washington, D.C., Baltimore, Pittsburgh, Oakland, Berkeley, Anchorage, and elsewhere – even other countries. Mayor Bill de Blasio has spoken about how he’s taught his biracial son, Dante, to be especially careful if he encounters the police. A hashtag has also emerged, #CrimingWhileWhite, in which white people confess to petty theft, drug use, or other crimes for which they got a warning or a slap on the wrist, whereas for a black person these acts would mean arrest, incarceration and a life-destroying criminal record.

At this point, the anger isn’t just about Michael Brown or Eric Garner. It’s also about Tamir Rice, the 12-year-old boy in Cleveland who was shot to death for playing with a fake gun in a park. (A police car pulled up, an officer jumped out and shot him within seconds – there was no opportunity for the boy to obey a command to put the gun down. It later emerged that the officer had been dismissed from another police department for being “emotionally unprepared to cope with stresses of the job“).

It’s also about Akai Gurley, who was fatally shot in a Brooklyn housing project when a police officer accidentally fired his gun and hit him in the chest. According to the Daily News, as Gurley lay dying, the officer texted his union rep before calling for medical help.

And we could add many, many more names to this sad list, from incidents all over the country: police officers who threw a flashbang grenade into a baby’s crib, who told a man to take out his driver’s license and then shot him as he complied, who riddled a car carrying two unarmed passengers with 137 bullets, who killed a man in a Wal-Mart for holding an air rifle that was sold at that very store… the list seems endless. Needless to say, the vast majority of victims in stories like these are black. It’s hard to say if this level of police brutality is new, or if we’re just hearing about it more often because social media brings it to light. (Literally, it’s hard to say: police don’t keep track of the number of people they kill.)

If we’re going to put a stop to this, one obvious step would be to require police departments to keep track of shootings by officers. Another would be a permanent special prosecutor to investigate accusations of brutality, since it’s now obvious that local DAs can’t be trusted to prosecute misdeeds by police whom they work with on a daily basis. We also need, badly, to renegotiate union contracts that keep incompetent, abusive or outright criminal cops from being fired.

I’d also support requiring police to wear body cameras. The evidence shows that they help, both in reducing police brutality and civilian complaints; although they’re far from a cure-all, as we saw in the Eric Garner case where every moment of his death was captured on video.

I’m astonished that even pure self-interest hasn’t spurred police departments to support measures like these. I know that good police officers exist (yes, #NotAllCops), and I don’t understand why more of them haven’t spoken out. Police need the trust and cooperation of the communities they serve: they need witnesses who’ll speak to them, people who’ll report crimes rather than take justice into their own hands. And that’s not even to speak of the enormous effort they’ve spent trying to contain protests of their own actions. It makes the job of the police immeasurably harder when they’re tarred by association with this callous violence. Yet instead of trying to regain that trust, police departments across the nation seem to be engaged in a concerted effort to squander whatever good will people may have.

But even if the police aren’t going to cooperate, the sheer size and racial diversity of these protests – and the enthusiastic public response – gives me hope that we’re approaching a tipping point. The outrage over these unnecessary deaths may give rise to a new civil rights movement, and none too soon.

More than any policy change, we need a cultural shift. Our society is in denial about the hyper-aggressive, trigger-happy policing and mindless lock-’em-up mentality routinely targeted at people of color. In the name of being “post-racial”, we’ve allowed racism to flourish. Too many have been killed by those who were supposed to protect them; too many young people are growing up with a justified fear and distrust of police who act like an occupying power trying to keep them in subjection. I can’t say what it will take to demolish this entrenched structure of prejudice, or whether we’ll succeed in our lifetimes. But I like to think that what we’ve seen so far is a start.

December 10, 2014 The Suppression of Richard Dawkins
Recent Comments
0 | Leave a Comment
Browse Our Archives
get the latest from
Nonreligious
Sign up for our newsletter
POPULAR AT PATHEOS Nonreligious
1