The Frozen River: A Humanist Sermon 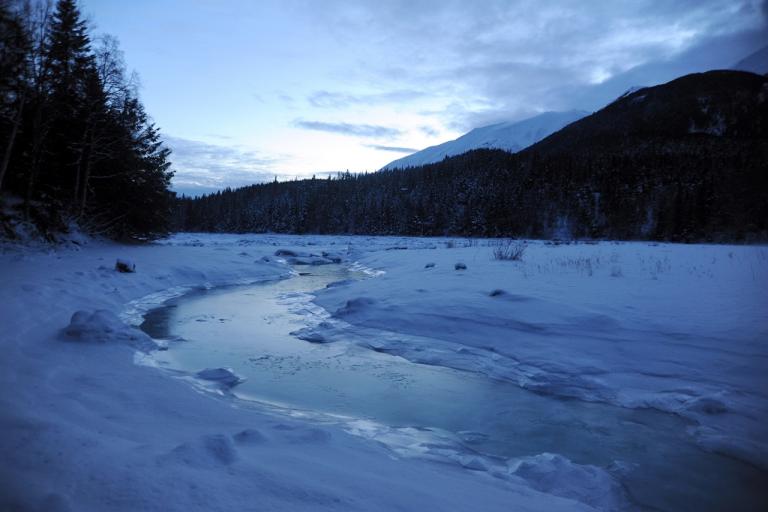 Six years ago, this nation achieved a historic milestone when its people elected a black man to be their president. For a country that was sustained by slave labor for decades after its inception and riven by racism throughout its history, this is an almost unimaginable accomplishment. It’s not that Barack Obama promised to single-handedly inaugurate a new era of progressive utopianism – those of us who followed his political ascent always knew that he was a conciliatory moderate with mildly liberal leanings – but we took his election as, perhaps, a sign that we had well and truly put our unsavory past behind us, that the old racial divisions had begun to heal.

Today, it’s easy to laugh bitterly at how naive that hope was. President Obama had scarcely stepped into the Oval Office before his enemies and detractors kicked off an era of paralyzing polarization that continues today, with no end in sight. Aside from a brief window at the beginning of his presidency, our government has been bemired: not even able to repair a crumbling infrastructure, much less to embark on grand, ambitious projects on the scale of the interstate highway system or the moon landing. All the while, the looming catastrophe of climate change barrels down on us, the economy continues to limp along and the already-obscene wealth gap to widen, and even the president’s one signature achievement, healthcare reform, is enduring a relentless legal battering.

And then, over the course of a sweltering summer in Ferguson, Missouri, things got worse. The fatal shooting of an unarmed black teenager, the legal system’s kid-gloves handling of his killer, and the enormous protests that spread like wildfire across the nation in response, shone a harsh light on the burden that people of color face every day: ongoing discrimination, unequal treatment under the law, and state-sanctioned violence at the hands of militarized police. Even vigilante private citizens seem able to shoot and kill young black men with no repercussion. While these protests could yet lead to a new civil rights era, it’s a sad commentary on our time that such a thing could even be seen as necessary.

The roll call of disappointment could go on and on: the erosion of reproductive rights across the nation; misogynistic hate campaigns against outspoken women and other activists large and small; the abortive uprising of the Arab Spring that’s led to horrible carnage in Syria and a renewal of autocracy in Egypt; democratic leadership all around the world that’s been weak, indecisive or ineffective just when it’s needed most. Even when the people have risen up to demand change, they’ve found every path of redress blocked, every channel dammed.

A great man once forecast the day when justice would roll down like water, and I hope to see that day come. But right now, it seems we’re in the midst of a cold winter when the river of justice is frozen solid and doesn’t flow, and there’s no telling when the thaw may be.

And yet, even in this dark season, there are reasons to hold fast to hope. The injustices and evils that happen in the world have never been more noticeable than now, when the internet and social media have turned billions of people into journalists. But we have to take care not to confuse greater visibility with greater frequency. Almost none of these evils are new; rather, they were happening all along, unreported and unremarked-on, and bringing them into the light is the first, necessary step in correcting them. This, I think, is especially true when it comes to racism in the justice system and violent harassment of women, two issues that came to public attention this year in a huge way.

Another is that, in spite of regional wars and conflicts, global rates of violence continue their slow, steady decline. Even some of the world’s formerly most dangerous places have seen major improvements in peace and stability. Hunger, severe poverty, child mortality, and other social ills have all been falling as well and are continuing to do so. Long-lasting contraception gives people more reproductive freedom than ever. Again, these trends are quiet, unshowy, and easy to miss among spectacular and dispiriting outbursts of violence – but no less real.

And in some areas, progress doesn’t have to be inferred from columns of numbers. One is the march of marriage equality, which has made leaps and bounds in this year alone despite the raging of religious conservatives. We’ve taken significant steps toward ending the vast exercise in futility that is the drug war, and dismantling the prison-industrial complex it gave rise to. There was a historic climate agreement between the U.S. and China, and an accelerating rollout of renewable energy as prices for solar and wind power continue their plummet, with new installations now outpacing coal.

These stories show that moral progress hasn’t been fully arrested, whatever the headlines say. There are places where it’s been obstructed, but like any river, when its way is blocked, it seeks new outlets. And even where it’s met barriers, it can’t be halted forever. The course of justice can be slowed to a bare trickle, or delayed for a season. But when the wheel turns and the sun rises, that ice may break up and the torrent may flow far faster than we’d ever have thought possible.

December 22, 2014
Book Reviews: Fighting Back the Right, Living the Secular Life
Next Post

December 26, 2014 Atlas Shrugged: Buy Local
Recent Comments
0 | Leave a Comment
"More or less Marvin Harris's explanation in Cows, Pigs, War, Witches."
TBP100 The Fountainhead: Wool and Linen
"Thank you very much! It's an honor to be mentioned in the same sentence as ..."
Adam Lee Commonwealth, III.XVII: Project Chicxulub
"The end of an era. Well, here's hoping for a succesfull new site."
bificommander There’s a Change Coming…
"Yes, it should! I need to correct that."
Adam Lee Commonwealth, III.XVII: Project Chicxulub
Browse Our Archives
get the latest from
Nonreligious
Sign up for our newsletter
POPULAR AT PATHEOS Nonreligious
1