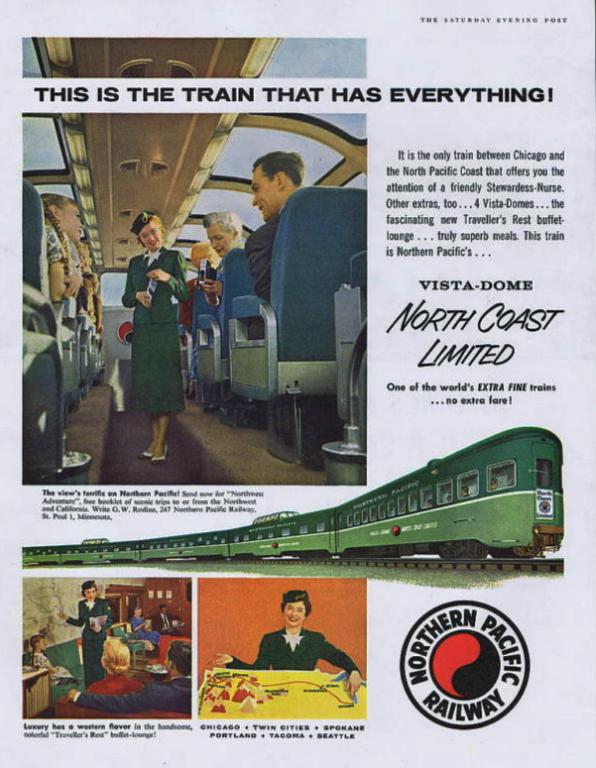 Having heard the tramp’s conveniently about-to-be-relevant tale, Dagny drifts off to sleep, puzzling over what it might mean. When she wakes up, it’s to a sudden, disorienting silence: the train has stopped moving.

The sweep of her hand pressed the light switch and the bell to summon the porter. The electric light came on and brought her back to a rational world. She glanced at her watch: it was a few minutes past midnight. She looked out of the rear window: the track went off in a straight line and, at the prescribed distance, she saw the red lanterns left on the ground, placed conscientiously to protect the rear of the train.

Dagny runs the length of the train, finding all the staff gone and the passengers asleep or huddled in their own compartments, except one: a man she recognizes. His name is Owen Kellogg, a sharp young engineer who used to work for Taggart Transcontinental, until he mysteriously turned down a promotion she offered him, then quit his job and vanished.

“Kellogg!” she gasped, the sound of laughter in her voice like a cry of relief at the sudden sight of a man in a desert.

“Hello, Miss Taggart,” he answered, with an astonished smile that held a touch of incredulous pleasure – and of wistfulness. “I didn’t know you were aboard.”

…They went the length of the train, finding no porters, no waiters in the diner, no brakemen, no conductor. They glanced at each other once in a while, but kept silent. They knew the stories of abandoned trains, of the crews that vanished in sudden bursts of rebellion against serfdom.

…She turned to go, but stopped. She knew it was useless to comment, but the words came involuntarily. “You know,” she said, “it’s those lanterns our men put behind the train to protect us that’s the hardest thing to take. They… they felt more concern for human lives than their country had shown for theirs.”

It’s true: even though the crew walked off their jobs, leaving safety lanterns on the track behind them was a thoughtful gesture, showing concern for the lives of the people on the train. It’s certainly more concern than any of the novel’s nominal heroes show; since, when they eventually quit their jobs and join John Galt’s strike, they do so with the express intention of causing civilization to collapse and millions of people to starve to death. Unlike her own employees, Dagny has no concern for the lives of the people she leaves behind. (I’ve said it before: in spite of herself, Rand is writing a novel where the ordinary, decent working-class people – the Eddie Willerses of the world – are the real heroes, not the arrogant, uncaring industrialists.)

Dagny and Kellogg stop at the head of the train, where a group of passengers are milling about in confusion and mounting panic. She explains to everyone what’s happened:

“Is there anyone here who wishes to be spokesman for the passengers?” she asked.

They looked at one another. There was no answer.

“Very well,” she said. “You don’t have to speak. I’m Dagny Taggart, the Operating Vice-President of this railroad, and”—there was a rustle of response from the group, half-movement, half-whisper, resembling relief—”and I’ll do the speaking. We are on a train that has been abandoned by its crew. There was no physical accident. The engine is intact. But there is no one to run it. This is what the newspapers call a frozen train. You all know what it means — and you know the reasons. Perhaps you knew the reasons long before they were discovered by the men who deserted you tonight. The law forbade them to desert. But this will not help you now.”

… “Just where are we?” asked a bulky man with too expensive an overcoat and too flabby a face; his voice had a tone intended for servants by a man unfit to employ them. “In what part of what state?”

“How long will we be kept here?” asked another, in the tone of a creditor who is imposed upon by a debtor.

“When will we get to San Francisco?” asked a third, in the manner of a sheriff addressing a suspect.

The demanding resentment was breaking loose, in small, crackling puffs, like chestnuts popping open in the dark oven of the minds who now felt certain that they were taken care of and safe.

“This is perfectly outrageous!” yelled a woman, springing forward, throwing her words at Dagny’s face. “You have no right to let this happen! I don’t intend to be kept waiting in the middle of nowhere! I expect transportation!”

“Keep your mouth shut,” said Dagny, “or I’ll lock the train doors and leave you where you are.”

“You can’t do that! You’re a common carrier! You have no right to discriminate against me! I’ll report it to the Unification Board!”

“—if I give you a train to get you within sight or hearing of your Board,” said Dagny, turning away.

“What about the gangs of raiders?” asked another woman’s nervous voice.

…Dagny turned to her, answering in the formal, inflectionless monotone of a business executive, “There have been no cases of raider gang attacks upon frozen trains — unfortunately.”

The text portrays it as an outrageous imposition that the train’s passengers lose their tempers (because how dare a common peasant question a Great Capitalist like Dagny). But didn’t these people buy tickets? Isn’t it true that they have a right to transportation, at least within the context of a business agreement? I know I would be upset if I had to get somewhere and wound up stranded in the middle of the wilderness because the crew of my train all walked off their jobs simultaneously. And since Dagny is the only one present who works for the railroad, doesn’t that make this mess her responsibility?

Dagny’s plan is to walk along the track until she finds an emergency telephone, so she can call the dispatcher and have another crew sent out. She finds the tramp she spoke to earlier (whose name is Jeff Allen, not that this ever becomes relevant) and makes him an honorary railroad employee, ordering him to maintain order until she gets back. Owen Kellogg volunteers to accompany her, and they set out into the darkness.

The narrative expects us to take this all as given. But I think it raises some major questions, even if Rand doesn’t think they’re worthy of answers.

First of all, where did the crew go? We’re told that the train is stopped in the middle of nowhere, many miles from any town or other outpost of civilization. Even if the crew decided to desert, how did they get anywhere? And why wouldn’t they just wait until the train pulled into a town and then quietly slip off? It would be easier for them to get away cleanly if there were crowds to lose themselves in, and they’d probably have more of a head start before anyone noticed they were gone.

Second: Is this what Dagny considers acceptable customer service? She’s running a passenger railroad, and these people, resentful and bad-tempered though they may be, are her customers. As the sole employee of Taggart Transcontinental on the scene, she should be trying to placate them. Instead, she acts as if their presence is an intolerable annoyance. When they complain about being stranded, she treats them with hostility and contempt, telling them that it’s their own fault the train is stuck. She expresses the hope that criminal gangs rob and kill them, then threatens to lock them in and abandon them. Just imagine the headlines when the train finally gets into a station and these people can talk to a reporter about how a Taggart executive treated them!

This is a symptom of a much bigger hole in Ayn Rand’s idea of how a business is run. As I mentioned earlier, both Taggart Transcontinental and Rearden Steel do little or nothing in the way of advertising or marketing. In fact, Dagny and Hank actively shun efforts to promote themselves or their products. As commenter Sneezeguard pointed out in the latest of his hilarious “Cobra Commander” dialogues (you should be reading the comments to see these!), Dagny and all the other protagonists scarcely even seem to recognize that there’s a public they’re supposed to be selling to. If they sit behind a desk with the appropriate squint of grim determination, money just sort of appears.

In the real world, companies spend more than half a trillion dollars on advertising each year: to persuade, to coax, to cajole, to spin their public image, to present themselves in the best light. But this makes for an uncomfortable fit with Ayn Rand’s epistemology, in which the senses can be relied on to give clear, accurate information about the world every time, if properly guided by a rational philosophy (i.e., hers). It’s ironic that her worldview, supposedly the supreme exemplar of capitalism, leaves no role for the advertising industry that’s such a huge part of capitalism as it actually exists.