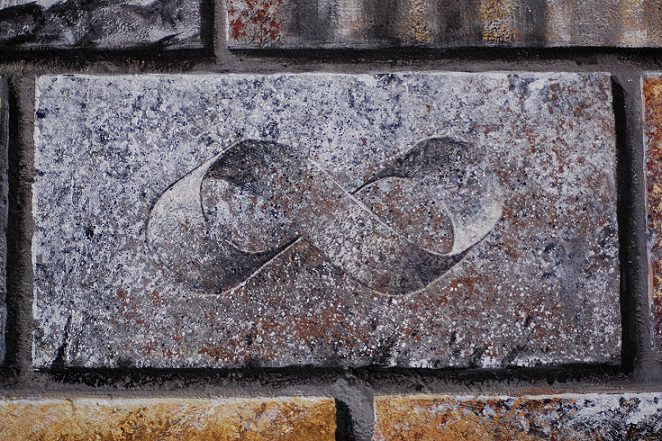 Dagny’s next stop in the valley brings her to a familiar face:

It was not a pass, it was a wall of laminated rock with a complex chain of pipes, pumps and valves climbing like a vine up its narrow ledges, but it bore, on its crest, a huge wooden sign…: Wyatt Oil.

It was oil that ran in a glittering curve from the mouth of a pipe into a tank at the foot of the wall, as the only confession of the tremendous secret struggle inside the stone, as the unobtrusive purpose of all the intricate machinery — but the machinery did not resemble the installations of an oil derrick, and she knew that she was looking at the unborn secret of the Buena Esperanza Pass, she knew that this was oil drawn out of shale by some method men had considered impossible.

Ellis Wyatt stood on a ridge, watching the glass dial of a gauge imbedded in the rock. He saw the car stopping below, and called, “Hi, Dagny! Be with you in a minute!”

When we last saw Ellis Wyatt, he had just blown up his wells, committing a colossal act of ecological devastation against the state of Colorado. Galt’s Gulch is in Colorado. If this novel respected physical reality at all, the soil, air and water of the valley would also have been poisoned by Wyatt’s terrorism and the fallout of toxic petrochemicals it created. That would be a highly ironic and appropriate ending – the capitalists’ secret plan to retreat from society is accidentally ruined by one of their own in an act of spite that was supposed to be aimed at the outside world.

She smiled and asked, pointing at the machinery, “Shale oil?”

“That’s the process which you were working to develop while you were on earth?” She said it involuntarily and she gasped a little at her own words.

“How much do you produce?”

A note of sadness came back into her voice: “It’s the process by which you once intended to fill five tank-trains a day.”

“Dagny,” he said earnestly, pointing at his tank, “one gallon of it is worth more than a trainful back there in hell — because this is mine, all of it, every single drop of it, to be spent on nothing but myself.” He raised his smudged hand, displaying the greasy stains as a treasure, and a black drop on the tip of his finger flashed like a gem in the sun.

This is all very heartwarming and inspiring. I have just one question: What on earth is that oil for?

In case you’ve forgotten, Galt’s Gulch is powered by John Galt’s magic motor, which produces limitless electricity out of the air. No one living here has any reason to burn oil for fuel or heat. Whatever Galt charges for an electrical hookup, he can beat any price Ellis Wyatt could possibly demand. This should have put an end to the market for fossil fuel, yet here Wyatt is, cheerfully pumping away as if nothing has changed.

Granted, you can use oil for machine lubrication, but as far as we’ve seen, Galt’s Gulch has one car and one tractor. They shouldn’t need anything remotely like the “two hundred barrels a day” Wyatt is pumping. You can also use it to manufacture plastic, but again, there’s no mass production in the Gulch on a scale that would justify that. They should need, at most, a trickle of oil – probably nowhere near enough to keep Ellis Wyatt in business.

For a novel that’s obsessed with economic theory, Atlas Shrugged has markedly little concern for economic reality. Rand imagined world-changing inventions, but failed to follow through on the consequences of how they would cause the world to actually change. An economy where perpetual motion machines existed wouldn’t be just like ours except for that one detail; an invention like that would completely transform society. Whole industries would radically change or cease to exist, and many kinds of menial jobs would likely disappear. (What could you do with free energy? Suggest your own ideas in the comments.)

A little later in this chapter, there’s evidence that Ayn Rand had at least a glimmer of this:

She saw a brief glitter of wires among the branches, as they drove out into a clearing. An unobtrusive little structure stood against a hillside, on a rising slant of rocky ground. It was a simple cube of granite, the size of a toolshed, it had no windows, no apertures of any kind, only a door of polished steel and a complex set of wire antennae branching out from the roof. Galt was driving past, leaving it unnoticed, when she asked with a sudden start, “What’s that?”

She saw the faint break of his smile. “The powerhouse.”

…She thought of this structure, half the size of a boxcar, replacing the power plants of the country, the enormous conglomerations of steel, fuel and effort — she thought of the current flowing from this structure, lifting ounces, pounds, tons of strain from the shoulders of those who would make it or use it, adding hours, days and years of liberated time to their lives, be it an extra moment to lift one’s head from one’s task and glance at the sunlight, or an extra pack of cigarettes bought with the money saved from one’s electric bill, or an hour cut from the workday of every factory using power, or a month’s journey through the whole, open width of the world, on a ticket paid for by one day of one’s labor, on a train pulled by the power of this motor — with all the energy of that weight, that strain, that time replaced and paid for by the energy of a single mind who had known how to make connections of wire follow the connections of his thought.

But again, Rand fails to grasp the full implications. One of the themes of this section is that John Galt and the other ubermenschen have quit their jobs and hidden themselves away in protest against a society that won’t compensate them for their work as they deserve. But what does the concept of “deserve” even mean when the product is limitless and free? How does the market value a commodity that took zero effort to produce?

For all the effort Rand spends defending capitalism as not just the best but the only feasible economic system, she’s written a novel where her protagonists take a huge stride towards making capitalism obsolete. John Galt’s motor or something like it would be a critical building block of a post-scarcity economy, a staple of science-fictional utopias where all material needs can be supplied so cheaply and easily that no one needs to work. Combine infinite energy with 3D printing or some other means of automated manufacturing, and you’re most of the way there. (Iain M. Banks’ Culture series is an example of a post-scarcity society; so is Star Trek‘s Federation.)

Like locomotives on converging railroad tracks, Rand’s principles become more likely to collide with each other the longer they play out. Her capitalists talk constantly about making their lives easier and easier through invention, about reclaiming time and energy they otherwise would have spent on labor. At the same time, they extol productive work as the only purpose in life and money as the only true measure of value. Yet in a true post-scarcity economy, money would be meaningless. Nothing has monetary value if it can be produced for free. For the same reason, work in such a society would only be a kind of hobby, something people choose to do for personal fulfillment, not because they need to in order to survive.

Ironically, this is much more like the vision of Rand’s villains – a world where money is irrelevant, all people are basically equal, and society is free to focus on intangible needs like love and happiness. Rand’s heroes regard that as an obscenity. Yet, at the same time, they’re working as hard as they can to bring it into being – and they even believe they’re sticking it to the bad guys by doing so. Of these two sides, then, who’s really outwitted whom?