Secular Students Week 2015: How to Win at Activism 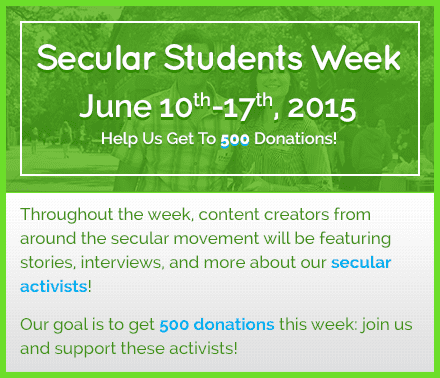 It’s Secular Students Week, when we old folk interview the next generation of secular activists and share stories of the fantastic work that they’re doing. The Secular Student Alliance has a goal to get 500 donations this week, and if they reach this goal, they’ll unlock a $20,000 challenge grant! Donate and help them reach their goal here.

For this post, I spoke to Sarah McCarter of the Students for Free-thought at the University of Michigan-Flint, whom you may remember from my column in the Guardian in March about secular student groups doing exemplary social-justice work. Sarah and her group collaborated to answer my questions about what successful activism takes:

1. Your group has held events touching on a broad spectrum of social-justice issues: climate change, death with dignity, racial profiling, sexual assault. Is there one event in particular that you’re proudest of?

The event that attracted the most attendance was the Sexual Assault Speak Out. This is definitely the event I am proudest of. The idea was inspired from the Speak Out on UM-Ann Arbor’s campus. I drove to Ann Arbor to meet with the coordinators of this event to make sure we thought of everything. We needed support for survivors, protection to ensure a confidential environment, and information from all available resources in our community. This meant coordinating with lots of different departments… the Women’s Educational Center, CAPs office, Public Safety, Student Affairs, Student Government, YMCA of Greater Flint, and Student Involvement and Life.

Our members worked hard to get the word out to fellow students. We posted flyers, made announcements in classes, attended meetings, talked to different departments, and tabled. I spent so much time worrying about every little detail. This type of event is delicate and had never been done before at our university. It would not have been possible without the drive from students to make it happen and all the support we received from resources on campus.

2. Do all these different activities make your job as an organizer harder, because of the different kinds of expertise required for each one and the possibility of people who hold some of these opinions but not others? Or does it make things easier by giving your group something to offer to a broader diversity of people? What advice would you give other student groups who want to broaden the range of their activism?

It is a double edged sword. This makes the job of an organizer more difficult because there is a limited number of members and resources so it is challenging to focus on multiple topics. I would never dream of having an event I had not thoroughly researched and had time to put energy into.

However, it also makes the group more diverse and appealing to a greater number of students which leads to increased membership. By focusing on more issues, the group can expand and more thoroughly address a wider range of topics. Our group was a lot smaller when we had a narrower focus.

Finally, because we address multiple topics, there is certainly a “risk” of the group being divided. Our Death with Dignity discussion, for example, was lively and filled with a wide variety of opinions. However, the group did not take an official position, besides perhaps to say that states should consider adopting a law similar to the Oregon Death with Dignity Act. Disagreements are truly a positive aspect of addressing many topics. How boring to sit in a room where everyone agrees! We may as well talk about the weather. To other secular groups, we would advise you to ask your members what topics interest them. For ideas, look to groups like the American Humanist Association to see what topics they address. Start with dialogues, in which students present their research on a specific topic. Then, if there are issues that you can see that the group needs to really get out there and address and take a firm position on, such as racism, then be brave and go out there and do it.

3. What would you say to atheist groups who say that they only have the time and resources to address “traditional” atheist issues like separation of church and state?

I would ask you why you believe in the Separation of Church and State in the first place. Does this mean you believe in the freedom of religion? If so, then you should be motivated to fight against profiling and bigotry against Muslims. Do you believe that a theocracy infringes on the rights of Americans? If so, then you should be standing up and declaring loudly that you support marriage equality and the right to abortion and birth control. What is the point of supporting the Separation of Church and State, or other traditional secular values, if you don’t also support the logical implications of your own beliefs?

4. What’s the number one thing that us non-students should be doing to help out the secular student movement?

Funding can be hard to come by, but is important. Secular students would like to travel to conferences and museums. Non-students could lend financial support. Furthermore, many non-students have their own areas of expertise. Secular groups are always looking for speakers. We once had a local neurosurgeon give a lecture on healthcare in the United States. That was an amazing event! If you know something, share your knowledge! It all starts with an email.

5. Where do you see the atheist community heading in the next few years?

I see the atheist community’s diversity increasing. I would like to see more inclusiveness towards marginalized groups like the LGBT community, African Americans, people from Islamic backgrounds, etc. Also, as the openly secular population grows, I hope to see the sense of community among groups like Students for Free-thought prosper.

June 14, 2015 Atlas Shrugged: Ayn Rand on Mike Wallace
Recent Comments
0 | Leave a Comment
"they avowed their certainty that Jesus would bring her back to life:Despite this not being ..."
Bob Seidensticker The Strange Sad Story of Olive ..."
"...currently every single link in the "Trending at Patheos Nonreligious" is to a "I'm moving ..."
OverlappingMagisteria Announcing: OnlySky
"I've already signed up on Jonathan Pearce's site. Looking forward to the new digs."
ORAXX Announcing: OnlySky
"Interesting. Although if Andrew Hall is coming along, I hope the new site will make ..."
bificommander Announcing: OnlySky
Browse Our Archives
get the latest updates from
Daylight Atheism
and the Patheos
Nonreligious
Channel
POPULAR AT PATHEOS Nonreligious
1