In retrospect, the coming of marriage equality to America may well be the high-water mark of religious influence. This was the one social change that Christians fought against harder than any other, and they still failed to stop it. It’s not a stretch to conclude that this will irreversibly taint their moral credibility in the eyes of future generations, even if they come to terms with it – and there’s precious little evidence that they have any intention of doing that.

Even before this decision, some Christians recognized that the tide of the culture war was turning against them and that they needed a fallback plan. In 2013, Rod Dreher proposed what he called the “Benedict Option“, named after the father of Christian monasticism, which he defined as Christians withdrawing from wider society into their own, insular communities. In the wake of Obergefell, calls to take this path have unsurprisingly grown louder, although Dreher himself admits he’s not sure exactly what the Benedict Option means or what it would look like in practice.

That vagueness notwithstanding, the Benedict Option is basically the Christian version of the macho survivalists who imagine themselves holed up in their bunkers to wait out the collapse of society. And just like those survivalists, it’s more a comforting fantasy than something that more than a tiny handful of people would ever actually do. I think it’s obvious how believers are really going to respond to their fading influence, and I think we’re already seeing it play out.

In 2009, a variety of conservative Catholic, Orthodox and evangelical Christians issued the so-called Manhattan Declaration, a defiant pledge to engage in civil disobedience against any law that transgressed their “religious conscience”. While the Manhattan Declaration pays lip service to the idea of helping the poor or ending oppression as religious duties, the two causes it treats as paramount are, of course, banning abortion and ending gay marriage.

This blustery, boastful rhetoric was widely mocked, as freethinkers pointed out that it’s impossible to engage in civil disobedience against a law that doesn’t affect you (the famous “Bakers and Florists of Conscience” notwithstanding). However, with some hindsight, it’s obvious what they meant. What they really want is what we might call “third-party religious liberty”: the right to force your religious beliefs on others, even if wider society doesn’t cooperate; the power for believers to create a bubble of private law around themselves that encompasses anyone they come in contact with.

Even before Obergefell, we were seeing this, in the form of absurd arguments along the lines of, “It violates my religious freedom for you to do something I disapprove of!” That was the guiding principle in frivolous lawsuits against evolution and LGBT rights, as well as pharmacists refusing to fill prescriptions for birth control, or clerks and registrars refusing to issue marriage licenses for same-sex couples even in states where it was legal.

But what we might call the Manhattan Option was tremendously accelerated by the Hobby Lobby decision, which granted private employers the right to control their employees’ access to health care, especially contraception. This ruling reinvigorated the religious right and turned a long-shot legal strategy into a full-blown assault on anti-discrimination and equal-access laws of all kinds.

There’s also the expansion of ministerial exemptions in Hosanna-Tabor, which threw the door wide open for religious schools to insert onerous “morality clauses” allowing them to expel students or fire teachers who, say, attend a friend’s same-sex wedding or express pro-choice views on a private Facebook page.

The essence of the Manhattan Option is the parochial view that the world revolves around me, and that I should never have to see, hear about, or interact with people doing things that I disagree with. Rather than a retreat, like the Benedict Option supposedly is, it’s an advance, coupled with the belligerent demand that I should be able to treat others however I choose and that my views should prevail whenever there’s a clash of opinions. If the Supreme Court hadn’t blessed this strategy, it would have withered on the vine. As it is, it’s a power we can expect to see religious institutions lean on much more heavily in the future, and they’ll no doubt seek other ways to expand it. 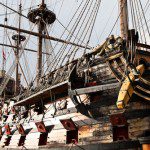 July 24, 2015 Atlas Shrugged: The Jolly Roger
Recent Comments
0 | Leave a Comment
Browse Our Archives
get the latest updates from
Daylight Atheism
and the Patheos
Nonreligious
Channel
POPULAR AT PATHEOS Nonreligious
1