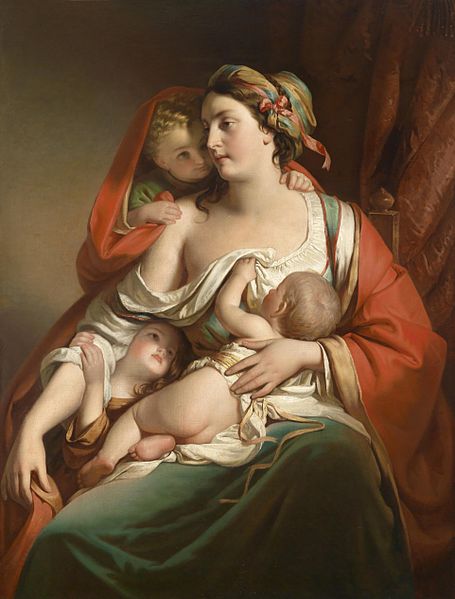 I’ve mentioned the missing women of Atlas Shrugged, but there’s another omission that’s even bigger. Although the men far outnumber the women, we have Dagny as a main character, plus there are a few other women to provide representation, unequal as it is. However, there’s a hole that has no such compensation: the almost total absence of children.

Despite all the sex in Atlas – Dagny has long-term sexual relationships with Francisco, Hank, and later John Galt – the possibility of pregnancy is never even acknowledged. To judge from this book, you’d think that the only thing sex is good for is showing someone how much you admire their money-making abilities. There are a few brief flashbacks of the main characters as children, but they’re never child-like. They’re just miniature adults, with all the same desires and personality traits as their grown-up selves.

I don’t think this was a purely accidental omission. It’s very hard to imagine how children and child-raising could fit into an Objectivist world. In the whole book, there’s only one brief scene that hints at Rand’s views on parenting, and it’s in this chapter:

The recaptured sense of her own childhood kept coming back to her whenever she met the two sons of the young woman who owned the bakery shop. She often saw them wandering down the trails of the valley — two fearless beings, aged seven and four…. The two boys had the open, joyous, friendly confidence of kittens who do not expect to get hurt, they had an innocently natural, non-boastful sense of their own value and as innocent a trust in any stranger’s ability to recognize it, they had the eager curiosity that would venture anywhere with the certainty that life held nothing unworthy of or closed to discovery…

“They represent my particular career, Miss Taggart,” said the young mother in answer to her comment, wrapping a loaf of fresh bread and smiling at her across the counter. “They’re the profession I’ve chosen to practice, which, in spite of all the guff about motherhood, one can’t practice successfully in the outer world. I believe you’ve met my husband, he’s the teacher of economics who works as linesman for Dick McNamara. You know, of course, that there can be no collective commitments in this valley and that families or relatives are not allowed to come here, unless each person takes the striker’s oath by his own independent conviction. I came here, not merely for the sake of my husband’s profession, but for the sake of my own. I came here in order to bring up my sons as human beings.”

Objectivist economics is built on the bedrock of trading value for value. I grow wheat, which I trade to you in exchange for the oil you drill, so you can make bread and I can run my tractor. How does parenthood fit into that equation? What value does this woman create from the work of raising children that she can trade to others for the products of their labor? Does she rent them out as hired help? Rand may have been all in favor of child labor, but it’s hard to imagine that even she would have advocated employing a four-year-old as a domestic servant.

The other possibility is that women can hold a second job to support their parental ambitions, which may be why this woman runs a bakery. But it’s hard to see how anyone could fit in a family around the grueling hours that Rand expects people to work as a matter of course (Dagny works on major holidays and routinely sleeps at her desk, Hank is no stranger to working 18-hour days for months on end, Ken Danagger never takes a day off in forty years, and so on and so on). It’s no coincidence that all her main characters are single or childless. And of course, there’s no maternity leave or other protections in Randworld, so there’d be nothing to stop an employer from firing a worker as soon as she gets pregnant – a chronic problem for women at all income levels.

The absence of children isn’t a problem for a novel’s frozen-in-time setting. But realistically, John Galt, Hank Rearden, Francisco d’Anconia, and all those other heroic capitalists would eventually get old and die, and what happens then? Who would complete the project of rebuilding the world? No individual has a responsibility to procreate, but whatever your life philosophy is, if it scorns the idea of child-bearing and parenting, it’s setting itself up for extinction.

There’s another contradiction which the text awkwardly stumbles over. As the mother points out, no one is allowed in Galt’s Gulch just because of family ties; they have to commit to join the strike of their own free will. But children obviously couldn’t do that. They don’t fit into the idealized model of humans as perfectly free, perfectly rational beings. Is there a Randian “age of accountability”? I can imagine parents in the valley dreading the day when John Galt knocks on their door and tells their children, “It’s time, kids! Today’s the day you either have to swear to join the strike, or else get thrown out into the outside world to starve in a vortex of misery and chaos, never to see your parents again. Remember, say it like you mean it!”

Rand doesn’t dwell on any of this, because Objectivism, like most varieties of libertarian philosophy, has a very hard time explaining why anyone would choose to have a family. Carrying, birthing and raising children is an intrinsically altruistic endeavor. We endure the dangers and indignities of pregnancy; we shelter and provide for these small, helpless beings; we wait on them hand and foot for years, pouring untold labor into the task, often sacrificing our other goals and even our health, in exchange for… what? What do parents get out of this? What value do children provide that Objectivism can take cognizance of?

In traditional societies, there’s an implicit social contract that parents raise children, and the children return the favor by caring for their parents in their old age. But Rand doesn’t share that view. As we’ve seen in the chapters where Hank Rearden abuses and berates his family, she’s dead-set against the idea that people have any obligation whatsoever to their family members. And as many a parent knows, there’s no guarantee that your children will repay your efforts or even be grateful for them.

Furthermore, what obligation do parents have to provide for their children? It’s widely recognized that parents do have such an obligation, but Rand never says if she agrees with that, or how she justifies it if so. She states that “a man has the right to support his life by his own work“, but that no one has any obligation to supply anyone else’s needs. Taken literally, this would imply that parents have the right to abandon their children any time they feel like it, even if they’re infants or toddlers.

Again, while it’s hard to believe she intended her words to be read that way, there’s no evidence to contradict that interpretation. This was a blind spot that she seemingly never noticed. The Ayn Rand Lexicon (“Objectivism from A to Z”) has no entry for “children”, “parenting” or “family”, and even the entry on sex makes no mention of pregnancy or childbirth. Rand herself had no children, so this is one instance where she lived out her own philosophy.

And yet, her steadfast avoidance may have been the best response. Other libertarians have contemplated this problem more deeply than Rand did, and some of them have come up with comically horrifying solutions. One of them, Murray Rothbard, declared that his libertarian utopia would have “a flourishing free market in children“, so parents could auction the offspring that no longer gave them selfish pleasure. In that same essay, Rothbard points out that his philosophy only outlaws initiation of force, so while you can’t beat your children, it’s perfectly OK to let them starve to death. Nor was this view a one-off aberration: Bill Evers, an advisor to the McCain presidential campaign, argued the same. Considering views like these, it’s a relief that children have so little presence in Atlas Shrugged. The alternative could be so much worse.

September 21, 2015 The Graying of the Priesthood, Continued
Recent Comments
0 | Leave a Comment
Browse Our Archives
get the latest from
Daylight Atheism
Sign up for our newsletter
POPULAR AT PATHEOS Nonreligious
1