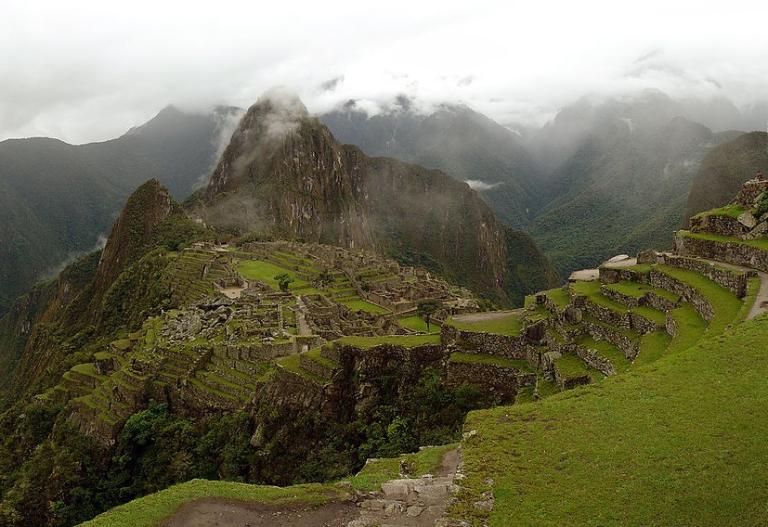 Summary: Like a watcher of the skies when a new planet swims into his ken.

It’s a common belief that, when Europeans first encountered them, the Native Americans were living a hunter-gatherer lifestyle scarcely changed from that of the earliest humans. This idea spans the political spectrum: from those on the left, who idealize indigenous people as living a purer, simpler life in harmony with nature, to those on the right, like Ayn Rand, who called them “savages” and cheered colonial settlers for “bring[ing] the element of civilization” to the New World.

In all its variations, this idea isn’t just wrong but spectacularly so, according to Charles C. Mann’s 1491: New Revelations of the Americas Before Columbus. After seeing an excerpt, I had to track down the whole book. Reading it was dizzying, like seeing clouds part to reveal a vast, brand-new world of humanity I’d never known existed. As Mann says:

[T]he Western Hemisphere before 1492 [was]… a thriving, stunningly diverse place, a tumult of languages, trade, and culture, a region where tens of millions of people loved and hated and worshipped as people do everywhere. Much of this world vanished after Columbus, swept away by disease and subjugation. So thorough was the erasure that within a few generations neither conqueror nor conquered knew that this world had existed. [p.30]

Obviously, there were always counterexamples to the Indians-as-primitives* view. Great ruined cities like Chichén Itzá and Machu Picchu show that something was going on in the Western Hemisphere. But until recently, researchers and textbooks dismissed these as late, isolated exceptions. The consensus view was that, by and large, the pre-contact Americas were a lightly populated wilderness where “both the people and the land had no real history” and “floated changelessly through the millennia” [p.9].

The reality, according to new research, is that the Western Hemisphere was spanned by mighty civilizations: “Columbus set foot in a hemisphere thoroughly dominated by humankind” [p.4]. Giovanni de Verrazzano, a sixteenth-century Italian explorer, found that the American coast was so densely populated that the smoke from Indian bonfires could be smelled for hundreds of miles; and Samuel de Champlain, who visited Cape Cod in 1606, gave up on settlement because too many people already lived there [p.52]. Even fairly conservative scholars now estimate the pre-contact population of the Americas in numbers that would have struck their precursors as outrageously enormous. By some of the higher estimates, there were between 90 and 100 million people there, or in other words, when the hemispheres made contact, the Americas had more people than Europe.

Far from being primitives, the Indians altered the landscape on a grand scale to suit their needs. They cleared and sculpted forests with fire, reworked huge swaths of land for agriculture, changed the course of rivers, built canals and reservoirs. They had massive cities, well-organized states with armies and kings, monumental public works, huge road systems, vast trade networks, sophisticated calendars and chronologies. They correctly calculated the length of the year and independently invented the concept of zero [p.21]. They domesticated corn, turning the wild grass teosinte into the huge, juicy, sweet cobs of maize, still the greatest feat of genetic engineering ever performed by humans. Most explosively, Mann cites evidence suggesting that the Amazon rainforest itself is a human creation, descended from Indian orchards that reverted to wild state. He calls this “agro-forestry, farming with trees, unlike any kind of agriculture in Europe, Africa, or Asia” [p.29].

Tenochtitlan, capitol of the Triple Alliance (the Mesoamerican empire usually called the Aztec) was bigger and busier than Paris, with botanical gardens, great temples and boulevards, aqueducts and canals, and artificial islands. The Tawantinsuyu (Inca), in their heyday, ruled the biggest and best-organized empire in the world, spanning the entire western coast of South America. The Maya and the Olmec were a ferment of politics, alliances, wars and Shakespearian palace intrigues. In the Mississippi valley, the city of Cahokia near modern-day St. Louis was the apex of a stratified culture that built earthen mounds bigger than the Great Pyramid of Giza. And those are just the best-known: archaeologists are still finding hints of whole civilizations we know practically nothing about.

Indigenous civilizations weren’t just big and sophisticated, but ancient. The question of when humans reached the Americas is a white-hot debate in anthropology. But recent evidence suggests that the earliest known societies that arose there, the Norte Chico culture in Peru and the Mesoamerican polities, deserve to be ranked as two of the first cradles of human civilization, together with the Nile valley, the Fertile Crescent, the Indus River and the Yellow River. The Norte Chico people in particular were building cities and temples as early as 3500 BCE, as old as the oldest cities of Sumer – and unlike the others, which arose in fertile river valleys, they did it in one of the most arid and inhospitable places on Earth, the rainshadow of the Andes.

If Indian culture was this widespread and this sophisticated, how could it have disappeared so completely and with so little trace? Mann’s answer, which is where the book dips into the most familiar territory, is that it was imported European germs that wreaked the most harm. Zoonotic diseases like smallpox, typhus, measles and influenza, against which indigenous people had no innate resistance, swept across the continent in a holocaust. Following native trade routes, they outpaced the colonizers who brought them, shattering empires and leaving great cities to crumble and revert to wilderness. By the time Europeans made it into the interior of the continent, they thought there had never been anyone there. (A few Europeans did notice the destruction, but were happy to ascribe it to a benevolent deity clearing the way for them.)

This is a grim irony. Despite all the greed and cruelty of the colonizers, the worst harm they committed was entirely by accident. It’s not even clear if this outcome could have been prevented, even if Europeans had come with the best intentions in the world, without a far more sophisticated understanding of disease than either side possessed.

For all their achievements, one thing that Indian cultures mostly didn’t have was writing, and so they died, in a sense, voicelessly. We have almost no records from their perspective of what must have been an apocalyptic catastrophe. We know so little about how they lived, how they thought, and how they saw the world. It’s only now that we’ve begun to piece the evidence together into even a sketch of their vanished glory, and to get a glimpse of how staggering was the magnitude of the loss.

None of this is to say that the Indians were wiser or morally better, necessarily, than Europeans. They had loving families, wise leaders, poetic dreamers, curious inventors and thinkers, brave explorers; they also had brutal rulers, bloody coups, bitter rivalries, wars of conquest, human sacrifice, extravagant cruelty. They were (and are) human beings, the same as any other human beings, with the same potential and the same right to exist. Our civilization is built where theirs once thrived, and had theirs survived, it’s impossible not to wonder what a dramatically different world we’d live in today.

* Nomenclature is a perpetual debate, but much to my surprise, Mann says that the vast majority of native people he interviewed prefer the term “Indian” to “Native American”.

September 30, 2015 Blood Moon Lunacy, or the Virtue of Vagueness
Recent Comments
0 | Leave a Comment
Browse Our Archives
get the latest from
Nonreligious
Sign up for our newsletter
POPULAR AT PATHEOS Nonreligious
1