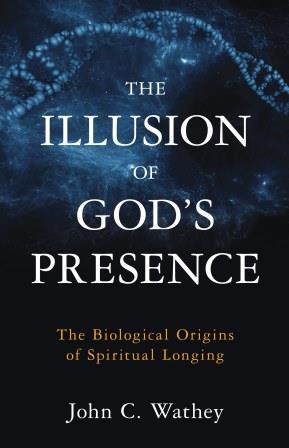 Summary: Not a new theory, but a new and strong case for an old theory, supplemented with up-to-date neurological evidence.

Jack Wathey is a neuroscientist and computational biologist and the founder of Wathey Research, a scientific firm that focuses on problems like protein folding. His new book, The Illusion of God’s Presence, presents an answer to a puzzling problem: Why do human beings believe so strongly in a supernatural deity, even in the face of ample contradictory evidence? (Full disclosure: Jack and I have been correspondents for several years, and I sent him feedback on an earlier draft of the manuscript. It also cites my writing as reference material in a few places.)

The book begins with a gutsy personal anecdote in which the author, with painful honesty, describes the worst mistake he ever made – a family hiking trip in the Sonoran desert of southern California, which almost turned deadly when midday temperatures soared and they hadn’t brought enough water. Although no one died, he was tormented by guilt and thoughts of what he should have done differently. It was while grappling with his guilt that night that he was unexpectedly visited by the overwhelming sensation of a loving, forgiving presence in the room with him – despite the fact that he was and still is an atheist. It was “a religious experience devoid of religious belief”, as he puts it.

Wathey reflected on this experience after the emergence of the New Atheist movement. He writes that he found the books of prominent atheist authors “rousing and delightful”, but that they neglected “the real reason that most believers believe: their personal experience of the presence of God” [p.16]. It’s this subjective and highly emotional sensation, the same one he experienced for himself, that he believes lies at the root of most religious belief, and that this book seeks to explain in scientific terms.

His theory – the illusion of the title – is that belief in God is a misfire of the brain systems that evolved to promote parent-child bonding in infancy. A baby instinctively believes, without needing any prior experience, that its crying will summon a powerful, loving parental figure. Wathey calls this instinct “short-circuit certainty” and says:

“Even if she cannot be immediately seen, heard, tasted, or felt, the mother still exists. Even if she takes what seems an eternity to respond to the infant’s cries, she still exists. This knowledge would give an infant separated from its mother the persistence to keep crying for her, even if hunger and exhaustion would otherwise compel silence and rest to conserve energy. This hardwired, innate sense of certainty of the mother’s existence is, by definition, certainty in the absence of evidence. The infant is certain because certainty confers a survival advantage.” [p.63]

Wathey’s proposal is that in times of great despair, anguish or helplessness, this deeply buried neural network sometimes reactivates, giving a person the unshakable sense of a powerful and benevolent presence that’s willing to give aid or comfort. Effectively, belief in God is a supernormal stimulus for the innate parental image which all humans inherit.

This isn’t a new idea, of course. Sigmund Freud proposed something similar, that religious belief grows from an unconscious longing for a childhood father figure. But where Freud was groping in the dark, Wathey backs his argument up with modern neuroscientific evidence, identifying the specific brain regions and networks that he believes give rise to this phenomenon. If you, like me, have a geeky fascination with how the brain gives rise to the mind, there’s a lot of material here to mull over: the role of nucleus accumbens in mediating reward-seeking behavior, cholinergic signaling in the basal forebrain, the top-down role of the visual cortex in sensory perception, and more. He surveys comparably complex neural programming in other species, like newly-hatched sea turtles which have sophisticated instincts that govern when to emerge from their nest, how to seek out the ocean, and how to tell which direction they should swim. He also devotes considerable time to infant cognition and what patient, careful experimentation has shown us about the way babies perceive the world.

There are probably a few questions that come to mind when you consider this hypothesis. I had them myself on my first reading of the book: Given that the parental caregiver is usually the mother, why isn’t God more widely believed to be female? Isn’t it maladaptive for this brain network to confer the sense that the supplicant’s prayers have been answered, whereas an infant is only soothed by the actual presence of its parent and not merely the wish? Why do so many religions believe in a God who’s a cruel, punishing lawgiver rather than a comforting maternal figure?

Wathey addresses those objections and others in the book, and I’m not going to go into detail about his answers in this review. Instead, I want to touch on what I thought was a very clever and unexpectedly persuasive argument: in addition to the neurological evidence, he describes “infantile imagery” in a wide variety of religions and cults: texts and rituals that, implicitly or explicitly, tell believers to picture themselves in an infantile role and God as a loving parent.

Sometimes, this infantile imagery merely consists of stressing the believer’s total helplessness and dependence and God’s omniscient willingness to aid. But sometimes the connection is unambiguous, as in prayer manuals which compare believers in prayer to a helpless baby nursing at a breast, or doctrine which instructs believers that they must be “born again”. (One tidbit I learned is that Jim Jones demanded his followers address him as “Dad”.) He also points out that prayer often involves rhythmic rocking or swaying, which parents know has a calming effect on small children. The first time I read this, I thought of devout Jews rocking back and forth in fervent prayer at the Wailing Wall.

The other thing I liked about the book is that Wathey demonstrates the explanatory fruitfulness of his theory. He argues that it can explain a diversity of questions under the same banner: why nearly all religions are obsessed with sexual proscription and taboos, or why denial of God consistently attracts such anger, or why prayer so often involves kneeling and prostration, or even why churches and temples have common architectural motifs. He does venture into speculation that the greater religiosity of women is partly biological, which I suspect will attract some opposition. But overall, when it comes to secular works on the origins of religious belief, this is a thoughtful and worthwhile contribution and a persuasive case for atheism.

The Illusion of God’s Presence is published by Prometheus Books and available online through major retailers. You can also listen to an interview with the author on Point of Inquiry.

January 11, 2016
Jimmy Carter Is Better than the God He Worships
Next Post

January 15, 2016 Atlas Shrugged: The Descent of Man
Recent Comments
0 | Leave a Comment
Browse Our Archives
get the latest from
Daylight Atheism
Sign up for our newsletter
POPULAR AT PATHEOS Nonreligious
1