The Life and Death of Antonin Scalia 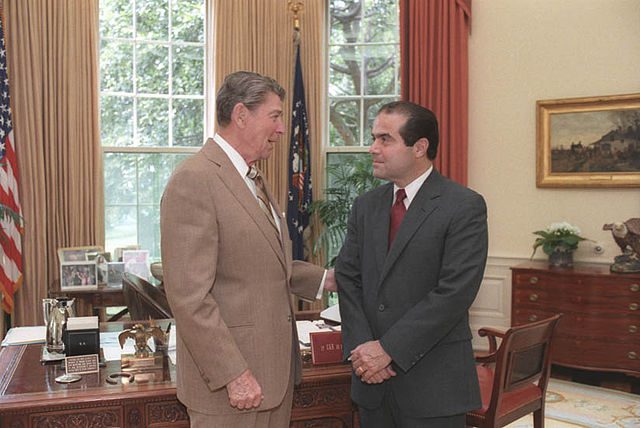 Antonin Scalia has died. The news broke on Saturday night while I was at the movies watching Deadpool (seriously). It was such a sudden and unexpected shock, such a bolt from the clear blue, that at first I had trouble believing it was for real. It brought irresistibly to mind Clarence Darrow’s quip that while he’s never wished anyone harm, “I have read some obituary notices with great satisfaction.”

I don’t mean to be crass, but I also think it’s a nonsensical tradition to never speak ill of the dead. If you can criticize someone while they’re alive, you should just as well be able to criticize them when they’re deceased.

And Scalia’s record left plenty to criticize him for. As FFRF points out, he believed that the Constitution allows the government to favor and promote religion, enshrining de jure prejudice against atheists. He was virulently homophobic, to the point of supporting criminalization of same-sex relationships. He repeatedly called for Roe v. Wade to be overturned and said it shouldn’t even be recognized as precedent. He very nearly succeeded in ripping healthcare away from millions of Americans. Far from being a faithful “originalist”, he was flagrantly self-contradictory about the scope of federal power, depending on whether it was a Republican president asserting it. And, of course, there was Bush v. Gore.

Besides, by appointing federal judges and Supreme Court justices to lifetime terms, we’ve crafted a system where progress is perversely dependent on people dying. With this power, a president can control the political process decades after he’s left office. Scalia was appointed by Ronald Reagan – he’s been on the Supreme Court since 1986, almost my entire life – and he passed away at 79, which in this era isn’t necessarily old age. He could easily have lived another ten years, perhaps even another twenty. Would anyone claim that the America of Reagan’s day looks so much like the America of today that the same people should be making policy for both?

I’d be happy with a policy that allowed federal judges and justices to serve a single, fixed term – say, ten or twelve or fifteen years. This would allow natural turnover so that the court system more closely tracks the evolution of democratic consensus. It would remove the perverse incentive for partisans of each party to root for the deaths of people from the other. It would also lessen the incentive for partisans to try to cover up dementia or other incapacity of judges from their own side.

Regardless, this is a tectonic shift in American politics: a Democratic president has an opportunity to replace one of the court’s most conservative justices. Predictably, Senate Republicans immediately blustered that they’ll block anyone Obama nominates, invoking a made-up-on-the-spot rule that the president shouldn’t get to be president during his final year in office. (Seriously, he has almost one-quarter of his second term left to serve.) Ted Cruz went so far as to claim that we “owe it” to Scalia’s memory to not appoint a replacement until after the election, even though, as Ophelia Benson has written, it’s not the “Scalia Memorial Seat”.

But this fight isn’t to the GOP’s advantage, especially since they gave the game away by announcing they wouldn’t even look at the nominee’s qualifications. That kind of naked obstructionism is going to put intense pressure on them between now and November, especially on Republicans running for reelection in blue states, and I wouldn’t be surprised if they cave. As a compromise, Obama might have to name someone more moderate than I’d prefer, but given who they’d be replacing, it’s still a huge win.

Besides, even leaving the seat vacant isn’t necessarily good for Republicans. If the Supreme Court divides 4-4, the lower court decision stands. And there are some extremely consequential cases this term – the Paris climate plan, public-sector unions, redistricting, and more – where letting the appeals court decision stand would be perfectly acceptable to progressives. One big exception is a case where a conservative appeals court effectively allowed the state of Texas to outlaw abortion. But we always faced long odds at the Supreme Court over that one, and Scalia’s absence doesn’t make the situation any worse.

The most appropriate tribute I can pay to Scalia – and ironically, I’m sure it’s a tribute he’d have appreciated – is that he held back American progress as long as he could. He exemplified the conservative cliche about standing in the breach of history and yelling “Stop!” Near the end of his life, his opinions started getting more blustery and belligerent, as if he saw change arriving in spite of him. That frozen river may stay locked up in ice for a long season, but when the spring thaw comes, no one in the world can hold it back.

February 17, 2016 The Inglorious End of the Oregon Occupation
Recent Comments
0 | Leave a Comment
Browse Our Archives
Follow Us!