Some Right-Wing Christians Enthusiastically Promoting a Form of Genocide 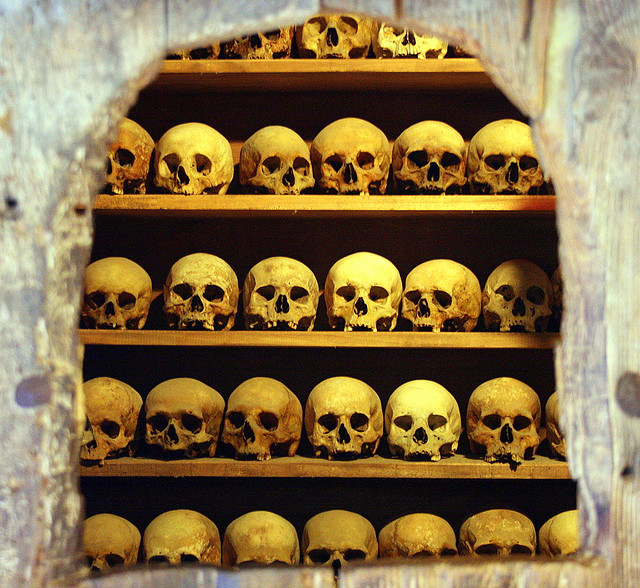 This article originally appeared on AlterNet.

In 2014, Charisma magazine, a major media outlet for evangelical and Pentecostal Christians, published an open call to genocide. The article in question, titled “Why I Am Absolutely Islamaphobic” [sic] and written by Gary Cass, begins with the premise that “every true follower of Mohammed” wants to “subjugate and murder” non-Muslims, and therefore it’s impossible for Christians to live together peacefully with them.

Cass proposes three solutions to this problem. One is for Muslims to undergo mass conversion to Christianity; the other is mass deportation combined with eugenics – either “force them all to get sterilized” or kick them out of America “like Spain was forced to do when they deported the Muslim Moors”. But he says both of these plans are unlikely to work, so “really there’s only one” solution, which is:

Notice Cass’ statement that war has been “shown to work” by “1,400 years of history”. The only thing he could be referring to is the Crusades (presumbly beginning with the Spanish Reconquista, around 700 AD), which often entailed the massacre of civilians in captured areas. Most of us know the Crusades as a bloody and barbaric era in our history and think that a repeat is something to be avoided at all costs, but Cass is openly cheering the idea.

“Overwhelming self defense” is another bizarre and disturbing contradiction in terms. By definition, anything more than the minimum amount of force to stop an imminent threat isn’t self-defense. The idea that self-defense requires waging “overwhelming war” on entire populations, rather than against specific aggressors, is the hallmark of paranoid and racist fantasies which believe civilization is under threat by “the other” and must be protected at all costs.

Like many deluded, macho wannabe crusaders, he fantasizes about the collapse of society, urging his readers to buy guns and form militias:

First trust in God, then obtain a gun(s), learn to shoot, teach your kids the Christian doctrines of just war and self defense, create small cells of family and friends that you can rely on if some thing catastrophic happens and civil society suddenly melts down.

Finally, he closes with a bloodcurdling statement that can only reasonably be interpreted as a call for genocide against Muslims:

Now the only question is how many more dead bodies will have to pile up at home and abroad before we crush the vicious seed of Ishmael in Jesus’ Name? …May we be willing to take the lesser pains now so our children won’t have to take greater pains later.

Notice, again, that he envisions “pil[ing] up” dead bodies, and not just “abroad”, but also “at home”. Most assuredly, the irony of this escapes Cass, but he himself is advocating exactly the same thing as what he accuses his enemies of wanting. He wants to subjugate or kill Muslims (with either mandatory sterilization and deportation, or “overwhelming war”). Most chilling, he calls this the “lesser pains” and says it’s necessary so that we won’t have to take even more drastic actions later.

After facing a storm of criticism from both Christians and atheists, Charisma pulled Cass’ article down. But there’s no explanation, no retraction, no apology; the original link now just goes to a 404 error page. Rather than reflect on what that led them to consider this piece reasonable to publish in the first place, or acknowledge they were wrong to run it and say what they’ll do differently in the future, they chose to flush it down the memory hole, to try to pretend it never happened. (It’s still available at its author’s personal website, where it’s prefaced with a banner that reads “Why We Cannot Coexist” – further proof that he’s advocating violence against Muslims in general and not merely those who commit acts of terrorism).

Cass is by no means the first or the only Christian to defend genocide. Phil Robertson (star of the reality TV show Duck Dynasty) appeared on Sean Hannity’s show recently to argue that we should either “convert them or kill them“, referring to ISIS. Ironically, this is exactly the choice that ISIS offers to religious minorities under their dominion – either convert to their brand of Islam or die. Robertson, like Cass, is the mirror image of the radical theology he claims to despise.

The roots of this genocidal mindset come from the Bible itself. In the Old Testament, after the Israelites escape from Egypt, they arrive at the promised land only to find that it’s already populated by the Canaanites and other pagan peoples. What follows, according to the biblical book of Joshua, is a campaign of slaughter in which God instructs his people to invade and massacre everyone already living there:

And, according to the Bible, God’s people did as they were instructed:

“And that day Joshua took Makkedah, and smote it with the edge of the sword, and the king thereof he utterly destroyed, them, and all the souls that were therein; he let none remain…

So Joshua smote all the country of the hills, and of the south, and of the vale, and of the springs, and all their kings: he left none remaining, but utterly destroyed all that breathed, as the Lord God of Israel commanded.” —Joshua 10

Prominent Christian apologists such as William Lane Craig have defended these ghastly verses, arguing that if God commands you to do it, you’re justified in committing any act of violence, up to and including the slaughter of helpless men, women and children. (In fact, Craig argues that the most morally troubling part of this is the psychological toll that would have been inflicted on the Israelite soldiers who were tasked with carrying out the mass execution.) As we see with Cass, this genocidal, God-is-on-our-side mindset isn’t purely a matter of ancient history, but continues to inform the beliefs and ideas of Christians today.

Of course, there’s no question that Islamic terrorism does exist. Groups like ISIS are extraordinarily violent and brutal. Moreover, they seem to take sadistic glee in broadcasting proof of their own atrocities, like the killings of journalists. But in the final accounting, they’re no more than a bunch of thugs with guns. They’re no match for America’s military. They can’t invade us, occupy us, or overthrow our government. They pose no existential threat to America or to the world. But they count on us overreacting, lashing out with disproportionate and irrational panic (which is, after all, why they’re called “terrorists” – they seek to accomplish their aims by creating terror). Meanwhile, mundane, ordinary, everyday gun violence kills more Americans every year than international terrorism ever has or ever will.

If ISIS and similar groups are a threat to anyone, they’re first and foremost a threat to other Muslims, who’ve suffered the most from their ruthless and violent quest to impose a harsh theocratic state. But, again, the starkly black-and-white worldview of American fundamentalists doesn’t allow for this kind of nuance. In their eyes, all Muslims think and believe the same way, want the same things, and are all equally and irredeemably evil. Conversely, they believe all true Christians are good and righteous by definition. Good and evil, in the worldview of both Christian and Muslim fundamentalists, has no relation to your actions; it’s solely a matter of whether you profess allegiance to the right side.

April 27, 2016 Repost: The Republican Stupid-Party Spiral Dilemma
Recent Comments
0 | Leave a Comment
Browse Our Archives
get the latest from
Nonreligious
Sign up for our newsletter
POPULAR AT PATHEOS Nonreligious
1