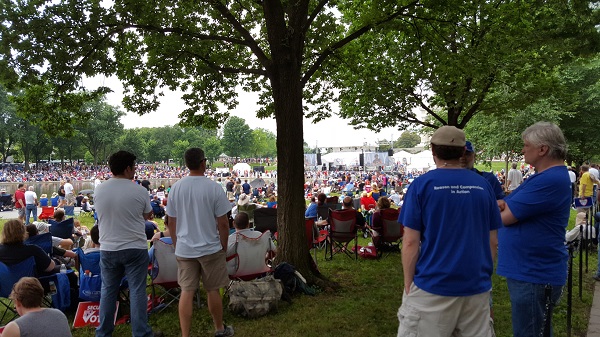 This weekend was the second Reason Rally in Washington, D.C., sequel to the original 2012 event. I was in attendance for most of the day, so here’s my report.

In 2012, it was cold and foggy with drizzling rain all day. This year, it was swelteringly hot and muggy on the National Mall, and a threatened thunderstorm never arrived. If you had enough water and a spot in the shade, it was bearable, although I’ll bet a lot of attendees came away nursing sunburns. The crowding and heat under the exhibitor tents were brutal, and I admire the devotion of the people who were tabling all day for the various secular organizations.

I’d been worried that the day would be a bust, especially since the Reason Rally organizers didn’t do as much advertising or promotion as I was expecting. But if there was a sharp dropoff in turnout from the last one, I didn’t notice. To my untrained eye, the crowds looked comparable. (The usual sneering bigots asserted that the rally’s anti-harassment policy must have kept people away, a claim with the same plausibility as a Bible-thumper blaming gay rights for earthquakes.)

One thing that was different was that there were a lot of Christian proselytizers, more so than the last time. From what I heard, most of them were sent by Ray Comfort, the ignorant-and-proud-of-it anti-evolutionist. I took some of their literature, since it’s always good for a laugh, but otherwise I didn’t bother engaging them. All I can say is, if you really think a tract of Bible verses is going to sway someone who traveled specifically to attend an atheist rally, good luck to you. Hey, it wastes their time and money and keeps them out of trouble.

I had a great time socializing with friends at the rally, as always. But I won’t deny I’m less enthusiastic than I was in 2012. It’s no secret that I’ve felt disillusioned about the atheist movement lately. We seem stuck in this one-step-forward, one-step-back pattern, where every positive move toward greater diversity or social justice is counterbalanced by yet another clueless proclamation from yet another loudly ignorant white guy.

This was evident in the selection of headliners. For every solid choice, like Maryam Namazie, Anthony Pinn, NASA’s Carolyn Porco or John de Lancie from Star Trek, there was a Bill Maher (whose anti-vaccine and anti-science views the atheist community seems determined to ignore, despite several other speakers trumpeting vaccination as a triumph of science), or a James Randi (whose admitted excusal of a speaker’s sexual misconduct is likewise something that everyone has apparently just agreed to ignore).

Still, being around so many happy, enthusiastic nonbelievers gave my spirits a charge. It reminded me that, whatever the internal disputes that divide us, the work of the atheist movement is vital and necessary. We need rights groups to defend the separation of church and state in the U.S. and around the world. We need humanists doing charity work and standing up for the downtrodden. We need people to promote reasoned nonbelief as a better alternative to faith, superstition and dogma. None of these goals are any less important even if our community is an imperfect vehicle for advancing them. (Two people I’m glad I got to meet were Noelle George, executive director of Foundation Beyond Belief, and my Patheos colleague Sincere Kirabo, who’s running the AHA’s social justice caucuses.)

Richard Dawkins wasn’t in attendance this time, since he’s recovering from a minor stroke. I think, in a way, his absence was beneficial for the rally as a whole. When he’s present, lazy journalists and religious critics can be relied upon to write about whatever he said and ignore everyone else. His absence forced the journalists in attendance to write more about what actually happened at the rally. The press coverage I’ve seen was generally sympathetic and positive.

It’s ironic that, even as the atheist movement is more divided than ever and so many good activists have burned out, our influence is at a historic height. Open nonbelief is less controversial than ever, especially among younger generations. The American religious right was dealt a stunning blow by the legalization of same-sex marriage and looks set for long-term demographic decline.

Coming out of the closet and asserting atheist pride has its purpose, but I think that, looking ahead, we can already foresee the day when nonbelief will be an accepted option that doesn’t need special defense or justification. Will we need a Reason Rally 3 in another four years? Personally, I’d be happy if the atheist movement spent a little less time and energy on staging big, star-studded public spectacles, and a little more on the harder, less glamorous work of making the movement a more welcoming place.