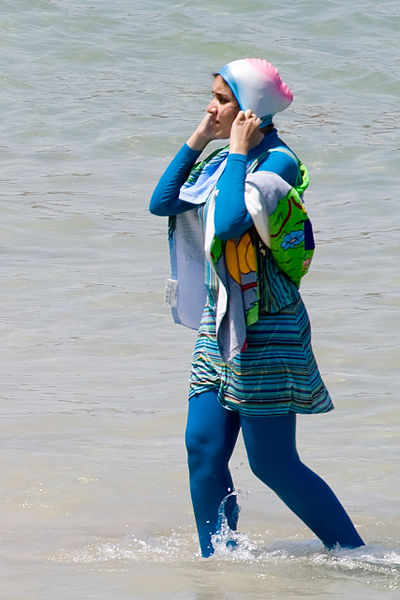 There was an ugly spectacle this week on a beach in France:

Photographs have emerged of armed French police confronting a woman on a beach and making her remove some of her clothing as part of a controversial ban on the burkini.

…Her ticket, seen by French news agency AFP, read that she was not wearing “an outfit respecting good morals and secularism”.

As a response to recent Islamist terror attacks, cities like Nice have banned clothing that “ostentatiously displays religious affiliation”. That apparently includes the burkini, a wetsuit-like garment that covers the wearer’s whole body (but not their face) and is marketed to Muslim women as more modest than other swimwear.

People can and do have different opinions on laïcité, France’s very strict form of secularism. But whatever you think of the idea, you have to concede that armed police surrounding a woman and forcing her to disrobe in public is grossly excessive and heavy-handed. It’s absurd to look at a picture like this and conclude that the woman being swarmed and intimidated by police officers is the aggressor:

Police confronted a woman on a French beach after a ban on burkinis. Are they right to force women out of burkinis? pic.twitter.com/YUd90o60zN

Making this all even more ludicrous, the deputy mayor of Nice is threatening legal action against people who take pictures of police enforcing the ban. This authoritarian behavior leaves no doubt who the villains are. It’s a shame that these cities took the wrong message from their public embarrassment, and would rather hide their actions from the eyes of the world than change their laws.

You could make a (debatable) safety argument for not allowing people to wear face-covering garments in public, but the burkini doesn’t even do that. It’s impossible to believe that a Muslim woman’s choice of bathing suit is harming anyone. It picks no one’s pocket, it breaks no one’s leg. The transparent purpose of this law is to send a message to Muslims that they’re unwanted and unwelcome. Judging by the comments from onlookers quoted in the Guardian article, we can safely say that message is being heard loud and clear:

As IHEU says, this is not my secularism. I don’t want religion woven into the fabric of the state or used as an excuse for oppression, but I also don’t want a state that takes it upon itself to bully believers on my behalf. I reject the flimsy excuses about “public order” or “preventing offense” used to justify cracking down on people’s harmless private choices. I want everyone to have the maximum freedom to do whatever they want with their own bodies.

Just to be clear, none of this is to say that I approve of facial veils or full-body swimsuits. Islam’s modesty doctrine unquestionably springs from deeply rooted religious misogyny. As with many other religions, it teaches that a woman’s only value is her body, and that it’s her responsibility to keep herself hidden away so as not to tempt men into sin. I reject these dehumanizing ideas in their entirety. I think it’s a shame that so many women have internalized these modesty doctrines and continue to abide by them, even in countries where they don’t have to.

But banning this clothing isn’t the answer. After all, if a Muslim woman sincerely believes that she can’t appear in public without wearing something like this, and you take away her right to do that, what did you accomplish? All you’ve done is ensure that she’ll feel unable to go out at all. Observant Muslim women could wind up feeling just as imprisoned as they do in actual theocracies. This doesn’t change minds or win people over, it just causes unnecessary suffering. Even if you want to change believers’ minds, one of the best ways to do that is giving them ample opportunity to meet, be around and live with people who don’t believe as they do.

We have to be careful not to take the equivalence too far. As ridiculous as France’s burkini ban is, there’s no question that millions of women living in Islamic theocracies genuinely are oppressed and discriminated against in much worse ways. Countless Ex-Muslims will testify to that. But that just goes to show why it’s important to keep the distinction as sharp as possible.

The West should be a beacon of liberty to people suffering under theocracy, not just a different variety of body-policing and oppression. The offer of freedom is our best weapon against authoritarian dogmas of all kinds, a crucial way to undermine their power. Backlash laws like the burkini ban, rooted in fear and prejudice, accomplish nothing except deprive us of our power to offer people the one thing that Islamism can’t.

UPDATE: The day after I posted this, France’s highest court ruled that the burkini ban infringes religious freedom. However, Nice and other towns have threatened to defy the ruling and continue imposing illegal fines on wearers.

August 24, 2016
The Intellectual Prison of Ultra-Orthodox Judaism
Next Post