The Fountainhead: We Don’t Need No Education 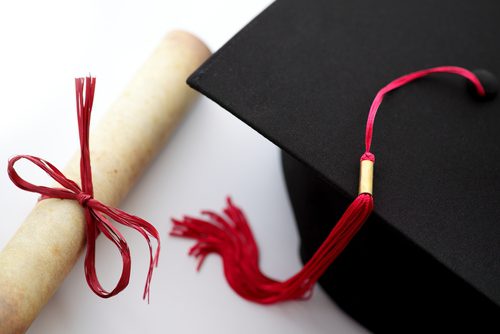 Last time, we found out that Howard Roark, Randian superman, was being expelled from architectural college. In this installment, we’ll find out why. Try to form your own guess before reading on!

When Roark returns to his rented room in town, there’s a message from the dean asking to meet with him. Instead, he spends an hour sitting and doodling, reworking some of his old sketches. He later makes the excuse that he lost track of time; although since neglectfulness is never shown to be part of his character in any other scene, it’s an equally plausible alternate interpretation that he’s being deliberately contrary.

Finally, he shows up on campus for the requested meeting:

The Dean’s office looked like a chapel, a pool of dreamy twilight fed by one tall window of stained glass. The twilight flowed in through the garments of stiff saints, their arms contorted at the elbows. A red spot of light and a purple one rested respectively upon two genuine gargoyles squatting at the corners of a fireplace that had never been used. A green spot stood in the center of a picture of the Parthenon, suspended over the fireplace.

When Roark entered the office, the outlines of the Dean’s figure swam dimly behind his desk, which was carved like a confessional. He was a short, plumpish gentleman whose spreading flesh was held in check by an indomitable dignity.

The dean expresses his regret over Roark’s expulsion, saying that some faculty members strongly supported him. But “those who felt it their duty to vote for your expulsion quite outnumbered the others”:

“I am endeavoring to be helpful, Roark. You must be fair about this. You cannot say that you were not given many warnings before this happened.”

… “Every problem you were given,” the Dean went on, “every project you had to design — what did you do with it? Every one of them done in that — well, I cannot call it a style — in that incredible manner of yours. It is contrary to every principle we have tried to teach you, contrary to all established precedents and traditions of Art. You may think you are what is called a modernist, but it isn’t even that. It is… it is sheer insanity, if you don’t mind.”

“When you were given projects that left the choice of style up to you and you turned in one of your wild stunts — well, frankly, your teachers passed you because they did not know what to make of it. But, when you were given an exercise in the historical styles, a Tudor chapel or a French opera house to design — and you turned in something that looked like a lot of boxes piled together without rhyme or reason — would you say it was an answer to an assignment or plain insubordination?”

“It was insubordination,” said Roark.

I said this often while reviewing Atlas Shrugged: It’ll be difficult, but try to remember which character Rand expects you to empathize with. In spite of the textual evidence, Roark is the one she wants you to think of as mistreated and oppressed in this scene.

Howard Roark has his own unique architectural style, which he prefers to sketch in. There’s nothing wrong with that. The problem is that when he’s given assignments to design buildings in different styles, he flat-out refuses to do them! Is it any wonder he’s being kicked out?

This is like a medical student deciding that when he’s a doctor, he only wants to treat diseases of the kidneys, and therefore he’s going to refuse to learn about any other part of the body. That’s not how school works. You can’t pick and choose which assignments you’ll do and which ones you won’t, not in academia and certainly not in the working world. It’s totally unreasonable and ridiculous for anyone to expect that they should be able to do that. (And to think, people complain about kids today lacking a work ethic!)

But that’s not a consideration in an Ayn Rand novel. She scripts her characters to be perfectly, unrealistically changeless, holding all the same opinions and values from birth (apparently) and never learning or encountering anything that might cause them to waver.

Despite Roark’s recalcitrance, the dean has good news to deliver:

The Dean smiled and leaned forward confidentially, enjoying the overture to a good deed.

“Here is the real purpose of our interview. I was anxious to let you know as soon as possible. I did not wish to leave you disheartened. Oh, I did, personally, take a chance with the President’s temper when I mentioned this to him, but… Mind you, he did not commit himself, but… Here is how things stand: now that you realize how serious it is, if you take a year off, to rest, to think it over — shall we say to grow up? — there might be a chance of our taking you back. Mind you, I cannot promise anything — this is strictly unofficial — it would be most unusual, but in view of the circumstances and of your brilliant record, there might be a very good chance.”

Roark smiled. It was not a happy smile, it was not a grateful one. It was a simple, easy smile and it was amused.

“I don’t think you understood me,” said Roark. “What made you suppose that I want to come back?”

“I won’t be back. I have nothing further to learn here.”

Ayn Rand expects us to take this as an example of how the world hates Howard Roark for his greatness and wants to destroy him. But, as with Hank and Lillian Rearden from Atlas, it unintentionally shows the opposite. What it actually says is that her characters are behaving badly and everyone else is reacting to them exactly as you’d expect.

When Roark was given assignments to design buildings in his own style, he passed. They didn’t spitefully flunk him just for thinking of something original. (The dean even said that he had a brilliant record!) Again, the problem is that he refused to do assignments he didn’t like. Although the school warned him about it many times, giving him a chance to reconsider his behavior, he wouldn’t desist.

Finally, when his grades must have been thoroughly wrecked, the school offers to let him take a year off and come back to try again. Under the circumstances, it’s a magnanimous gesture. But Roark rejects it with a “Screw you guys, I’m outta here!“, insisting that there’s nothing more they can teach him.

This is a theme that recurs throughout the novel. Time after time, Roark chooses to be obstinate and unreasonable, refusing to do anything that isn’t 100% what he wants to be doing, rejecting generous offers if they entail the smallest crumb of compromise. When other characters respond realistically to this towering arrogance and entitlement, the author treats it not as an obvious consequence of her protagonist’s behavior, but further proof of the world’s inexplicable malice towards great men.

January 24, 2017 Dystopia Journal #1: A Vast Unreality
Recent Comments
0 | Leave a Comment
"they avowed their certainty that Jesus would bring her back to life:Despite this not being ..."
Bob Seidensticker The Strange Sad Story of Olive ..."
"...currently every single link in the "Trending at Patheos Nonreligious" is to a "I'm moving ..."
OverlappingMagisteria Announcing: OnlySky
"I've already signed up on Jonathan Pearce's site. Looking forward to the new digs."
ORAXX Announcing: OnlySky
"Interesting. Although if Andrew Hall is coming along, I hope the new site will make ..."
bificommander Announcing: OnlySky
Browse Our Archives
Related posts from Daylight Atheism