The Fountainhead: A Dream Deferred 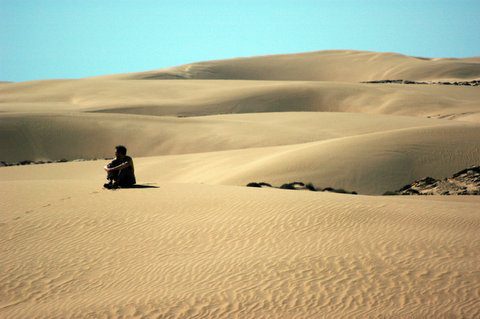 Howard Roark has been working at Henry Cameron’s office for a month. Cameron often comes out to loom over Roark’s shoulder and glare at him, but the two of them have scarcely spoken in all that time. Finally, he calls Roark into his office:

The light of the lamp fell on Cameron’s cheek, on his beard, the white threads glistening, on his fist, on a corner of the drawing, its black lines bright and hard as if embossed on the paper.

Roark stood, halfway across the long room, his weight on one leg, his arms hanging by his sides, one shoulder raised.

“Am I?” he asked quietly, without moving.

Cameron’s gruff demeanor softens as he explains he’s acting not out of malice, but mercy: “I’ll be committing a crime if I keep you here.” The problem, you see, isn’t that Roark is too bad, but too good. He’s too noble and pure for this harsh world, and Cameron doesn’t want him to throw his talent away by staying with him in a dead-end job:

“It’s no use wasting what you’ve got on an ideal that you’ll never reach, that they’ll never let you reach. It’s no use, taking that marvelous thing you have and making a torture rack for yourself out of it. Sell it, Roark. Sell it now. It won’t be the same, but you’ve got enough in you. You’ve got what they’ll pay you for, and pay plenty, if you use it their way. Accept them, Roark. Compromise. Compromise now, because you’ll have to later, anyway, only then you’ll have gone through things you’ll wish you hadn’t. You don’t know. I do. Save yourself from that.”

Cameron views it as an unbearable indignity and a sullying of Roark’s talent that he should have to compromise to earn a living. But since it’s unavoidable, he says, Roark might as well start now and spare himself the pain of having his idealism beaten out of him.

But, again, remember: the “compromise” he’s talking about is letting the clients who pay your salary have some say in what their buildings should look like! That’s not a cruel imposition on an architect’s independence, it’s a basic requirement of the job. The person who’s paying you gets to tell you what he wants from you. You might as well say that an Objectivist police officer is forced to “compromise” because he has to enforce the laws that were actually passed, not the ones he thinks should have been passed.

You might wonder what makes Cameron so certain of all this. How can anyone know that pain and suffering are in Roark’s future? He has an answer for that too:

“Look, Roark, there’s one thing about you, the thing I’m afraid of. It’s not just the kind of work you do; I wouldn’t care, if you were an exhibitionist who’s being different as a stunt, as a lark, just to attract attention to himself. It’s a smart racket, to oppose the crowd and amuse it and collect admission to the side show. If you did that, I wouldn’t worry. But it’s not that. You love your work. God help you, you love it! And that’s the curse. That’s the brand on your forehead for all of them to see. You love it, and they know it, and they know they have you. Do you ever look at the people in the street? …The substance of them is hatred for any man who loves his work. That’s the only kind they fear.”

The narrative suggests that Cameron has been through the same torture that Roark will have to face. He loves his work, people see that and despise him for it, and so they scorn and reject him, consigning him to a life of loneliness, poverty and humiliation.

That’s certainly one theory for why Henry Cameron’s fortunes have gone down in the world. Here’s another:

Henry Cameron had refused to work for the Columbian Exposition, and had called it names that were unprintable… It was repeated also that he had thrown an inkstand at the face of a distinguished banker who had asked him to design a railroad station in the shape of the temple of Diana at Ephesus. The banker never came back. There were others who never came back.

He was thirty-nine years old then, short, stocky, unkempt; he worked like a dog, missed his sleep and meals, drank seldom but then brutally, called his clients unprintable names, laughed at hatred and fanned it deliberately, behaved like a feudal lord and a longshoreman…

As his clients became rarer, his manner to them grew more overbearing. The less the prestige of his name, the more arrogant the sound of his voice pronouncing it. He had had an astute business manager, a mild, self-effacing little man of iron who, in the days of his glory, faced quietly the storms of Cameron’s temper and brought him clients; Cameron insulted the clients, but the little man made them accept it and come back. The little man died.

So, let’s review: Henry Cameron insulted and berated his clients, ordered them around, acted arrogantly, drank heavily, flew off the handle frequently, encouraged people to hate and fear him, physically assaulted potential clients who offered him work that wasn’t the right kind of work… and now he laments that no one wants to hire him anymore, and attributes it to an inexplicable malice toward people who love their jobs.

That’s Ayn Rand in a nutshell. You might as well ask, “Why do all these worthless morons I’m surrounded by dislike me?”

It’s a foreign notion to her that you should treat other people – your paying customers! – with respect and civility, that you should listen to their wishes, and that you shouldn’t boss them around or impose your will on them. It doesn’t occur to her that this makes them more likely, not less, to listen to your advice and let you design their buildings your way.

But Roark says it’s too late for him to change (“It was too late for me twelve years ago,” he says – he’s 22, remember). He’s already firmly set in his ways, broadcasting an attitude of Randian contempt that others can sense:

[Roark] was usually disliked, from the first sight of his face, anywhere he went. His face was closed like the door of a safety vault; things locked in safety vaults are valuable; men did not care to feel that. He was a cold, disquieting presence in the room; his presence had a strange quality: it made itself felt and yet it made them feel that he was not there; or perhaps that he was and they weren’t.

So what you’re saying is, Roark has a bad case of RBF.

The implication is that, because Roark is contemptuous and closed-off, he must have hidden depths he’s not sharing with the world. But as long as we’re going to extend the metaphor beyond the bounds of applicability, I’d respond that not all safety vaults hold valuables. Some are impressive but empty; some are the property of misers who covet worthless heaps of trash; some contain stolen goods being kept from their rightful owners.

In the end, Cameron gives in, rescinds the firing, and tells Roark to report to work tomorrow, as he still has a lot to learn. He’s seen that Roark won’t be persuaded to change course, so he’s no longer going to try.

This scene is set up to make us believe that Cameron is the wise elder, imparting wisdom to the talented but inexperienced Roark. But really, neither can teach the other anything because they suffer from the same flaw, which they’re both unaware of just as fish are unaware of water. The malice they’re discussing isn’t inexplicable or random; it’s the natural reaction that any human being would have to being treated as both Roark and Cameron treat others, as mere obstacles to be steamrolled. The text even says it: “Cameron had never known how to face people.”

But rather than accept that dealing with people is a skill that can be learned, improved upon and mastered just like any other, they dismiss the entire realm of human interaction as a nullity, not even worth considering. Given that starting point, they’re getting precisely the response you would expect.

March 27, 2017 The Hypocrisy of Geert Wilders
Recent Comments
0 | Leave a Comment
Browse Our Archives
get the latest from
Daylight Atheism
Sign up for our newsletter
POPULAR AT PATHEOS Nonreligious
1