I Get Religious Mail: Bibles for China

I Get Religious Mail: Bibles for China April 5, 2017 Adam Lee

The 1.3 billion people in China are a tempting target for marketers, especially as the country industrializes and they become more affluent. Countless Western companies have tried to expand into China, often complying with the authoritarian government’s censorship demands, for the sake of access to that enormous market.

Religious evangelists are hungering to make converts in China for similar reasons. And they, too, appear to be engaging in calculated self-censorship to do so, as we can see from the latest piece of religious spam I got in the mail: 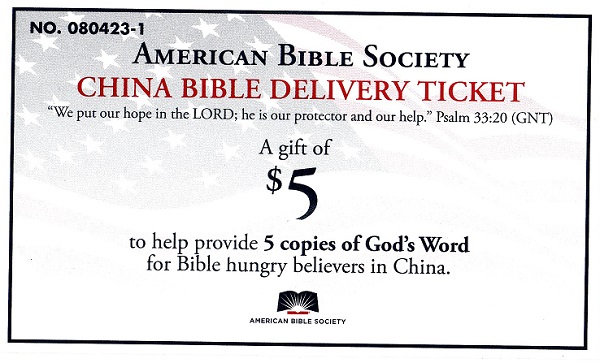 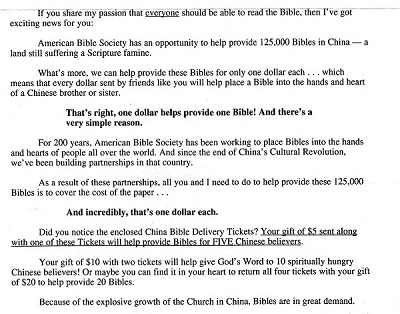 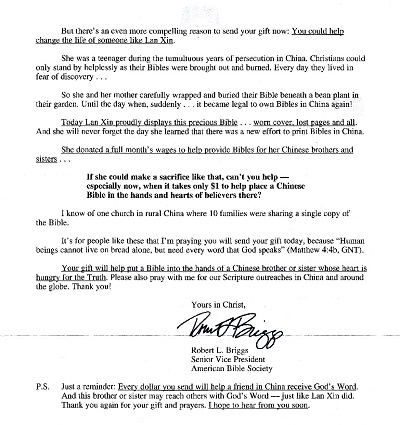 This letter, from the American Bible Society, is asking for money “to help provide… copies of God’s Word for Bible hungry believers in China”. It claims that there are huge numbers of Chinese people “who are hungry to know God and have their lives transformed”.

Obviously, missionaries asking for money to spread religious tracts and scripture is nothing new. But usually when they make an appeal like this, they offer an explanation of why Bible distribution is difficult in whatever country they’re working in, and how donations will help the cause.

The letter calls China “a land still suffering a Scripture famine” and says that “Bibles are in great demand”. It refers obliquely to the “tumultuous years of persecution”, but says those days are over. However, it doesn’t address the obvious question: since Christianity is no longer illegal there, and since the country is rapidly advancing, if Chinese people want Bibles, why don’t they just go out and get them for themselves? They have the internet, after all.

While you might be able to come up with answers to this question, I noticed that the letter doesn’t suggest any of them. It presents the need as a given, with no stated reason for it.

You could say, truthfully, that the Chinese government employs armies of censors and a sprawling architecture of surveillance to filter the internet. You could say that China maintains its own state-run churches and persecutes and harasses others. You could speak to the lack of true freedom of speech and conscience. You could even say that China’s ruling Communist party is still officially atheist.

However, the American Bible Society makes mention of none of these things.

Why the reticence? One possible reason is hinted at in the letter, which says “we’ve been building partnerships in that country” in order to do their work. It’s likely that denouncing the Chinese government would get them expelled and banned in short order. Whether for cynical reasons or tactical ones, they’ve judged that it’s better to keep quiet about human rights and present their evangelistic mission in terms that are as neutral and apolitical as possible. You can decide for yourself whether this is compatible with the aims they claim to uphold. 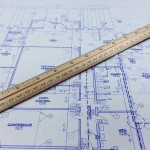 April 7, 2017 The Fountainhead: Know Your Customer
Recent Comments
0 | Leave a Comment
Browse Our Archives
get the latest from
Daylight Atheism
Sign up for our newsletter
POPULAR AT PATHEOS Nonreligious
1