Do Right-Wing Christians Want People to Be Destitute? 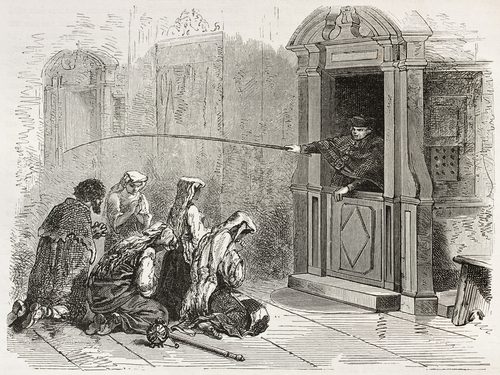 This article was originally published on AlterNet in 2014.

The Affordable Care Act, also known as Obamacare, is now in its fourth year, and the numbers point to a solid success. Thanks to Obamacare, millions of people can afford health insurance for the first time, and millions more still have health insurance because now they can’t be dropped by their insurance company for getting sick. The once-astronomical growth of costs has slowed substantially, and in some markets is even decreasing.

The ACA isn’t a perfect solution, but its successes deserve to be celebrated. And they’re especially notable in light of the fact that the law has had to run (and is still facing) a gauntlet of the most ferocious opposition that’s ever confronted any major piece of legislation: a blizzard of lawsuits, filibusters, attack ads spreading ludicrous scare tactics, lockstep opposition from conservative politicians. Even now, refusenik Republicans are deliberately impeding it by refusing to set up their own state exchanges or expand Medicare in states they control.

The Republicans have tried so hard to make Obamacare fail because its success undermines their creed that government can never accomplish great things or make society a better place to live. As evidence of this, a new talking point has become the conservative refrain: that it should never have been the government’s job to aid the needy at all, and that people should instead turn to private charity, like churches, for help. For example, the Republican senator-elect from Iowa, Joni Ernst, has said:

“We have lost a reliance on not only our own families, but so much of what our churches and private organizations used to do,” she went on. “They used to have wonderful food pantries. They used to provide clothing for those that really needed it, but we have gotten away from that. Now we’re at a point where the government will just give away anything. We have to stop that.”

The same argument has been made by politicians such as (of course) Michelle Bachmann, and the writer Marvin Olasky, whose conservative classic The Tragedy of American Compassion asserted, according to Wikipedia, “that private individuals and organizations, particularly Christian churches, have a responsibility to care for the poor” and are “more effective than the government welfare programs of recent decades”. (Newt Gingrich gave copies of this book to new Republican representatives in 1992.) The libertarian author Jude Blanchette has also made this argument:

For large charities such as the Salvation Army and smaller local charities run by churches and other private organizations, the fight against poverty has been going on for the past 150 years. Tragically, standing in their way has been the federal government.

This view, which Mike Konczal calls “the voluntarism fantasy“, is wildly ahistorical. If it were true, pre-New Deal America would have been a utopian paradise where no one ever went hungry or homeless, and where everyone’s needs were provided for by the benevolent generosity of the churches and other private charities. (The reality was much grimmer, and included such things as shantytowns dubbed “Hoovervilles” as well as hunger marches by the unemployed.)

On one level, remarks like Ernst’s could be viewed as deliberate, “let them eat cake”-style indifference to the size of the problem. Private charity alone can’t even come close to supplying all the needs of society, which is something that charities themselves, including religious charities, know perfectly well.

Completely replacing the more than $105 billion that the government spends annually on social programs would cost every church in the nation more than $50,000 – a staggering sum, especially considering that a majority of small churches in the U.S. run at a loss as is. Cutting government charity on the scale that Republican Congresses propose would be armageddon“, according to local charities and food banks.

But I think there’s an explanation that runs deeper than indifference. I suspect many religious conservatives are well aware that what they propose would mean throwing millions of people into destitution. In fact, they’re counting on it.

Under the law, churches have wide latitude to discriminate and to put conditions on whom they’ll hire and whom they’ll serve, far more than any private business. In exchange for ladling out soup, they can make people sit through a sermon; they can impose an ideological loyalty test; they can refuse to serve people they think might be gay; they can discriminate for any reason or for no reason at all. (The one thing that churches can’t legally do is tell their members how to vote – at least, they can’t do this if they want to retain their tax exemption – but they’re fighting hard to repeal even that trivial restriction, with right-wing pastors all around the country repeatedly flouting the law and daring the IRS to punish them.)

While most evangelical churches proclaim that they want people to convert voluntarily, their actions show otherwise. When given the chance to coerce their audience, they’ll do so gleefully, as we’ve seen in prison ministries all over the country where inmates are given special rewards and privileges in exchange for their cooperation with religious indoctrination. What they want, in short, is a captive audience.

If government charity were to be cut off, the churches wouldn’t be able to come close to supplying the wants of everyone, and so they’d have strong incentive to impose stringent conditions on the people they did help. Only the most faithful, the most compliant, the most submissive would be able to get through the door. And that’s precisely the state of affairs that the religious right yearns for. What they want is to build a theocracy from the ground up, where the poor and the needy are abjectly dependent on a church that can yank away the necessities of life if it judges them insufficiently compliant, and so the masses will have no choice but to be corralled and steered.

Even today, we can see this conservative vision put into practice, and witness the terrible consequences that result when it blocks the government from helping the needy. Consider Mississippi, which is both the most religious and has the most churches per capita of any U.S. state. If rosy visions like Ernst’s were true, Mississippi would be the best place in the country to live. But in reality, it’s the poorest and (by life expectancy) sickest state. Nowhere in the U.S. needs healthcare reform more badly than Mississippi does; and at the same time, no other place seems less likely to get it, thanks to anti-liberal, anti-Obama fervor that that still burns white-hot.

There was once a time when conservative politicians believed that government had a role in fixing these kinds of problems. According to a report by Sarah Varney in Politico, as recently as 2007, Mississippi’s Republican state government was planning its own health insurance exchange (paralleling the similar system created by Mitt Romney in Massachusetts).

But when Obama and the Democrats began championing that same idea, it become radioactive in conservative eyes, thanks to the reactionary rise of the Tea Party and its “we’re against anything Obama is for” platform. The Tea Party backlash resulted in the state abruptly abandoning its half-completed exchange and refusing the federal expansion of Medicare, leaving hundreds of thousands of Mississippians stranded with little or no access to care. This grim farce is emblematic of what the resentful right has wrought: Mississippi’s elected officials, whose job it is to look out for the common good and the general welfare of their constituents, have instead bent all their effort toward actively making their people’s lives worse.

It’s often been pointed out that when it comes to federal aid dollars, many conservative, supposedly individualist red states are moochers that take in more than they pay out, while the large, affluent blue states are the makers that sustain the system through their generosity. But while this is ironic, it’s not at all coincidental. It’s the intended result of an economic and legal regime designed by right-wing elites who yearn for a feudalist-style world where a few wealthy politicians and churchmen wield all the power and everyone else lives in servitude. The idea of a society founded on egalitarianism, where everyone has an equal voice, is intolerable to them.

April 28, 2017 The Fountainhead: Why So Serious?
Recent Comments
0 | Leave a Comment
Browse Our Archives
get the latest updates from
Daylight Atheism
and the Patheos
Nonreligious
Channel
POPULAR AT PATHEOS Nonreligious
1