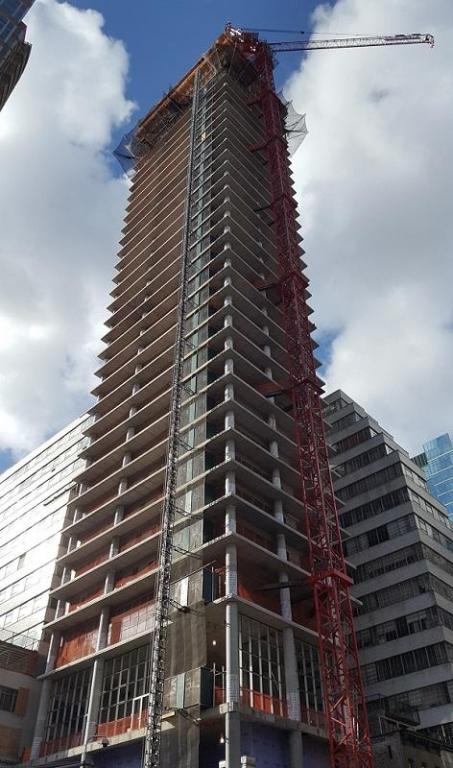 While Roark is out on a job site, he takes an interest in one of the men working on the building under construction:

The man raised his head and turned to him abruptly. He had a big head and a face so ugly that it became fascinating; it was neither old nor flabby, but it was creased in deep gashes and the powerful jowls drooped like a bulldog’s; the eyes were startling — wide, round and china-blue.

Unlike the view she later espoused in Atlas Shrugged, in this book Rand implies that a person can be competent without being devastatingly handsome. That’s more realistic, which is nice. But even here, she apparently couldn’t resist the temptation to equate blue eyes with Good.

The worker is trying to bend pipes around a support beam, an arduous task. Roark suggests that he save himself the trouble by cutting a hole in the beam and running the conduits straight through. The worker is scornful of the idea, telling him, “Run along, punk. We don’t like college smarties around here” – so Roark offers to do the job himself:

Roark took the man’s gloves and goggles, took the acetylene torch, knelt, and sent a thin jet of blue fire at the center of the beam. The man stood watching him. Roark’s arm was steady, holding the tense, hissing streak of flame in leash, shuddering faintly with its violence, but holding it aimed straight.

Impressed, the worker asks him where he learned to do that. An amused Roark replies, “I’ve been an electrician, and a plumber, and a rivet catcher, and many other things.” (This is an early echo of the view later espoused in Atlas that if you own a company, it must mean you’re able to do any job that anyone in that company does.)

The man’s name is Mike, and once he’s introduced himself to Roark, the two of them strike up a conversation. Mike apologizes for misjudging him, saying that he despises architects as “office boys” who only know “pretty pictures and tea parties”, and Roark is the first one he’s met who’s different. Roark says, “If you’re apologizing, don’t. I don’t like them either.”

Just to note in passing, this contradicts what Roark said to Keating when he claimed not to hate him. Rand asserts that Roark isn’t actively malicious toward other people, just indifferent to them. But this line undermines that claim.

Roark agrees to go out for a beer with Mike, an offer he refused with Keating:

They sat together at a table in the corner of a basement speakeasy, and they drank beer, and Mike related his favorite tale of how he had fallen five stories when a scaffolding gave way under him, how he had broken three ribs but lived to tell it… he owned a set of tools and an ancient Ford, and existed for the sole purpose of traveling around the country from one big construction job to another. People meant very little to Mike, but their performance a great deal. He worshipped expertness of any kind… His view of the world was simple: there were the able and there were the incompetent; he was not concerned with the latter.

No surprise that Mike has the binary worldview of the stereotypical Randian character, dividing humanity into the productive class and the worthless moochers (and of course his dividing line is exactly the same as Roark’s; many real-life groups that want to partition humanity in a similar way wouldn’t agree on what the criterion of worthiness is).

But let’s talk for a moment about Mike’s “favorite tale”, of falling five stories and living to tell about it, and what it says about the working conditions he’s used to. (Obviously he wasn’t seriously hurt, since he shares the same virtual immunity to injury as all other Ayn Rand protagonists.)

The famous Lunch Atop a Skyscraper photograph, though it was probably staged, was a true representation of the extreme danger and lackadaisical attitude toward safety that prevailed in the 1920s and ’30s. In the first era of high-rise construction, before safety features like harnesses and nets were mandated by law, the workers who built New York’s skyline flirted with death every day.

It’s hard to be certain how many early construction workers died on the job, because business owners didn’t have to keep records and because it wasn’t considered an exceptional event. But the estimates paint a grim portrait:

Early ironwork, without hard hats or lanyards or numerous other modern safety measures, was a rapacious killer. In 1907, as many as one in seven men died on the job. “We do not die,” an early motto went. “We are killed.”

Another site estimates that two out of five died or became disabled. That’s a cost worth remembering, whenever you gaze at that majestic Manhattan skyline that Ayn Rand loved so much.

Even today, despite modern safety precautions, construction workers in the U.S. die on the job at a rate almost three times that of other industries – mostly from falls. And conditions are far worse in developing countries like Qatar, where foreign migrant workers labor in brutal conditions and are treated as callously as if they were disposable parts.

None of this seems to matter very much to Ayn Rand. As you can infer from Mike’s attitude, she treats on-the-job hazards as something to be endured, like weather, not something that can or should be changed. As in her later works, the narrative spotlight rests firmly on her Great Men and their creative minds. The people who labor to actually make that vision a reality are out of focus. At best, they’re an afterthought.

Unlike Atlas Shrugged, The Fountainhead doesn’t try to present Rand’s entire economic and political philosophy. You might argue that the treatment of workers isn’t the point of the novel. Even so, given how intimately it’s concerned with architecture and construction, you might expect it would come up, even if only in passing.

Given that Rand wants us to believe Roark has the common touch, it would be a noble gesture for him to acknowledge the sacrifices of the workers who erect his towering skyscrapers. It would’ve been an opportunity to show how much better a builder he is by showing that he treats the people at his job sites better than the villains do. As it is, the novel appears to be sending the message that Roark is only concerned with the well-being of the workers whose political views exactly mirror his own.