On election night, of all the bleak things I imagined, the worst was that Trump would take America out of the fight against global warming. Unsurprisingly, he has.

This is the consequence that counts. The embarrassment and the decline in our national prestige are real, but will fade in time when a competent administration takes power. No matter how badly Trump and the GOP mismanage the economy, even the worst depression ends eventually. However many people terrorists may kill in their nihilistic spurts of violence, they pose no threat to democracy. If Obamacare is scrapped, we’ll be poorer and sicker and people will die needlessly, but we’ll muddle on. All of this is bad, but none of it poses an existential threat to America or to human civilization.

Climate change does. It’s the only issue where our distant descendants will have to live with the burden of the choices we make today. We’re doing damage to the planet that can’t be undone, and the longer we delay action, the worse it’s going to get.

Ironically, this is also the one issue where Trump isn’t unusually awful. The GOP is the only major political party in the world that’s institutionally committed to denial of climate change. Any Republican politician who won the presidency would probably have done the same. But that’s not an excuse for Trump, it’s a damning of his entire party. His sycophants and enablers are as culpable as he is.

To be brutally honest, the Paris agreement might not have been enough even with the U.S. on board. Most of its goals were non-binding and aspirational. It’s unclear if the world was ever willing to take action on the massive scale needed to stop climate change. Even with a Democratic administration, we might well have fallen short. But at least it was something – a statement that we recognized the problem and were trying to take steps to solve it. With a Republican administration, it’s clear they have no intention of trying at all.

The senselessness of it all is that, aside from the reflexively anti-science minority faction of the GOP, no one was calling for this. Literally no one’s interests are served by quitting. Even Exxon Mobil wanted the U.S. to stay committed to the Paris agreement. The only people rooting for us to trash it were the resentful white racists who believed Trump’s laughable lie that he can revive the coal industry. But their descendants are going to pay a steep price for their folly.

As I’ve written before, coal is in a death spiral, Paris agreement or no Paris agreement. Neither Donald Trump nor all the Republicans in the U.S. can halt the market forces driving it to extinction. Coal plants are going under left and right, even in the heart of coal country.

The clean-energy era is coming, no matter what. Solar and wind have unbeatable advantages over fossil fuels. They don’t poison the air or the water with pollution. They can be harvested anywhere; they don’t tie us to squalid dictatorships or brutal theocracies. Once they’re up and running, they supply power essentially for free – sometimes even cheaper than free.

The Paris agreement was nothing but a pledge to accelerate the coming of that inevitable future while it’s not too late to avert catastrophic harm. By quitting, we’ve shot ourselves in the foot twice over: we’ll suffer the worst ravages of global warming, and U.S. companies and U.S. workers will lose out because the green energy era will be developed and built elsewhere. That’s why Exxon and other oil companies wanted us to stay in. The only thing those angry coal miners have accomplished is to guarantee that, when the last coal jobs in their towns dry up, there won’t be anything to replace them.

It gives me some hope to read about measures of resistance like mayors, governors, and corporations pledging to do their part under the Paris accord, or Michael Bloomberg paying what the U.S. had promised the U.N. It’s a noble effort that may lessen the damage. But in spite of this, absent some longshot geoengineering fix, I think it’s clear that the time has passed to think about prevention. We need to start thinking about adaptation and mitigation.

First of all, we need to pull back from the coasts. The retreat is already happening: coastal communities like New Jersey’s Long Beach Island are “drowning in slow motion“. It won’t come in one apocalyptic storm, but in a steady march of years where flooding gets worse and worse until habitation is impossible. Cities like Miami are doomed, whether we recognize it yet or not. We should also establish zoos and wildlife refuges to save what species we can.

Still, these feel like half-measures, and they are. If our descendants feel like cursing us for the choices we made in 2016, they’ll have good reason. 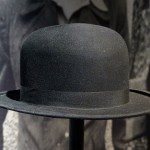