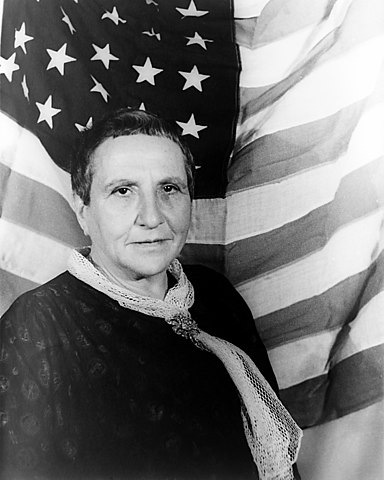 Another of Ellsworth Toohey’s proteges is a writer named Lois Cook. She’s “an author who did not sell” but supports herself through “the fortune she had inherited from a long line of successful tradesmen”. Nevertheless, she’s hailed by Toohey and others of his circle as a literary genius. Her books, neither narrative nor poetry, are rambling, free-associative collections of words. Peter Keating loves her writing and thinks, “he was certain that it was profound, because he didn’t understand it.”

They meet in person when Toohey puts them in contact, informing them both that Lois Cook wants a house and Peter should build it for her:

Lois Cook was thirty-seven. She had stated insistently, in her publicity and in private conversation, that she was sixty-four. It was repeated as a whimsical joke and it created about her name a vague impression of eternal youth. She was tall, dry, narrow-shouldered and broad-hipped. She had a long, sallow face, and eyes set close together. Her hair hung about her ears in greasy strands. Her fingernails were broken. She looked offensively unkempt, with studied slovenliness as careful as grooming — and for the same purpose.

As I’ve said before, one of the useful things about The Fountainhead is that you can see Ayn Rand’s authorial tics evolving discernibly over the course of the novel, coming closer to their Atlas Shrugged end-state.

At the beginning of the novel, she saw nothing unusual in bad guys like Peter Keating being handsome and heroes like Roark being, if not ugly, then blocky and grim. She progressed to the frail, big-headed caricature of Ellsworth Toohey, and now this. By the time she wrote Atlas, she had her mind firmly made up that all good people were handsome and all bad guys were fat and ugly.

Like most characters in The Fountainhead, Lois Cook is a thinly fictionalized version of a real person. In this case, her model was Gertrude Stein, the influential early 20th-century avant-garde author and poet, who wrote in a similar stream-of-consciousness style.

Rand hated Stein, and her suggestion that Cook/Stein intentionally made herself ugly is an especially nasty piece of literary slander. It’s true that Stein was mocked in the same way, but it wasn’t from a conscious effort to be unattractive. It came out of her experience as one of the first women to attend Johns Hopkins Medical School, in the era when formerly all-male institutions were opening their doors to women for the first time:

“…[Stein’s] friend and fellow medical student Emma Lootz… later recalled the prejudice against women medical students at Hopkins as so severe that the only way she made it through was by wearing her best hat. ‘It had roses on it,’ she tartly informed Stein’s first biographer Elizabeth Sprigge. Stein, however, was not of the rose-hat-wearing persuasion. Later described by one of the men in her medical school class as ‘the old battle-ax,’ she was apparently far from fastidious about her appearance. ‘Big and floppy and sandled and not caring a damn,’ another told Sprigge.” (source)

Like many women of her time and today, Stein chafed against the double standard that values women first and foremost for their appearance. She evidently decided that she couldn’t live up to an impossible-to-meet standard of femininity, so she wasn’t going to try. (Being a lesbian was one more reason not to care about male opinions.) She always wore black and refused to wear a corset. She even hired an instructor to give her boxing lessons, according to her roommate, who said: “The chandelier would swing to shouts of ‘now give me one in the kidney!'”

Rand, like Stein, wasn’t often described as conventionally attractive. But she dealt with it in a different way: by populating her books with thin, pale-skinned, blonde, gorgeous heroines like Dominique Francon. It’s as if she had internalized and accepted the double standard, and was pining for her inability to personally live up to it. It might be one of the first cases of the phenomenon of the Cool Girl.

“I want a living room without windows. No windows at all, remember that when you draw up the plans. No windows, a tile floor and a black ceiling. And no electricity. I want no electricity in my house, just kerosene lamps. Kerosene lamps with chimneys, and candles. To hell with Thomas Edison! Who was he anyway?”

Her words did not disturb him as much as her smile. It was not a smile, it was a permanent smirk raising the corners of her long mouth, making her look like a sly, vicious imp.

“And, Keating, I want the house to be ugly. Magnificently ugly. I want it to be the ugliest house in New York.”

When Peter expresses surprise and confusion at this:

“Keating, where’s your courage? Aren’t you capable of a sublime gesture on occasion? They all work so hard and struggle and suffer, trying to achieve beauty, trying to surpass one another in beauty. Let’s surpass them all! Let’s throw their sweat in their face. Let’s destroy them at one stroke. Let’s be gods. Let’s be ugly.”

…He designed the house as she wished it. It was a three-floor edifice, part marble, part stucco, adorned with gargoyles and carriage lanterns. It looked like a structure from an amusement park.

His sketch of it was reproduced in more publications than any other drawing he had ever made, with the exception of the Cosmo-Slotnick Building. One commentator expressed the opinion that “Peter Keating is showing a promise of being more than just a bright young man with a knack for pleasing stuffy moguls of big business. He is venturing into the field of intellectual experimentation with a client such as Lois Cook.”

To the naive reader, it might not be obvious how this is different from Howard Roark, since Roark also designs houses that most people think are weird, ugly and unlivable. The answer is that Roark’s houses are Objectively Beautiful, which means they’re beautiful even if – and this is the part that someone not acquainted with Ayn Rand will find hard to grasp – no one else thinks they’re beautiful. Their beauty exists in a Platonic realm that’s imperceptible to lesser human beings.

In classic emperor’s-new-clothes fashion, Toohey and those around him claim that anyone who dislikes their work is spiritually unfit to recognize its greatness. We’re meant to recognize this as a sham; but the irony is that Rand makes the exact same argument, and expects us to accept it, for her hero. When Roark builds someone a house, she pours scorn on them if they don’t appreciate it as the greatest house ever, even if it lacks privacy, is too hard to get around in, or just isn’t what they wanted. 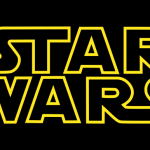 January 3, 2018
The Last Jedi and the Problem of Nihilism
Next Post 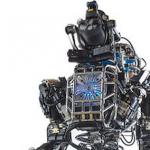