The Wall of Silence Around Lawrence Krauss

The Wall of Silence Around Lawrence Krauss March 5, 2018 Adam Lee

For all that we in the secular community like to excoriate the churches for covering up for predators, I have to question if we’re that much better. When serious allegations of sexual assault were made against Michael Shermer, several high-profile atheist individuals and groups circled the wagons around him and tried to build a wall of silence – either dismissing the accusations as unimportant, outright refusing to mention them, or trying to dissuade others from doing so. To this day, Shermer hasn’t faced any personal or career consequences that I’m aware of.

Now I wonder if we’re seeing the same thing all over again with regard to Lawrence Krauss.

There’s a group of people calling themselves Guerrilla Skepticism on Wikipedia, whose original mission was to inject an appropriately balanced and skeptical viewpoint into articles on supernatural and paranormal topics. That’s a mission I’d be all in favor of. However, as Hayley Stevens points out, they’ve apparently adopted a new purpose: making sure the allegations against Krauss are kept off his biography page on Wikipedia.

You can see this for yourself: as of today, March 5, Krauss’ Wikipedia page has no mention of any recent developments – not the allegations themselves, not Krauss being barred from multiple college campuses, not several of his upcoming talks being canceled. If you look at the talk page, you can see several contributors deleting edits by other users that mention these things, and insisting that the Buzzfeed article is just “gossip” and that “Buzzfeed isn’t usually considered a reliable source”, and that this merits totally excluding any mention of it.

While Buzzfeed does publish its share of silly clickbait, their investigative unit employs 20 journalists and engages in serious, important reporting. One of their reporters was a Pulitzer finalist in 2017; another won a Pulitzer prior to being hired there. Ironically, BuzzFeed’s own Wikipedia page has categories for “Notable stories” (significantly, including the sexual-misconduct accusations against Kevin Spacey) and “Awards and recognition”.

As for the journalists who wrote the Krauss story, one of them, Peter Aldhous, has reported for the journals Nature and Science and teaches investigative and policy reporting at UC Santa Cruz. The other reporter, Azeen Gorayshi, has written for the Guardian, New Scientist, Newsweek, and Wired, among others. The editor, Virginia Hughes, has written for the Atlantic, the New York Times, National Geographic, and Slate.

If this doesn’t meet the definition of serious, noteworthy journalism, then no such thing exists. Clearly, the Guerrilla Skepticism group is employing their own biased and highly selective definition of “reliable source” in order to avoid mentioning stories that would cast their hero in an unfavorable light, even in a supposedly neutral and comprehensive encyclopedia article. (The State Press, a student-run newspaper at Arizona State University, has since published their own article about Krauss.)

Next, we have to talk about Matt Dillahunty.

We’ve met at conferences several times, and we were on a panel together at Skepticon in 2012. I think he’s a generally decent guy who says a lot of good things about equality.

Last month, he was scheduled to appear, along with Sam Harris and Lawrence Krauss, as a headlined speaker at the Pangburn Philosophy “A Celebration of Science & Reason” event. Krauss dropped out at the last minute when the Buzzfeed article came out, and there was a conversation on stage about it which you can view here.

Afterward, Matt wrote this post on Facebook, in which he wrote angrily that Buzzfeed’s Virginia Hughes contacted him on his personal cell phone to ask about a followup she’s writing, presumably related to Krauss. He considered this an unforgivable breach of his privacy.

I left a comment on this thread. I don’t have a screenshot of it – more on that in a second – but I said that, whether Matt thinks of himself this way or not, he’s a public figure with regards to this story; that getting public figures to comment on stories they’re connected to is literally a journalist’s job; and that in my opinion, nothing she did constitutes harassment.

He deleted that comment and blocked me, without a word of reply. [EDIT: see below]

And it wasn’t just me. Based on comments in that thread and elsewhere, Dillahunty went on a blocking spree, cursing out and banning anyone who said anything even mildly critical of him. It seems he refuses to tolerate any criticism or disagreement with his behavior regarding this story, even from people who consider him a colleague or a friend.

Amanda Marcotte also commented to offer Matt some friendly, good-faith advice, explaining that Hughes was trying to do him a favor by making sure he had a chance to comment on whatever story she was writing. He blocked her.

One of my fellow Patheos bloggers, Peter Mosley, wrote that “It is discouraging to see the time you’ve spent publicly shaming people who want to know why you worked with Krauss if you knew about the allegations,” to which Matt responded “Go fuck yourself” and blocked him. Ryan Bell, who said that he considered Matt a friend, concurred with me that it’s a journalist’s job to ask more than once; Matt said “You can fuck right on off, too, Ryan,” and blocked him. Patrick Green offered a pointed critique and said he was “[d]one sticking up for you,” to which Dillahunty responded “Thanks for nothing,” and another block. I could go on adding names to this list, and those are just the ones I saw.

To be clear, I don’t care if Matt Dillahunty blocks me or anyone else on Facebook. I do care that his behavior demonstrates a pattern of wanting to evade questions about Krauss. He’s clearly determined to keep quiet about this story, and, in my opinion, is putting on a show of indignation over the specific means that this specific journalist used to contact him as a smokescreen.* (Ironically, and more than a little hypocritically, he wrote a followup post in which he thanks people for “great disagreements and discussion”.)

It’s worth mentioning in this context that Matt Dillahunty was planning to introduce Michael Shermer at a conference as recently as February 19. He’s said that he no longer is, but hasn’t explained what prompted the change.

Based on Matt’s recent behavior, it seems to be a fair criticism that he advocates for feminism and equality in the abstract, but goes silent whenever speaking up might personally cost him. I think he sees a chance to climb into the upper echelons of skepticism, and he knows, whether implicitly or explicitly, that the men who move in these circles all consider each other friends and he’d risk being blackballed if he said anything too specific against any of them.

To be clear, if this is his thinking, I’m not saying he’s wrong. There is a price for being consistent in your principles. (I’m willing to bet Dawkins no longer takes PZ Myers’ calls.)

But there’s a price for staying silent as well. If you won’t stand up for the things you believe when it comes to the testing point, you have only yourself to blame if people conclude that you never meant any of it. Worse, the silence and reticence of principled people is what allows true predators to get away with their misdeeds.

I’d be remiss if I made it seem like the atheist community was unanimously protecting Krauss. I’ve witnessed many people who said they looked up to him in the past concluding, regretfully, that these allegations have merit. The American Humanist Association deserves particular credit for immediately speaking out:

But this impartial, principled attitude is far from universal. We have a lot of ground to make up before we can say that the secular movement as a whole is truly enlightened.

* On stage with Harris, Matt Dillahunty said the Krauss story had been published just a few hours earlier and he’d been on a plane for most of that time, so it was far too early for anyone to expect him to have a comment on it. Fair enough. But when Virginia Hughes contacted him, it was several days later, and he still had no response to give, nor even a promise to address it in the near future. What was his explanation then?

EDIT 2: Matt points out that he didn’t delete my comment on his Facebook page, just blocked me so I couldn’t see it or his reply to it. A helpful reader provides a screenshot. You can judge for yourself whether it makes him seem like the reasonable one: 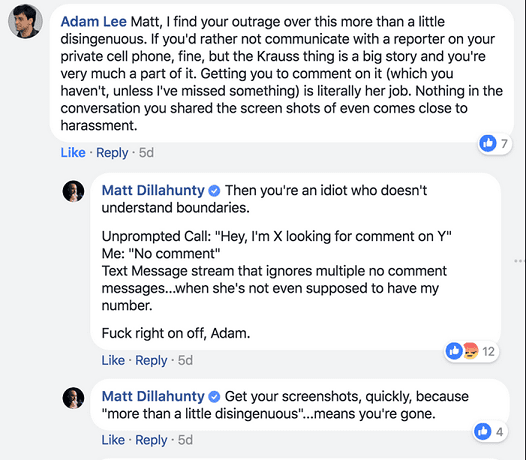 EDIT 3: As of March 7, Krauss’ Wikipedia page now contains a section on the allegations, including his resignation from the Bulletin of the Atomic Scientists Board of Sponsors and his employer, Arizona State University, placing him on leave.

March 7, 2018 Secular Women at Work
Recent Comments
0 | Leave a Comment
Browse Our Archives
get the latest from
Daylight Atheism
Sign up for our newsletter
POPULAR AT PATHEOS Nonreligious
1