The Fountainhead: Gangs of New York 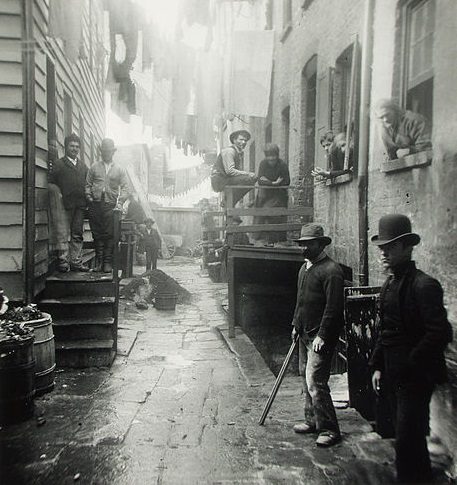 Last time, Rand introduced us to Gail Wynand, the rich, powerful and ruthless newspaper publisher who holds the world in the palm of his hand. Today, we’ll hear more about how he rose out of the gutter and clawed his way to the top.

Wynand grew up poor in Hell’s Kitchen, back when it was the gritty and violent slum where the name was coined and not the gentrified neighborhood of multimillion-dollar condos it now is. In flashback, she tells the story of how he was in a gang of juvenile delinquents and decided to stage a power play to become the gang’s boss:

Gail Wynand, aged twelve, stood in the darkness under a broken piece of wall on the shore of the Hudson, one arm swung back, the fist closed, ready to strike, waiting… He knew that the leader of the boys’ gang was looking for him and that the leader would not come alone. Two of the boys he expected fought with knives; one had a killing to his credit.

Wynand is outnumbered three-to-one, and one of his enemies has a weapon. But the idea that mere numbers could decide the outcome of a fight, when an Objectivist Hero is involved, is deeply offensive to Ayn Rand. Instead, there’s a comical scene which suggests that being a diehard individualist gives you superhuman speed and strength, even if you’re a twelve-year-old boy:

Gail Wynand was unrecognizable; they saw a whirl suspended in the air above them, and something darted at them out of the whirl with a scalding touch.

He had nothing but his two fists; they had five fists and a knife on their side; it did not seem to count. They heard their blows landing with a thud as on hard rubber; they felt the break in the thrust of their knife, which told that it had been stopped and had cut its way out. But the thing they were fighting was invulnerable. He had no time to feel; he was too fast; pain could not catch up with him… They were not fighting a man. They were fighting a bodiless human will.

I wondered when reviewing Atlas Shrugged if being a capitalist gives you innate knowledge of Objectivist Kung Fu, and this scene confirms that that’s the case.

In classic kung fu films, the hero has to study for years in some isolated mountain dojo under a mysterious old master. Only after that training can he become a Bruce Lee-style warrior who mows down enemy ninjas with flying kicks and implausible feats of swordplay. While these stories are hardly realistic, at least they acknowledge that study and practice is required to become an expert fighter. But in Ayn Rand’s world, you get all this for free, just by believing in capitalism.

Wynand is the second character in The Fountainhead who’s at least leaning on the fourth wall, if not breaking it. Just as Ellsworth Toohey has figured out that he’s in an Ayn Rand novel and knows he can discern a person’s deepest desires from their appearance, Gail Wynand is clever enough to weaponize the built-in plot armor that all Randian heroes have.

Much the same way that Dagny Taggart or Mike the construction worker can shrug off a plane crash or a five-story fall because they love capitalism, Wynand knows that being punched or stabbed won’t hurt him, by decree of the author. He can pick fights with bigger, stronger or more numerous enemies with no doubt as to the outcome.

What’s more, Rand suggests that Wynand won not just because he was a better fighter, but that his victory was foreordained. In keeping with the eugenicist ethics we saw her advocate previously, she implies that although his family is poor, Wynand is a naturally superior breed of human being, which means that he deserves to rule over others:

His father was a longshoreman, a tall, silent, illiterate man who had never gone to school. His own father and his grandfather were of the same kind, and they knew of nothing but poverty in their family. But somewhere far back in the line there had been a root of aristocracy, the glory of some noble ancestor and then some tragedy, long since forgotten, that had brought the descendants to the gutter.

She describes Wynand as possessing some hint of “the aristocrat of the Middle Ages… the feudal baron created to rule”.

This is such a telling glimpse into Rand’s worldview, at least at the time she wrote this book. In her other writings, she’d have you believe that Objectivists deserve to be in charge because of merit. They’re more intelligent, or more dedicated to the job, or willing to work harder than everyone else. But in this chapter, we see that these traits aren’t the cause but the effect. The real reason for their success is their genetics. They’re natural aristocrats, “created to rule”, who have the right to reign over the rest of us merely by virtue of existing. Even if they start in a slum, it’s just a matter of time before their inherent superiority reveals itself.

There were people in Hell’s Kitchen who never ventured beyond its boundaries, and others who seldom stepped out of the tenement in which they were born. But Gail Wynand often went for a walk through the best streets of the city. He felt no bitterness against the world of wealth, no envy and no fear. He was simply curious and he felt at home on Fifth Avenue, just as anywhere else. He walked past the stately mansions, his hands in his pockets, his toes sticking out of flat-soled shoes. People glared at him, but it had no effect.

The young Wynand wants to know why these people are rich and the people in his neighborhood aren’t, and decides that the most obvious difference is that the rich read books:

He decided to learn what was read by the people on Fifth Avenue. One day, he saw a lady waiting in a carriage at the curb; he knew she was a lady — his judgment on such matters was more acute than the discrimination of the Social Register; she was reading a book. He leaped to the steps of the carriage, snatched the book and ran away.

…It was a volume of Herbert Spencer. He went through a quiet agony trying to read it to the end.

Again, this is much too revealing to not be an intentional aside. The book that gives Wynand the key to the world is written by Herbert Spencer, who twisted Darwin’s idea of natural selection into a moral imperative for human society. As Spencer said:

All legislation which assists the people in the satisfaction of their natural wants — which provides a fund for their maintenance in illness and old age, educates their children, takes care of their religious instruction, looks after their bodily health, or in any other way does for them what they may be fairly expected to do for themselves, arises from a radically wrong understanding of human existence. It wholly neglects the condition of man’s earthly being, and altogether loses sight of one of the great and universal laws of creation.
(source)

Or from another book:

Inconvenience, suffering, and death, are the penalties attached by nature to ignorance, as well as to incompetence – are also the means of remedying these. (source)

Where Darwin only sought to describe what happens in nature, Spencer stretched this into a belief that it was right for the strong to thrive and the weak to perish – where “strong” and “weak”, naturally, were defined in terms of the class hierarchy of the day. It’s hardly surprising that Ayn Rand (and other libertarians) endorsed this belief, although it is a little surprising that Rand did so in terms that compare her heroes to a hereditary aristocracy.

Let’s digress and talk about one other thing mentioned in this chapter. In Ayn Rand’s era, rich people just glared at young punks like Gail Wynand loitering on their spacious boulevards. Nowadays, many wealthy neighborhoods explicitly design their public spaces to repel poor and homeless people. This trend has been dubbed “hostile architecture“.

To prevent people from sleeping in public, there are benches that are designed to be impossible to lie down on. To discourage sitting or loitering, there are windowsills and ledges covered in spikes, or unnecessary sprinklers. To stop skateboarders, there are benches and railings whose flat edges are deliberately interrupted with brackets.

All these unpleasant designs have the same purpose: restricting the use of public space, preventing people from lingering and forcing them to keep moving on. The goal is to create neighborhoods where you can only sit down, rest, or play if you buy something. Of course, none of these measures actually solve homelessness, poverty or other social problems; they just force people to congregate somewhere else. It’s the Randian ethic of “Not my problem”, applied to the design of cities.

June 20, 2018
Letter-Writing Wednesday: The Keep Families Together Act
Next Post