The Fountainhead: If It Bleeds, It Leads

Soon after taking control of a struggling newspaper that he renames the New York Banner, Gail Wynand lays out his strategy:

The first campaign of the Banner was an appeal for money for a charitable cause. Displayed side by side, with an equal amount of space, the Banner ran two stories: one about a struggling young scientist, starving in a garret, working on a great invention; the other about a chambermaid, the sweetheart of an executed murderer, awaiting the birth of her illegitimate child… The Banner asked its readers to help both these unfortunates. It received nine dollars and forty-five cents for the young scientist; it received one thousand and seventy-seven dollars for the unwed mother. Gail Wynand called a meeting of his staff… He said: “Now you all know the kind of paper the Banner is to be.”

This is meant to be a jab at the low morals of the public. However, what it really shows is that Ayn Rand bought into the sexist stereotype of the “perfect victim”. I mean, I’m all in favor of funding scientific research, but is she implying that it’s the wrong choice to support a single mother who was probably abused by her boyfriend? If she had been a married lawyer whose husband had died in a tragic accident, would she have been more deserving of charity?

This is probably another instance of Rand’s eugenicist morality showing through, given how the text emphasizes the the woman’s lower class and the “illegitimacy” of her child. What we’re meant to take away, I think, is that people like this aren’t deserving of help and shouldn’t be encouraged to breed.

This passage also shows the confused, inconsistent attitude to charity that Rand displayed in her earlier work and repudiated later on. In The Fountainhead, she took it for granted that almsgiving wasn’t necessarily bad. Even Howard Roark was willing to accept charity when he fell on hard times, not to mention his willingness to financially support his friend Steven Mallory.

By the time she wrote Atlas Shrugged, this attitude had changed decisively. In that book, a true Randian scientist would never offer or accept charity. He just toils away, expecting no support from anyone, until he comes up with a miraculous invention that changes the world and makes him rich. (You may remember Quentin Daniels, who worked in an abandoned university as a security guard while doing scientific experiments at night. This seems to be Ayn Rand’s model of how scientific progress always happens.)

In fact, the protagonists of Atlas consider it a grave insult if someone even offers to give them money or support them. Dagny Taggart was so violently opposed to charity that she scorns the idea of giving your loved ones gifts to make them happy.

Wynand’s official line, when anyone accuses him of having bad taste, is that he’s merely “representing the majority”:

When the name of Gail Wynand became a threat in the publishing world, a group of newspaper owners took him aside — at a city charity affair which all had to attend — and reproached him for what they called his debasement of the public taste. “It is not my function,” said Wynand, “to help people preserve a self-respect they haven’t got. You give them what they profess to like in public. I give them what they really like.”

Remember this line, because it will be important later.

The theme of The Fountainhead is individuality, but as I noted before, Rand doesn’t quite mean that in the sense of pursuing your own individual dreams no matter what they are. If that were the case, she’d support artists who create popular art, musicians whose music appeals to the masses, authors who write best-selling potboilers, or architects who build in classic styles, as long as those are the things they genuinely enjoy and want to do with their lives. (There must be people like that. By definition, popular things are popular because lots of people like them!)

A more accurate moral for this book would be that you should follow your dream if and only if it’s not what most people like. In Rand’s mind, true creators will always be misunderstood, hated and outcast. If you’re rich, popular and widely loved, that just proves that you betrayed your own soul by pandering to the worthless, ignorant desires of the masses.

This conclusion arises from the “second-hander” ideology that Rand held to when she wrote this book. If you like what other people like, that means you’re a worthless sponge who has no real dreams, thoughts or feelings of your own, just a set of phony preferences you’ve passively absorbed from those around you. Remember, when potential clients came to Roark asking him to build the houses they’d dreamed of all their lives, Roark rejected them and told them their desires were incorrect.

“When there’s no news, make it,” was Wynand’s order. A lunatic escaped from a state institution for the insane. After days of terror for miles around — terror fed by the Banner’s dire predictions and its indignation at the inefficiency of the local police — he was captured by a reporter of the Banner. The lunatic recovered miraculously two weeks after his capture, was released, and sold to the Banner an expose of the ill-treatment he had suffered at the institution. It led to sweeping reforms. Afterward, some people said that the lunatic had worked on the Banner before his commitment. It could never be proved.

This doesn’t exactly fit with Rand’s description of the Banner as a sleazy, unprincipled tabloid. It sounds like… real investigative journalism. Are we expected to believe it’s a bad thing to send an undercover reporter to expose the mistreatment of inmates at a state-run asylum? Especially if that story uncovers genuine problems and leads to real reform?

Rand’s description of this incident sounds like – and may have been based on – the pioneering female journalist Nellie Bly, who once posed as a mental patient and got herself committed to a New York asylum to write an exposé of the awful conditions there. Of course, after her release, Bly dropped the false identity. She didn’t try to keep up the pretense that she had always been mentally ill.

But this seems a completely unnecessary piece of dishonesty on Wynand’s part, since the point of the article was to expose the poor treatment at the institution and the ineptitude of the police. If anything, revealing the reporter’s real identity would have made the story better! To all its other revelations, it would have added the scandalous element that the courts and doctors couldn’t tell the difference between a mentally ill person and a journalist faking the condition.

A fire broke out in a sweatshop employing thirty young girls. Two of them perished in the disaster. Mary Watson, one of the survivors, gave the Banner an exclusive story about the exploitation they had suffered. It led to a crusade against sweatshops, headed by the best women of the city. The origin of the fire was never discovered. It was whispered that Mary Watson had once been Evelyn Drake who wrote for the Banner. It could not be proved.

Again, why is it a bad thing for journalists to expose the exploitation of low-wage workers and the hazards they face on the job? Rand seems to treat this as proof of the Banner‘s lack of morals. Or is she implying that this reporter set the fire herself to make her story possible?

In a bizarre way, this would fit with Rand’s oft-expressed idea that regulation makes jobs more dangerous. We saw in Atlas Shrugged that she insisted coal mining was perfectly safe until meddling government safety inspectors got involved, notwithstanding statistics that show the exact opposite. It would be consistent with this attitude for her to believe that sweatshops are just fine and no one would ever be hurt or killed working there, if not for those nosy journalists who sneak around setting places on fire so they have something to write about in the evening edition.

The obvious inspiration for this is the Triangle Shirtwaist Factory fire in 1911, where 146 people, mostly women, burned to death. The sweatshop’s owners had locked the exit doors to stop their workers from taking unauthorized breaks. There was a single flimsy fire escape, but it collapsed under the weight of people crowding onto it, spilling them to their deaths on the pavement below. Dozens more people died when they jumped from eighth, ninth and tenth-floor windows in a doomed bid to escape the flames.

Since this is a problem that architecture could solve, it seems like a missed opportunity that Rand never tried to connect this to the main plot of The Fountainhead. She could have written something about how Roark’s buildings save lives – more exits, say, or big wide hallways for workers to escape through, or sturdy fire escapes integrated into the design of the building rather than tacked on as an afterthought. Then again, the kind of people who die in sweatshop fires seem to be, in her eyes, the wrong kind of people. Why care what happens to them? 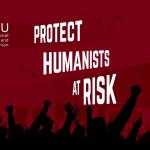 June 27, 2018
Support the IHEU's Humanists At Risk Campaign
Next Post