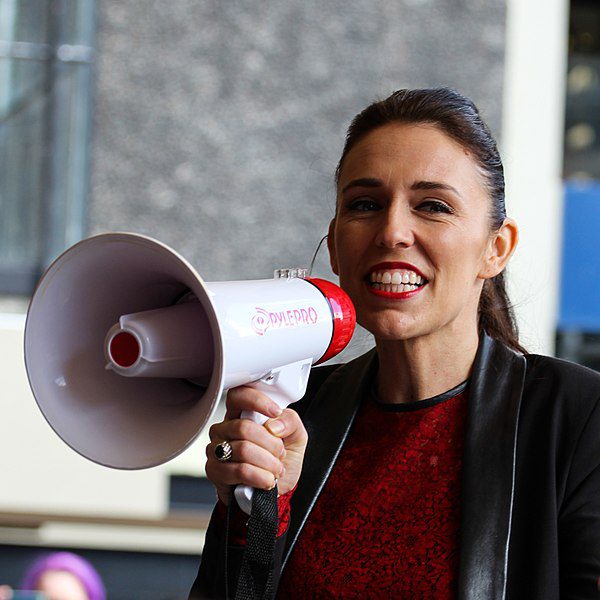 If you’re feeling discouraged or disheartened by the state of the world, I’d like to remind you that there are cracks of light around the edges, hints of a coming better future. Ireland’s overwhelming pro-choice victory was one, and here’s another. Meet New Zealand’s newest prime minister, Jacinda Ardern:

The executive wing of New Zealand’s parliament is nicknamed — for reasons immediately obvious to anybody who has seen its exterior — the Beehive. And fittingly, three days after its newest occupant has moved in, the ninth floor is buzzing.

Bubble-wrapped possessions and cardboard boxes clutter many of the rooms now inhabited by aides to Jacinda Ardern, who, on Oct. 26, and at the age of 37, became the world’s youngest female leader.

… “I have a collection of ukuleles,” she tells TIME, flashing a smile that is Obamaesque in its breadth and warmth. “I meant to graduate to the guitar but I never did.”

At age 37 (!), Ardern is the country’s youngest prime minister in 150 years and only the second elected female head of state ever to give birth in office. Her daughter was born in June, and since then, she’s been on a six-week maternity leave – yes, she took maternity leave from being prime minister – leaving her deputy Winston Peters temporarily in charge. Her partner, Clarke Gayford, is a New Zealand television personality but plans to become a full-time stay-at-home dad once she returns to work.

Ardern led New Zealand’s Labour party to an astonishing come-from-behind victory. The party had one of its all-time worst poll results just a few weeks before the election last September, and then-leader Andrew Little resigned and passed the torch to Ardern, his deputy, in a bid to revitalize the party and bring in some fresh blood. It worked:

Her popularity was dismissed as “stardust” by her opponent, the National party’s Bill English, who anticipated that her honeymoon period would be short-lived. But he was wrong. Young voters and women championed Ardern’s vision, and she quickly became known for her wit and backbone when facing opponents.

From Auckland convention centres to grimy pubs on the west coast, Ardern’s personal popularity drew huge crowds around the country – an outpouring that was dubbed “Jacindamania”, and led to comparisons between Ardern and “rock star” politicians such as Barack Obama and Justin Trudeau.

There’s a lot to like about her political views. One of her signature initiatives was making higher education free. She wants to make New Zealand carbon-neutral by 2050 and to increase paid parental leave to 22 weeks. Furthermore, according to Wikipedia:

Ardern has described herself as a social democrat, a progressive, a republican and a feminist… and has called capitalism a “blatant failure” due to the extent of homelessness in New Zealand.

…On social issues, Ardern voted in favour of same-sex marriage and believes abortion should be removed from the Crimes Act. She supports the decriminalisation of cannabis, pledging to hold a referendum on the matter in her first term as prime minister. In 2018, she became the first prime minister of New Zealand to march in a gay pride parade.

And here’s one more tidbit I can’t resist adding: she was a former president of the International Union of Socialist Youth.

Ardern was raised Mormon, but quit in protest of the religion’s anti-gay dogma and now describes herself as agnostic:

She was in her 20s when she left the Mormon faith, mostly as a consequence of its anti-homosexual stance.

“For a lot of years, I put it to the back of my mind. I think it was too unsettling. If something like religion is part of your foundation, and then suddenly you start questioning that – it’s quite a confronting thing to deal with.

“Even before the Civil Union Bill came up, I lived in a flat with three gay friends and I was still going to church every so often and I just remember thinking ‘this is really inconsistent – I’m either doing a disservice to the church or my friends’. Because how could I subscribe to a religion that just didn’t account for them?”

“I can’t see myself being a member of an organised religion again.”

Does she talk to God?

“No. But I have a real respect for people who have religion as a foundation in their lives. And I respect people who don’t. I’m agnostic. I don’t spend a lot of time trying to figure it out. I just think people should be free to have their personal beliefs and not be persecuted for it, whether they be atheist or staunch church members.

“I do draw a line if people are being taken advantage of – for instance, the tithes in some churches. I feel very strongly about that.”

To be sure, she faces challenges ahead. Labour made huge gains in the election, but didn’t win an outright majority and is in a coalition government with the Greens and a right-leaning anti-immigrant party, New Zealand First. Reconciling their dissimilar views is going to be a demanding exercise in political needle-threading. (Ardern has said she wants to reduce overall immigration as a response to wealthy foreigners buying up land in New Zealand, but to increase the number of refugees admitted.)

There’s also the predictable sexism, like the Australian 60 Minutes reporter who gushed over how attractive she was and badgered her for information on exactly when her baby was conceived. But she’s proved herself adept at hitting back on these retrograde views:

On her first day as opposition leader, Ms Ardern was controversially asked by a TV talk show host whether she had made “a choice between having babies and having a career”.

Ms Ardern replied that such a question was “totally unacceptable in 2017”.

“It is a woman’s decision about when they choose to have children and it should not predetermine whether or not they are given a job or have job opportunities,” she said.

Jacinda Ardern is emblematic of the rising generation of progressives that’s going to run the world when the angry, hateful bigots die off. I’ll be watching her career with interest, and I can’t wait to see what the future looks like when more people like her are in charge.

Image: Jacinda Ardern campaigning at the University of Auckland, September 2017. Photo by Ulysse Bellier via Wikimedia Commons; released under CC BY 2.0 license.

July 18, 2018 No Qualms
Recent Comments
0 | Leave a Comment
Browse Our Archives
get the latest updates from
Daylight Atheism
and the Patheos
Nonreligious
Channel
POPULAR AT PATHEOS Nonreligious
1