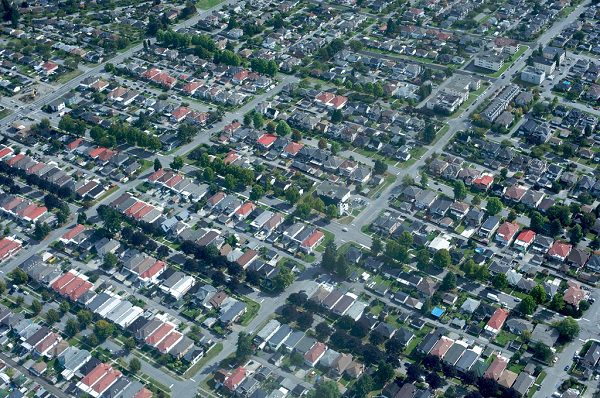 Gail Wynand is contemplating the latest addition to his real-estate empire:

On a large table in his office he spread out maps of Stoneridge, his new real-estate venture, and spent half an hour discussing it with two of his agents. He had purchased a vast tract of land on Long Island, which was to be converted into the Stoneridge Development, a new community of small home owners, every curbstone, street and house to be built by Gail Wynand. The few people who knew of his real-estate activities had told him that he was crazy. It was a year when no one thought of building. But Gail Wynand had made his fortune on decisions which people called crazy.

Gail Wynand hasn’t chosen anyone to design Stoneridge, although architects across the country are beating down his door. He’s turned down all their offers, either because he finds them unworthy or because it amuses him to mock their desperation, or both. But when Ellsworth Toohey requests an appointment to see him, he agrees because he thinks it’s on newspaper business:

“Oh, I’m much more presumptuous than that, Mr. Wynand,” said Toohey gaily. “I didn’t come to ask for your services, but to offer you mine.”

When Gail Wynand asks why he should care about Toohey’s recommendation, Toohey protests that he’s the Banner’s architecture expert, to which Wynand laughs, “My dear Mr. Toohey, don’t confuse me with my readers.”

Toohey says he foresaw this, so he took the liberty of sending Wynand a present he’ll see when he gets home that night:

“Toohey, this is unbelievable, but I believe you’re offering me a bribe.”

“You know, that’s the sort of stunt you should be allowed to get away with completely — or lose your job for.”

“I shall rest upon your opinion of my present tonight.”

That night, Wynand finds a mysterious wooden crate that’s been delivered to his penthouse. He can’t imagine what it might contain, and after spending the evening puzzling over it, he gets a crowbar and breaks it open.

It turns out that Toohey’s present is Steven Mallory’s statue of Dominique Francon, which Toohey secretly rescued from the ruin of the Stoddard Temple. Because Toohey can read minds, he knows that Wynand is an Objectivist in the depths of his soul; and because all Objectivists have exactly the same aesthetic tastes, he knows that this gift will appeal to him.

Wynand summons Toohey for a second interview, grudgingly confessing that he’s impressed: “You wouldn’t have risked it, unless you were sure, terribly sure, of how great a work of art this is. Sure that I’d have to accept it. That you’d beat me. And you have.”

Wynand asks the name of the sculptor, to which Toohey dissembles: “It’s Steven … or Stanley … Stanley something or other … Honestly, I don’t remember.” He asks if Toohey is giving him the statue on the condition that he meet Peter Keating, but Toohey explains that the statue is a free gift. It’s intended to whet Wynand’s appetite for the meeting, because the woman it depicts is “Mrs. Peter Keating”.

Toohey stared at him, bewildered.

“So you really did use this as a red lamp in a window?” Wynand seemed relieved; he did not find it necessary to hold Toohey’s glance now. “That’s better, Toohey. You’re not as smart as I thought…. Oh, she’s probably beautiful. She might be more beautiful than this. But she can’t have what that sculptor has given her. And to see that same face, but without any meaning, like a dead caricature — don’t you think one would hate the woman for that?”

In spite of his skepticism, Wynand does like the statue, and he’s amused by Toohey’s shameless appeal to his reputation as a womanizer, so he agrees to meet with Keating:

“You’re a poor businessman, Toohey. I don’t know why you’re so anxious to have me meet Mrs. Keating. I don’t know what your racket is in trying to get a commission for that Keating of yours. But whatever it is, it can’t be so valuable that you should have been willing to part with a thing like this in exchange.”

At first, I thought Stoneridge was Rand’s version of Levittown, the quintessential American suburb, which was built by the firm of Levitt & Sons as a planned community for returning GIs after World War II. But when I looked closer, I realized something surprising: Levittown went into construction in 1947. The Fountainhead was published in 1943. Ayn Rand anticipated the birth of suburbia! (Maybe she missed her real calling – instead of a writer, she should have been a real estate investor.)

Levittown symbolizes everything we think of when we think of the 1950s: the baby boom; the interstate highway system that nurtured the auto industry and the car-addicted American lifestyle; the suburbs as either an idyllic (white picket fence) dream of peace and prosperity or a symbol of stifling conformity, depending on who you ask.

Not coincidentally, the suburbs are also a symbol of racism. They enabled the first wave of white flight, as wealthy white families fled the cities rather than live in diverse neighborhoods. When Levittown was first built, its homes came with restrictive covenants specifying that they couldn’t be sold to buyers who weren’t Caucasian:

The whites-only policy was not some unspoken gentlemen’s agreement. It was cast in bold capital letters in clause 25 of the standard lease for the first Levitt houses, which included an option to buy.

It stated that the home could not “be used or occupied by any person other than members of the Caucasian race.” (source)

In some places, Levittown’s restrictive covenants also excluded Jewish families – which is especially shocking because the builder, William Levitt, was Jewish himself!

When challenged on this policy, Levitt said he was just responding to demand. He defended the restrictive covenants as a sad necessity given the number of racist homebuyers:

“As a Jew, I have no room in my mind or heart for racial prejudice. But I have come to know that if we sell one house to a Negro family, then 90 or 95 percent of our white customers will not buy into the community. This is their attitude, not ours. As a company, our position is simply this: We can solve a housing problem, or we can try to solve a racial problem, but we cannot combine the two.” (source)

But this seems too facile a defense, since Levitt actively battled against pro-integration and anti-bias laws in New Jersey and elsewhere.

As I’ve mentioned before, the federal government was no passive bystander in this segregated system. It actively reinforced segregation through housing loans that kept black citizens penned up in ghettos. (As that article notes, “This was the liberal position. Conservatives preferred to build no public housing for black people at all.”)

Although the Supreme Court struck down restrictive covenants in 1948, their effects linger into the present. Levittown is still overwhelmingly white, and studies have found that Long Island is the most segregated suburb in the nation, even today. Once segregation is set in place, it becomes self-perpetuating and is very hard to eradicate.

Did Gail Wynand plan to put restrictive covenants in Stoneridge? The book never says. Segregation in general was a topic that flew almost entirely beneath Ayn Rand’s notice. She said she was against racism, but said civil rights activists were equally guilty for “demanding special race privileges”. She called the Civil Rights Act of 1964 “the worst breach of property rights in the sorry record of American history”, because it forbade private business owners to discriminate. One can only assume that, like William Levitt, she would have been all in favor of excluding herself from comfortable, affordable housing, so long as that was what the market demanded.

July 9, 2018 Dystopia Journal #19: We've Lost the Supreme Court
Recent Comments
0 | Leave a Comment
Browse Our Archives
get the latest from
Nonreligious
Sign up for our newsletter
POPULAR AT PATHEOS Nonreligious
1