Is Social Media Making Everything Worse?

Most of the people I follow on Twitter are my friends, and I like catching up with their lives. It’s very possible I’ve missed hearing about some important life events by not logging on as much.

But I’ve found that the more time I spend on social media, the less happy I feel. Whatever the individual benefits of catching up with people I like, there’s a cumulative effect that clouds my thoughts and worsens my mood, like mental smog.

I’m not the only one who’s noticed. That’s the point of a feature article in the January 2019 issue of The Humanist by Mark Dunbar:

Social media is bad. It takes your worst parts — your vanity, your ignorance, your credulity — and makes them even worse. It weakens your ability to focus. It distracts you while you drive. It makes you hate people you should feel unity with and envy people you should find insufferable. It turns you into an addict… it also makes you more nervous, more panicky, more reflexive, more paranoid, and more distracted. That addiction is fed by fear, hatred, and contempt — the parts of you that fall for the cheap laugh, the cheap sneer, the cheap point, the cheap victory.

…There have been over a dozen books published just this year that show how social media brings out our worst impulses. Suicide, inequality, ignorance, hatred, fraud, depression, drug use, loneliness, obesity — pick your indicator of human misery and there’s likely a study cited in one of these books showing its linkage to social media.

The author Jaron Lanier, who encourages people to delete their social media accounts, coined an unsurpassable acronym for describing the root of the problem:

What’s to blame, according to Lanier, are the “structures” social media companies have built in order to make money. He calls it the BUMMER business model, which stands for “Behavior of Users Modified, and Made into an Empire for Rent.” A BUMMER business offers you a free service — with Facebook, access to the platform; with Google, free use of the search engine — and in exchange that business gets to collect data about you.

The article quotes a saying I like, and that’s worth bearing in mind every time you use social media: If you’re getting a service for free, you’re not the customer, you’re the product.

These businesses profit from our attention, which is a valuable commodity they can sell to advertisers. The more time we spend on their sites, the more ads they can show us. This means they have a built-in incentive to make their platforms as “sticky” as possible and to do whatever it takes to keep us from looking away:

What’s the best way to keep someone’s attention? One obvious way is to show people what they want to see: pictures of family, cheap tickets to local events, articles that validate their beliefs. Another way, however, is to show them things they hate. Or to show them things they hate being hurt or humiliated. Or to show them the most absurd or cringe-inducing representation of the thing they hate. (How many views does “Stupid Feminists Get Roasted Compilation #12” have?) As our ability to focus shrinks, the good doesn’t hold our attention as well as the bad.

Dunbar says that this this nurtures the most “authoritarian, paranoid, and tribal” viewpoints – the people who are always outraged or always afraid, who are most susceptible to these appeals. Worse, many social media sites are driven by algorithms which ensure that whatever content you like, you’ll be shown more of – which screens out moderating viewpoints and leads users down a rabbit hole of increasing radicalism.

And he argues, correctly in my opinion, that this tendency is especially appealing to right-wingers:

It isn’t a coincidence that the top ten shared stories on Facebook are always from right-wing websites….

This oppositional kind of politics requires perpetual outrage. One always has to be finding something the other side is doing that is ridiculous or pathetic. (And if alt-right media figures can’t find anything, they’ll just manufacture something, such as hire fake protesters to interrupt a speech.) And perpetual outrage is exactly what social media platforms want, because perpetual outrage means perpetual engagement. The BUMMER business model might bring all politics down, but it structurally favors politics that depend on persuasion over truth and negative emotion over moral scruple. And that kind of politics is found on one side more than the other.

This is what I said in my article “The Right-Wing Intellectual Abyss“, about how conservative clickbait sites that churn out ludicrous conspiracy theories have found an avid following. This didn’t begin with Facebook or Twitter – it’s basically the business model of Fox News – but social media has hugely accelerated the trend (especially since social media algorithms don’t just permit it, but reward it).

Of course, liberals aren’t immune to this tribal tendency. We love schadenfreude as much as anyone, and we certainly have our own clickbait sites that relish seeing our ideological opponents defeated or humiliated (“Good Guy X DESTROYS Bad Guy Y with a single speech!”). We’re no less capable of prejudice, anger or hate, whatever we try to tell ourselves.

But I think that what counterbalances this is the liberal belief in progress and positive change. We hope for a brighter tomorrow, which means we have to believe that people are capable of becoming better than they are. Even when we dwell in times and places that are theocratic, patriarchal, white supremacist, anti-intellectual, or worse, we have to hold that these traits don’t define humanity and that people are capable of rising above them.

There’s no such check or balance in conservative thought. By definition, social conservatives look to the past and not the future. They may believe in a mythical golden age that can be brought back, or they may believe that what we have now is the best we’ll ever get and all we can hope for is to hang on to it. Either way, they share with religious fundamentalists the belief that all necessary moral truths have already been revealed, and we just need to preserve them and defend them against attack.

This worldview encourages conservatives to always think of themselves as standing at the battlements, defending civilization. It’s a mindset that encourages them to see enemies everywhere they look – even if the specific nature of the enemy changes with cultural fashions. Sinister Jews, violent black men, man-hating feminists, decadent anti-family LGBT people, godless atheists who want to tear down America’s Christian heritage, job-stealing immigrants, Communist Russian fifth columnists, and many more have played the role of the enemy du jour.

This is more than just an academic problem, because the right wing cocooning itself in paranoia and marinating in rage leads inevitably to real-world violence. Another article in the same issue points out that the Pittsburgh synagogue shooter was imbibing right-wing conspiracy theories. And also:

Fascist violence is resurfacing in Germany, a nation that has dedicated enormous resources and self-examination to allay its Nazi past. One culprit stands out; as the New York Times reports, attacks on refugees there follow directly from hateful posts on Facebook.

…A study reported by Scientific American documents a similar problem here in the US: Donald Trump’s anti-immigrant tweets show a strong association with anti-Muslim hate crimes.

It would be nice if people could break themselves out of their own bubbles, but that seems unlikely. Sites like Politifact and Snopes, intended to filter truth from the flood of falsehood, haven’t made a noticeable difference. Nor do rationalist solutions like teaching critical thinking seem to be effective against the pull of motivated reasoning.

However, even with the general agreement about the downsides of social media, there hasn’t been a mass exodus from platforms. Why not? Because everyone has a reason to stay. Facebook is how we see pictures of our nephews. Twitter is our newsfeed. On YouTube we can find lectures on any topic we want and watch concert performances of the world’s best musicians and bands. Some people are straightforward and say they wish they could get off social media. But they can’t, because social media is designed to be addictive — and it is.

Does this mean there’s no solution? Are we stuck with social media even though it spreads misinformation, coarsens political discourse and emboldens the worst bigots?

I don’t have a good answer to this. Obviously, social media isn’t going away. But for me personally, I’m trying to use it less, and when I do log on, use it more selectively and mindfully – not as a distraction or a way of killing time. I don’t repost rage-bait and I try not to be drawn into pointless arguments with people whose minds aren’t going to change. These platforms thrive on our attention, whether it’s the good kind or the bad kind. If we don’t give it to them, that may be a way to diminish their influence, and ultimately, the harm they do. 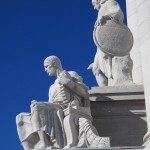 January 18, 2019 The Fountainhead: Neither Hurt Nor Help
Recent Comments
0 | Leave a Comment
Browse Our Archives
get the latest from
Daylight Atheism
Sign up for our newsletter
POPULAR AT PATHEOS Nonreligious
1