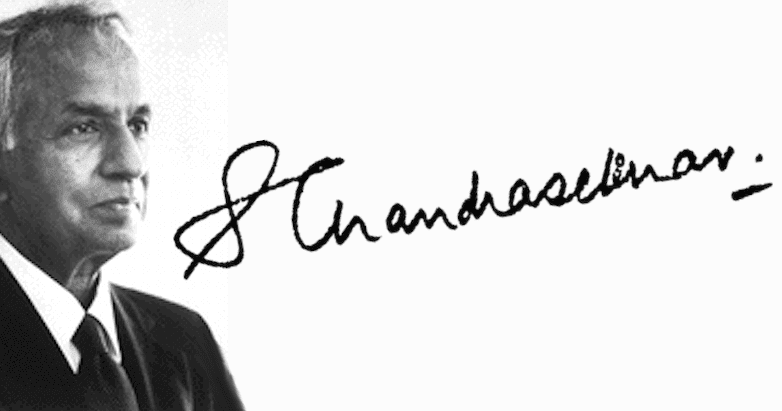 If you think adolescents are a pain, please consider my all-time favorite teen:

Subrahmanyan Chandrasekhar was born in 1910 in Lahore (now Pakistan) where his father was an Indian railway official. His uncle was physicist C.V. Raman, who won a Nobel Prize.

In that era, white dwarf stars had newly been discovered. They were amazing bodies: old stars collapsed by gravity until they were no larger than planet Earth. Their matter was unbelievably heavy – 10,000 times denser than steel, weighing 10 tons per thimbleful. They seemed almost inconceivable.

After attracting notice as a brilliant science student, young Chandrasekhar won an Indian government scholarship to Cambridge University. During the boat trip to England, at age 19, he pondered equations for the ultra-dense matter inside white dwarfs.

Other physicists had speculated that resistance by compressed electrons oppose the crush of gravity and stabilize a white dwarf at Earth-size. But Chandrasekhar’s calculations reached a stunning conclusion: If the mass of a collapsing star is more than 1.4 times the mass of our sun, gravity will overwhelm electron resistance. The larger star will continue collapsing.

The teenager’s findings were published and became known as Chandrasekhar’s Limit. Other scientists scoffed at his theory. The great astronomer Arthur Eddington publicly declared that laws of nature would “prevent a star from behaving in this absurd way.”

But Eddington was wrong. Like many aging scientists, he was locked into past beliefs, unable to accept new concepts. Younger geniuses eventually would surpass him. (An old wisecrack says that science advances funeral by funeral.)

In ensuing decades, astrophysicists discovered that Chandrasekhar had unlocked something incredible: As larger stars collapse, electrons are squeezed into protons to form solid masses of neutrons. The substance of a neutron star weighs an astounding 10 million tons per thimbleful. And still-larger stars collapse into unthinkable black holes that defy comprehension.

Chandrasekhar became a professor at the University of Chicago, where he pursued many venues of physics. In 1983 – a half-century late – he was given a Nobel Prize for his teenage breakthrough. (When reporters came to tell him the Nobel news, he said he must hurry to class. But he wasn’t teaching the class – he was a student in it, in his 70s.) He died in 1995 at age 84.

Although raised a Hindu, Chandrasekhar scoffed at supernatural religion. In public discussions, he said: “I am not religious in any sense. In fact, I consider myself an atheist… I can characterize myself definitely as an atheist.”

He fit a well-known pattern: Most of the world’s most brilliant thinkers, scientists, writers, philosophers, democracy reformers and others called “great” cannot accept magical gods, devils, heavens, hells, miracles and other religious dogmas.

Today, when I see brilliant teens at the National Youth Science Camp in West Virginia’s mountains each summer, I look at their keen faces and wonder how many will make breakthroughs. They share Chandrasekhar’s spirit of wonder and intense inquiry. They’re inspiring.

In contrast, when I see university students at Morgantown screaming their lungs out at football games and burning couches in drunken street parties, I wish something would jolt them into awareness of the true meaning of advanced study. They need to see the profound potential of learning.

Today’s teens are tomorrow’s citizens and leaders. It would be splendid if more of them could follow the purpose-driven life of Subrahmanyan Chandrasekhar.

(Haught is editor of West Virginia’s largest newspaper, The Charleston Gazette, and a senior editor of Free Inquiry. This article previously appeared in Free Inquiry, fall 2015.) 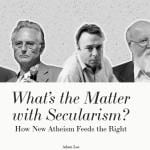 February 18, 2019
New on PRA: How New Atheism Feeds the Right
Next Post

February 22, 2019 The Fountainhead: Who's Afraid of a Little Gentrification?
Recent Comments
0 | Leave a Comment
Browse Our Archives
get the latest from
Daylight Atheism
Sign up for our newsletter
POPULAR AT PATHEOS Nonreligious
1